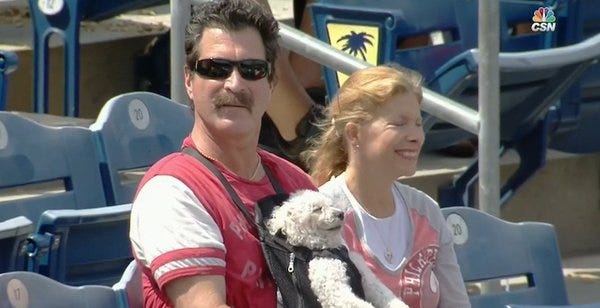 There’s not a lot in this world that I actually believe in. But if there’s one thing out there that I know for a damn fact exists, it’s good juju and bad juju. And when a Phillies fan with a Grade A mullet and a Grade A mustache comes to watch a spring training game in Clearwater carrying the chillest pup of all time on his chest…well that juju is of the greatest variety. It’s that kind of juju that will allow you to overcome getting dominated for 7 scoreless innings and then coming back to shell the Astros’ bullpen for the final 2 and come away with the 8-4 win. Sure, some teams may focus on having “good baseball players”. Some teams may shy away from having “overpaid prima donna jackasses” playing 1st base for them. Hell, some teams may even try to avoid coming 1 game away from a 100-loss season. But the Philadelphia Phillies? Well their secret to success is just a man and his dog. The dude has cool uncle written all over him. Probably downs a case of Yuengling and two packs of Marlboro every day like the True American he is. Bring the ol’ lady and the pooch down to the ballpark, catch a nice farmer’s tan, maybe a foul ball or two and let the magic all work itself out. He’ll see the rest of you bitches once the Phils are playing some October baseball again.