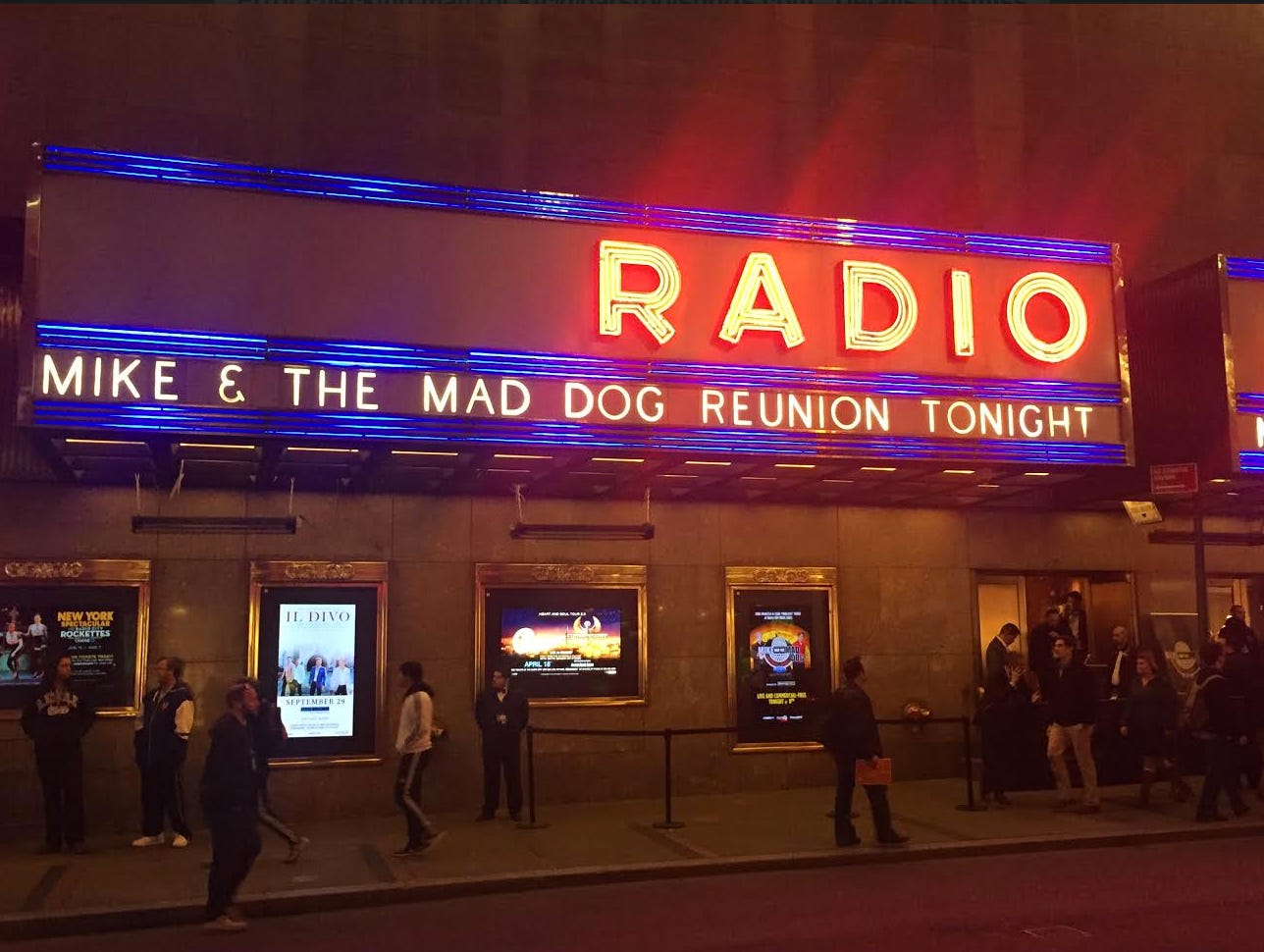 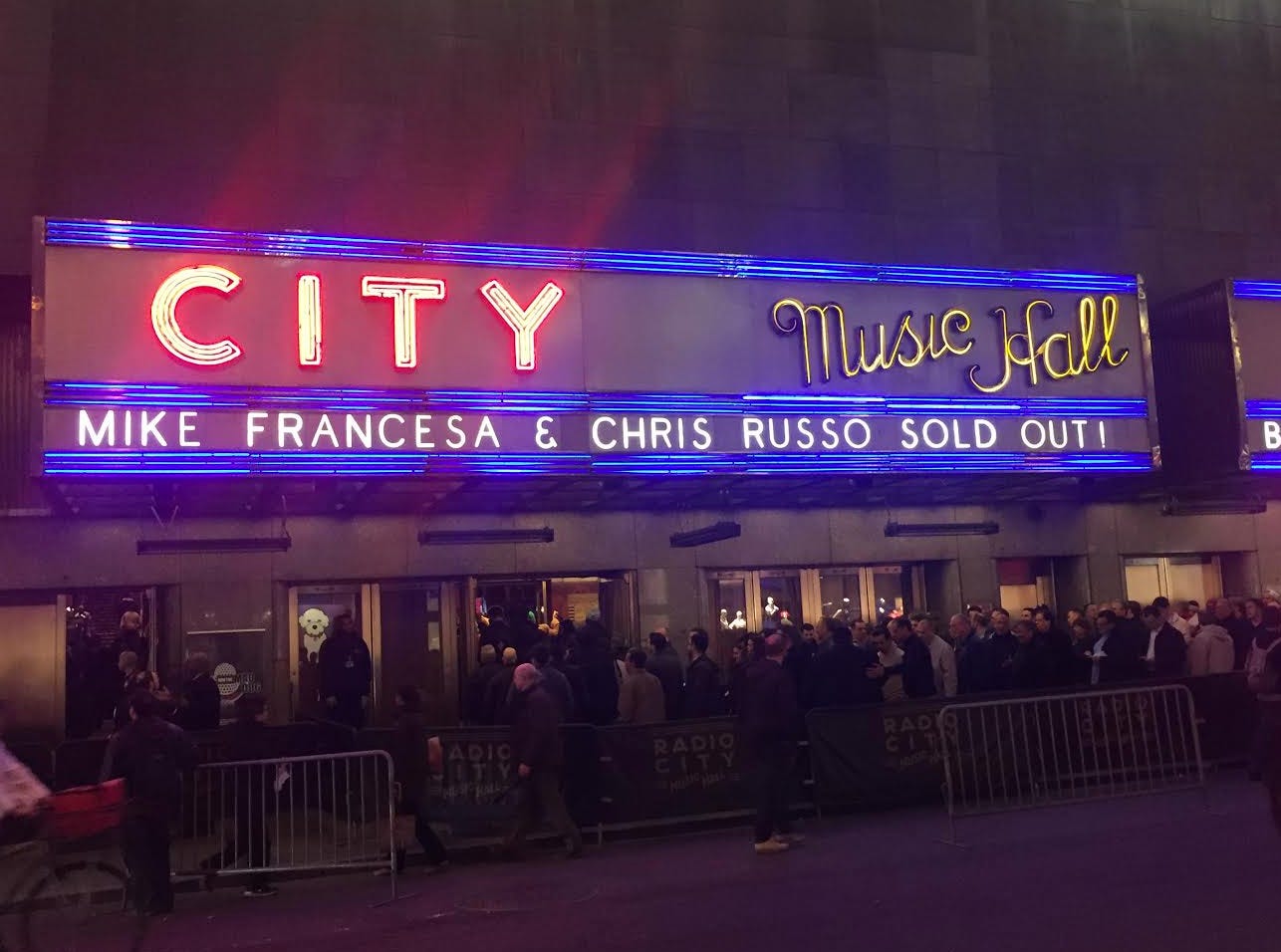 Last night I paid top dollar to see two old Italian dudes talk to each other on stage and you know what? It was a fantastic show. I’ll be perfectly honest as soon as they announced they were broadcasting it and airing it on TV I was on the fence about the night. Seemed like a hassle. As with everything else in life, I hate having plans. The satisfaction of canceling plans was just a quick decision away.

But I ended up sticking it out and I’m very glad I did. Mike and Dog put on an absolute show. They rocked headset mics like they were the Sham Wow guy at an infomercial. They walked back and forth on stage like they were evangelists preaching at one of those megachurches. Which, to be honest, is what they were doing. Mongo Nation was the congregation for the night, and the place was packed. Line out the door and almost to 5th Ave:

Dudes for miles. The women’s room at Radio City last night was the loneliest place on earth.

The crowd was laced with a who’s who of New York City. A-list stars such as myself and Rico Bosco. John Minko and Bob Huessler. Ryan Fitzpatrick, Justin Tuck and the dude from the Sopranos. 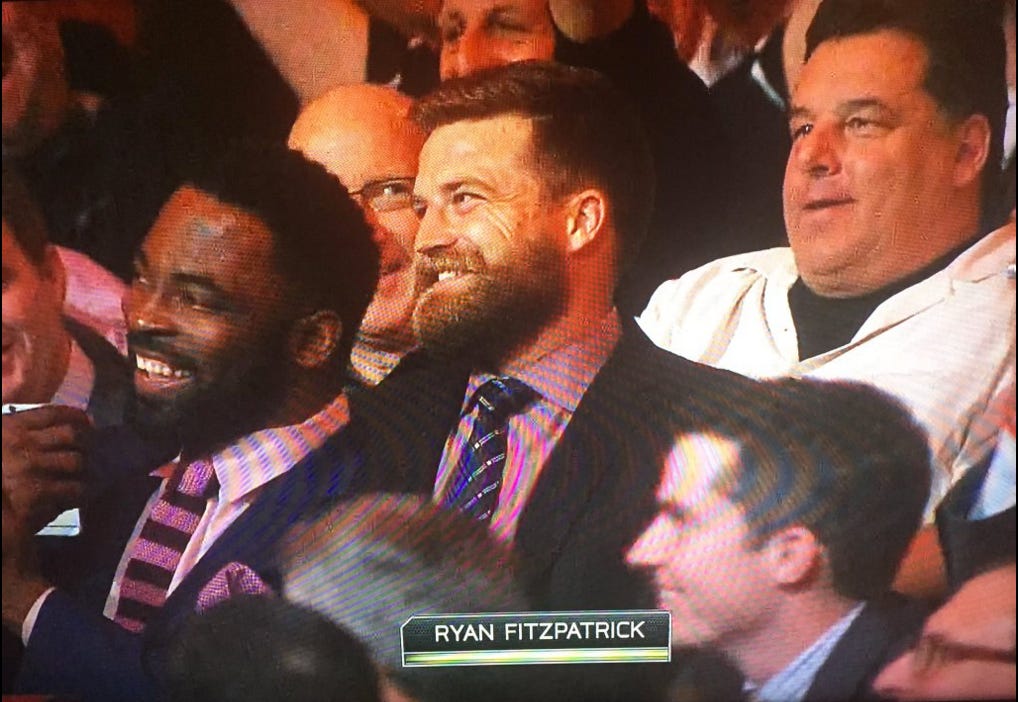 Oddly enough I think Ryan Fitzpatrick got the biggest applause of the night. Guests included. The crowd went bananas for Fitz. Best part was Fitzpatrick sticking it out for all 3 hours. Any of the celebrities in the crowd slowly peeled off after a little bit. Had better things to do than sit around with mongo idiots all night. Not Fitz. Dude stayed to the bitter end. Dog was screaming at him to sign the contract and he just say there and took it all night. Makes me wanna give him 18 mil a year now.

Anyway the show itself basically just became a cross between a live sports podcast and a comedy show. Before the show Russo said they could have read the phone book and the crowd would have been happy. Its true. The savages in the upper deck sitting with Rico Bosco were basically blacked out and yelling ridiculous shit at the stage all night long. They could have mailed it in and those animals would be happy. But they didnt. They put on a full, real 3 hour show and the chemistry between the 2 of them was there instantly. The back and forth was like they never left. Dog playing poor and asking for some of Francesa’s money – Mike calling Russo cheap. Telling the story of when Mike sent Dog on a date to see the show Cats, Mike seamlessly slides in with “What else do you send a Dog to see?” Any other duo alive I’d say some of this stuff had to be rehearsed and planned but not with these two. Their rehearsal was 1989 to 2007. Mike had about a dozen laugh out loud one liners throughout the night. Russo playing the perfect foil. No better combo in the world of radio.

The guest lineup was a bomb squad of NY legends. Coughlin, Messier, Bobby Valentine and Jeff Van Gundy. And while the crowd came for Mike and Dog and their interactions, the interviews were actually legit. Bobby Valentine was a fucking riot. If that dude doesnt have his own podcast, he should join up with Barstool Sports. There’s a big void right now in podcast content, Bobby V would be perfect. Joe Torre telling stories about closed door meetings with Steinbrenner when the Yanks were down to the Braves in the series. JVG spinning yarns about the 90s Knicks with brutal honesty about hoops. Messier basically told everyone he liked playing for Edmonton better than the Rangers but even he was good when talking about The Guarantee.

Best story of the night was learning that Mike’s wife saved Mike and the Mad Dog. Mike and Dog were in a 6 month feud where they werent speaking to each other. The guys did a fucking 2 man radio show without talking to each other for half a year. And the only reason tensions eased up was Mike’s wife Roe sending Doggie an invitation to their wedding. Mad Dog thought Mike had sent it, Francesa just laughed and pointed at his wife in the crowd and the place broke out into laughter.

As for Mike and Dog in the future, when asked if there was ever a chance of them getting back together, Mike simply responded “Nevah say nevah.”