MLB - The Orioles have placed right-hander Miguel Gonzalez on release waivers, multiple sources confirmed to MLB.com on Wednesday afternoon. The Orioles have not confirmed or commented on the transaction. Once a player is placed on outright release waivers, it is irrevocable. Gonzalez could be claimed by other teams in the next 48 hours, but they would be on the hook for paying the remainder of his $5.1 million 2016 salary. The surprising move leaves the O’s rotation battle between Tyler Wilson and Mike Wright. The team didn’t receive much trade interest in Gonzalez this spring, and his poor Grapefruit League campaign didn’t help matters. The 31-year-old Gonzalez, once thought to be one of the most consistent forces in the rotation, posted three seasons with an ERA of 3.78 or lower with Baltimore from 2012-14. But he struggled with injury and underperformance last year, going 9-12 with a 4.91 ERA in 26 games (all starts). Gonzalez has had a poor spring, going 1-4 with a 9.78 ERA. 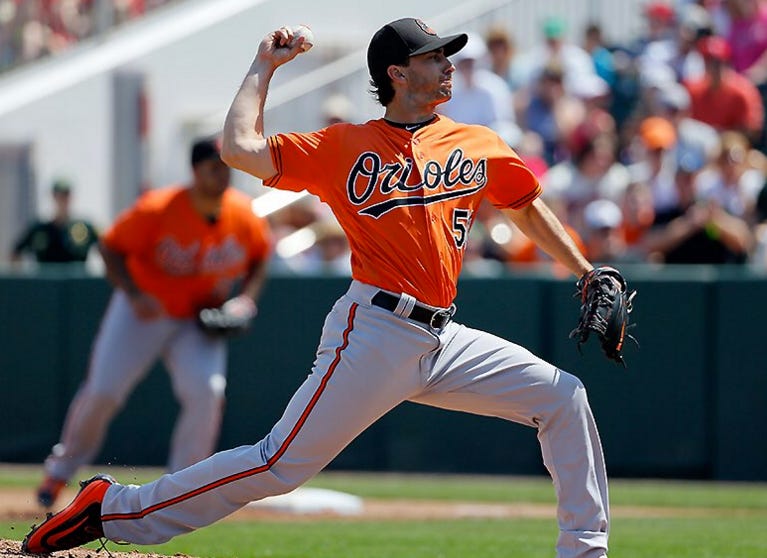 Well it happened, today the O’s said adios to Miguel Gonzalez. This is a move that surprises me, even though he’s been garbage lately. Gonzo struggled all spring training, and most of the 2015 season too. He had his worst season of his career last year, going 9-12 with an ERA just under 5.00 in just 144 innings.

However, Gonzo went 20-12 to start his Orioles career in 2012 and 13, and was a major reason the O’s made their playoff run in 2012. He was known as being consistent, which is often hard to find in the middle of a rotation. It seemed like he could never stay healthy after 2013, and just didn’t have the arm to go deep into games. Nearly all of his stats have increased since 2012 (WHIP, H/9, HR/9).

Gonzalez seemed to carry over his terrible 2015 season to spring training, and even with his great start yesterday, his performance in Sarasota did not warrant a rotation spot in the already shaky O’s rotation. I thought they would send him to the bullpen, or even AAA to see if he could find himself but I guess they decided to cut their losses.

This move now leaves the rotation in even worse shape than it was before. It’s looking like Tillman, Ubaldo, Gallardo, and Kevin Gausman when he comes off the DL, and then Tyler Wilson in that last rotation spot. While their offense may be top 5 in the league, their rotation looks like a bottom 5, but man do I hope they prove me wrong. I don’t think it’s asking too much for Tillman and Ubaldo to pitch to their highest potential.