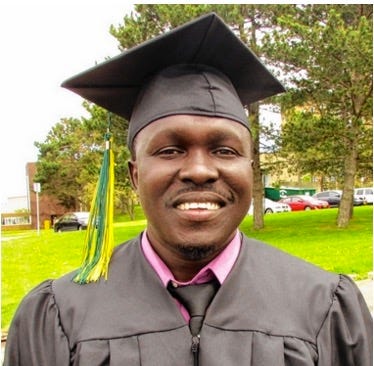 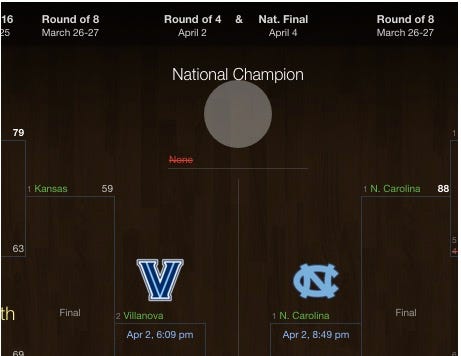 Syracuse – James Kiki went to work Monday morning and figured he should check on that bracket he filled out.

Unlike a lot of people across the country, Kiki, who lives in Syracuse, wasn’t checking his bracket regularly or even paying much attention to it at all. He filled out only one bracket, and he did so because he saw he could win $50,000 on Yahoo if he filled out a bracket.

“I was like, ‘What the heck. Let me just try it because, why not?” Kiki said. “That’s why I ended up filling one. I had never done one probably ever.”

So when he checked his bracket Monday, Kiki was surprised to see that out of over 500,000 entries in Yahoo’s contest, he was tied for first place. Then he realized he had messages from other Yahoo users telling him how stupid he was. Despite leading heading into the final weekend, Kiki has no chance to win Yahoo’s bracket challenge because he never finished his bracket. He didn’t pick a winner.

“I’ve been watching the games, but I didn’t even know what teams I picked,” Kiki said. “It’s crazy.”

Once he realized his mistake, Kiki was kicking himself. He said he was planning on picking Villanova to beat North Carolina in the championship game, but now he’s just rooting for Syracuse. Syracuse’s improbable run to the Final Four was a topic of conversation at On Point for College, where Kiki works, Monday morning. When his co-workers started asking what he thought of the Orange making the Final Four, he just shook his head.

“I don’t even want to think about it,” Kiki said.

Kiki, who is a refugee from South Sudan, was hoping there was some sort of consolation prize, but it’s a winner-take-all pool. Jahmo Syracuse is the name of the bracket Kiki says is his. His Final Four is perfect, and he’s made 48 correct picks out of 60 possible games. Without the winner, though, he has no chance of taking home the grand prize.

Listen jerk. If you think you’re going to get any sympathy you’ve come to the wrong place. If you think I’m going to feel bad for a guy who “wasn’t checking his bracket regularly” and “wasn’t paying much attention to it” or “didn’t even know who he had picked” you’re crazy. You know how much college basketball I watched this year? Know how hard I worked on my bracket? Know how many handwritten rough drafts I went through before finally coming up with the perfect one to post to millions of readers? Know how much heat and shit talking I had to take for those picks on comment boards and Twitter? I poured my heart and soul into it. And then was promptly eliminated from all contention by hour 4 of day 1.

So yeah, you seem like a good guy and everything. A refugee from South Sudan who graduated college, I admire that. But don’t think I’m not smiling ear to fucking ear at your misfortune and laughing as I stick a Michael Jordan face in your stupid unfinished bracket. 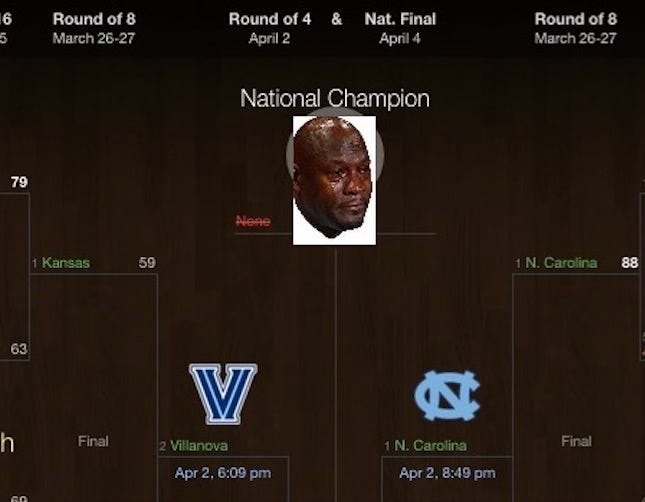 Oh, and Syracuse.com, give me a break.

“I haven’t even thought about filling one out next year,” Kiki said. “If I do, I’m going to make sure everything is saved before I hit submit.”

Anyone who has ever done a bracket in their life knows that there is never a next year. You have literally one shot of having a great, great bracket. And the better your bracket is that year, the worse it will be for the next decade. Just look at me last year compared to this year. I’m not going to sniff a top 20 finish until I’m at least 40.