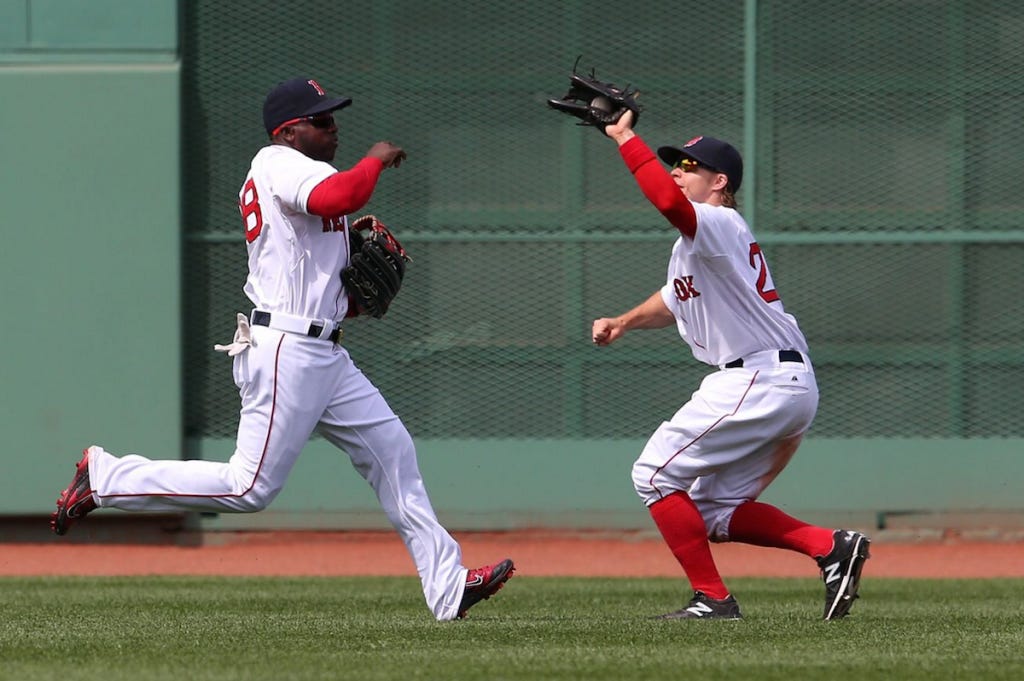 Just as the offseason had begun, Red Sox president of baseball operations Dave Dombrowski came on WEEI’s Hot Stove Show and said that there was “no question” that Boston would go into the 2016 season with Mookie Betts, Jackie Bradley Jr. and Rusney Castillo as their starting outfield.

As it turns out, Rusney Castillo will not be the everyday left fielder for the Boston Red Sox as Dombrowski said, and rightfully so. He’s done next to nothing since arriving on the scene in late 2014, and certainly hasn’t impressed this spring, either (.204 batting average, .504 OPS). If anything, all he’s really done is prove that he’s not a serviceable major league player. You shouldn’t pay too much attention to spring training statistics, as they’re not an indicator of performances to come. However, a red-hot spring can certainly propel you into the Opening Day lineup when there’s a position up for grabs, as we saw with Jackie Bradley Jr. in 2013 when he got the nod in left field after hitting .419 with an 1.120 OPS. Of course, he would not sustain those numbers, and here we are three years later, still wondering if he can hit consistently at the major league level, too.

But in regards to Boston’s current left field situation, it sounds like Castillo’s out, and Brock Holt is in, at least against right-handed pitching, which is a vast majority of the league. From WEEI.com’s Rob Bradford:

It appears to start the season Holt will be the Red Sox primary option in left field against right-handed pitching, with both Chris Young and Rusney Castillo being integrated into the position, as well.

If the Red Sox do bench Pablo Sandoval to start the year in favor of Travis Shaw, I can’t imagine that it will last very long. I understand that you should always go with the best lineup, regardless of contract obligations, but Sandoval does you no good off the bench. He’s not a utility infielder. He’s a third baseman. A fat one. A guy like Holt can come off the bench and play seven different positions, and that’s his greatest value to the team is his versatility. And while we’ve hyped up Shaw’s spring training numbers quite a bit, he’s cooled off as of late, and Sandoval has been heating up.

Now, that doesn’t mean that Shaw shouldn’t be in the lineup. He should. But Sandoval should be, too. I’ve written this before, but Shaw should be getting his at-bats in left field until Sandoval proves to be completely incapable of fielding the position, which isn’t as far fetched as it sounds.

Let us not forget — Holt is an All Star. But he was an All Star because he played a ton of different positions, not because he was an All Star left fielder. Despite a Dombrowski quote from November, Castillo shouldn’t be promised anything. He’s now a $72 million bench player. If you’re playing to win right out of the gate, your best bet is Sandoval at third, Shaw in left field against right-handed pitching, Chris Young in left field against left-handed pitching, and Holt continuing to be your super utility player.