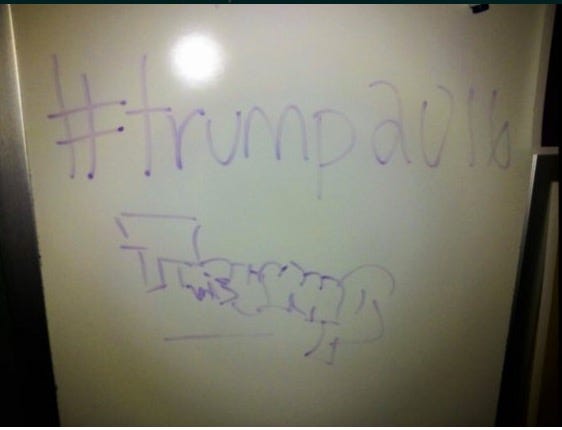 Fox – A California college student who claimed to have found a pro-Donald Trump message scrawled on the whiteboard outside her dorm room last week was so shaken that someone nearby might support the GOP frontrunner that she alerted campus police, according to a report.

“This morning, a Mexican-American Scripps student woke up to find her whiteboard vandalized with the phrase ‘#Trump 2016,’” Minjoo Kim, student body president at Scripps College, wrote in a March 26 email blast to classmates, according to The College Fix.

Although the message was not derogatory, Kim claimed the unidentified student perceived it as such because of her ethnicity. Trump has vowed to crack down on illegal immigration if elected president.

Kim said she alerted campus police to the “racist … violence” of the message, which simply read #trump2016.”

“This racist act is completely unacceptable,” Kim wrote. “Regardless of your political party, this intentional violence committed directly to a student of color proves to be another testament that racism continues to be an undeniable problem and alarming threat on our campuses.”

Kim’s email went on to say “campus safety has been notified and we hope to find the person responsible so they can be held accountable for their actions. … Mental and emotional health of our students are our top concern.”

But after the memo went out accompanied by a screenshot, some posters claimed to notice penmanship similarities between the pro-Trump message and one the Mexican-American student wrote drawing attention to it. One social media poster wondered if the idea of accusing Trump supporters of racism simply for supporting the candidate was inspired by a much-publicized incident at Emory University earlier this month. 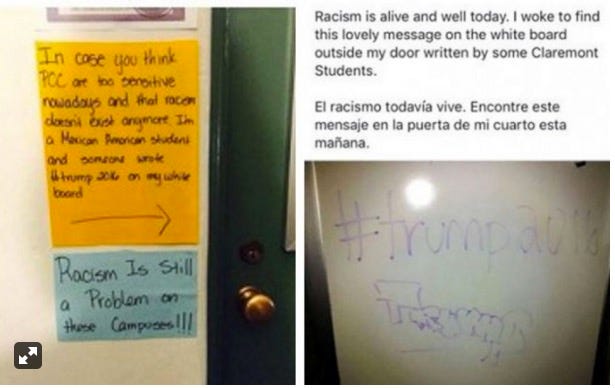 I missed most of the Town Hall last night, but I assume they addressed this right? How the biggest threat to our safety isn’t ISIS, it isn’t Al Qaeda, it isn’t lone wolf anti-Americans. It’s sidewalk chalk and dry erase markers writing out campaign slogans. I mean they are big on national security so they had to have at least mentioned it. First hateful, threatening chalkings at my old campus in Atlanta: 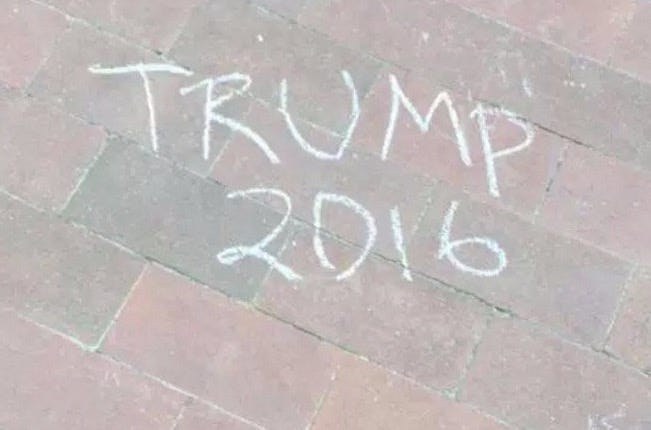 Now the jihad has spread all the way to California, this time with a felt tip marker and a dorm hallway whiteboard. You know what they say, the pen is mightier than the sword – once that pen starts writing “Presidential Candidate + Year He Is Running,” it’s basically the start of World War 3.

Live look at a college student meeting with administrators after encountering any sort of opinion different from their own: