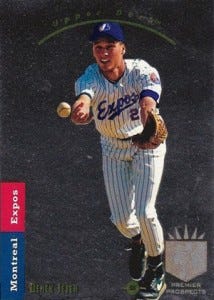 According to a report from the Boston Globe’s Nick Cafardo, then-Montreal Expos owner Jeffrey Loria wanted Derek Jeter so bad that he gave his general manager, Jim Beattie, free reign to offer everything the team had.

“I can’t trade Derek Jeter,” Cashman said, according to the report.

I hate reports like this because from a baseball standpoint, it’s easy to say “Two Hall of Famers is better than one.” If you look at the careers of all three players it’s clear that on the field, Vlad and Pedro combined had more value than Jeter over the span of their entire careers. I’m the biggest Jeter fan I know and even I can admit the numbers aren’t in Jeter’s favor but this decision is more than a baseball move.

Derek Jeter played for one team for his entire career and was the face of the New York Yankees for almost 20 years. Vlad and Pedro bounced around the league, playing for 4 and 5 teams respectively, which shows that there is no guarantee that if they were playing in New York they would want to stay. Even if they were to come to The Bronx and stay for the remainder of their careers, would they have become the leaders that the Yankees needed? Jeter played a key role not just on the field but by setting the tone that helped lead to 5 World Series titles. While Vlad and Pedro may not have had the supporting casts that Jeter had, they also weren’t know as serious leaders that could shape a clubhouse in a positive way to make sure the business of the day was handled.

Looking at the leadership reputation and the 5 titles that Jeter contributed to, it’s easy to say that the Yankees made the smart move here. Maybe if the trade happened we would have 7 titles but we also may have not won any and lost both players to free agency.

Plus when you factor in that Jefferey Loria didn’t become involved with the Expos until 1999, when Pedro was already in Boston and that this story is likely totally made up, it’s easy to see why it never happened.