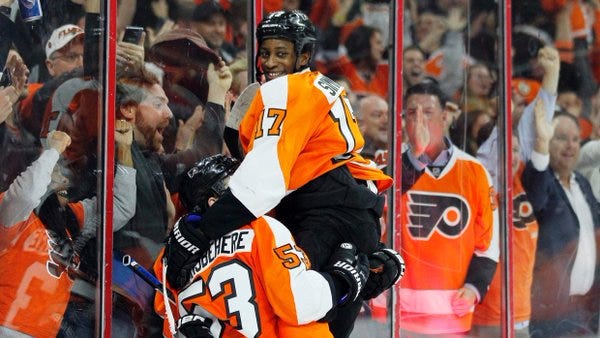 Now before we get started here, am I happy that the Flyers gave up their 2nd 2-0 lead to a team that’s not even close to being in the playoff picture in a week? Of course I’m not. It was a disaster against Columbus 7 days ago and it was tough to watch against Winnipeg last night. The Flyers have been handed this opportunity to get into the playoffs on a silver plater and they seem determined to make it as difficult as possible for themselves. I don’t know if this is a hot take or not but I know my buddy Trent Dilfer would agree; you can’t give up 2-goal leads in the NHL playoffs and still expect to win. So sure, the Flyers are fighting tooth and nail to keep their season going after April 10. But if they play against (probably) Washington like they’ve played over the last week, well it’ll be a quick first round exit. With that being said, the Flyers came out of last night with the 2-points that they desperately needed and that’s reason enough to not pour that shot of bleach in your coffee this morning.

What a night out of Sean Couturier. Lose puck in the corner, wheels it up the half boards, good on Mark Streit for getting himself to that back-pipe and then the needle was threaded and then some by Cooter Davis. Couturier logged 22 minutes on the ice last night, went 63% in the faceoff dot and got the boys going with this assist. I thought Raffl had another strong game on the puck last night and that 2nd line continues to be impressive. It doesn’t matter what 2nd line the Flyers roll out with, as long as you have competent wingers playing with Coots then you’re going to enjoy your possession numbers at the end of the game. I still see Voracek hopping back up with Claude and Simmonds once the playoffs start but for now, the top 6 is looking pretty damn sexy.

So this is one of those things that Brayden Schenn loves to do. Never once in his life has he scored an easy goal. They’re all ugly, greasy goals that he has to pull out of his ass and have deflected off his skate or whatever. A Brayden Schenn highlight tape would look more like a blooper reel than anything. So he has a perfect opportunity right on the doorstep to put the Flyers up by 2 and what happens? Somehow hits the pipe when he had 3 full feet of empty net to shoot at. But that’s just an unselfish play from Baby Schenn there because he knows that Wayne Simmonds is so close to his first 30-goal season of his career. That’s goal number 26 on the year for the Wayne Train and Schenn was just being a great teammate. That’s the thing about this team that I love the most. They all seem to genuinely love and care for one another. That type of locker room environment is going to be huge coming down the stretch here. You play for your brother to the left of you and your brother to the right of you. If that means you miss a wide empty net to make sure your brother can snipe one home himself, then so be it.

Hey Guys. Uhhhh…. What The Fuck?

I know that Wheeler wasn’t exactly VandeVelde’s man right here. I get he probably thought that Bellemare had him locked up. But just do yourself a favor and watch him coast all the way from the red line on this goal. Maybe takes about two half-strides and that’s it. Just a horrible breakdown all over the place. Also, this wasn’t the case on this specific play but we need to make note of something about the Flyers that has been pissing me off lately. They are fucking BRUTAL the next shift after scoring a goal. Anybody who has ever played a single game of hockey before has heard the phrase that the most important shift is the shift after a goal. The Flyers took a 2-0 lead off that Simmonds goal, have all of the momentum and then right away, BOOM, the Jets score on that next shift. You either need to stomp your foot on their throats after scoring a goal or you need to at least withstand that next 45-60 seconds of pressure. The Flyers just don’t have that in them right now for some reason. Whatever, let’s just watch that Gostisbehere play again to get it out of our minds.

I mean… it’s beautiful. What is there left to say about Shayne Gostisbehere that hasn’t been said already? The play was dead here. It was a great rush from Claude but Scheifele made an even better defensive play to break up that pass. Then, like the Heaven-sent human being that he is, Ghost was able to knock the puck through Scheifele’s legs while falling over, settle the puck, dish it off to Captain Claude and with 13.6 seconds left in the overtime period, Giroux spares the Flyers from the embarrassment of losing in another shootout. And even better than Ghost’s play on this puck was that Claude Giroux netted the game winner just 2 days after being knocked unconcsious on the ice against the Coyotes on Saturday night. Nobody knew if Claude was going to play last night or not. Pretty sure Simmonds said he didn’t know until gametime. But the Captain sacked up, showed up to work and got his team the 2 points they desperately needed. Goddammit do I love those two sons of bitches.

– Another strong night out of Sam Gagner. Didn’t do anything too spectacular to stand out last night but he’s quietly been finding himself a consistent role on this Flyers team. He’s dealt with plenty of shit over the last couple of years. He was shipped out of Edmonton, shipped out of Tampa just hours after being acquired by the Lightning, traded from Arizona. Since coming to the Flyers he’s had injuries to deal with, he’s been demoted to the Phantoms, it’s just nice to see him finally finding his game a little bit and being a piece to this team.

Philadelphia Flyers: “already way ahead of you” 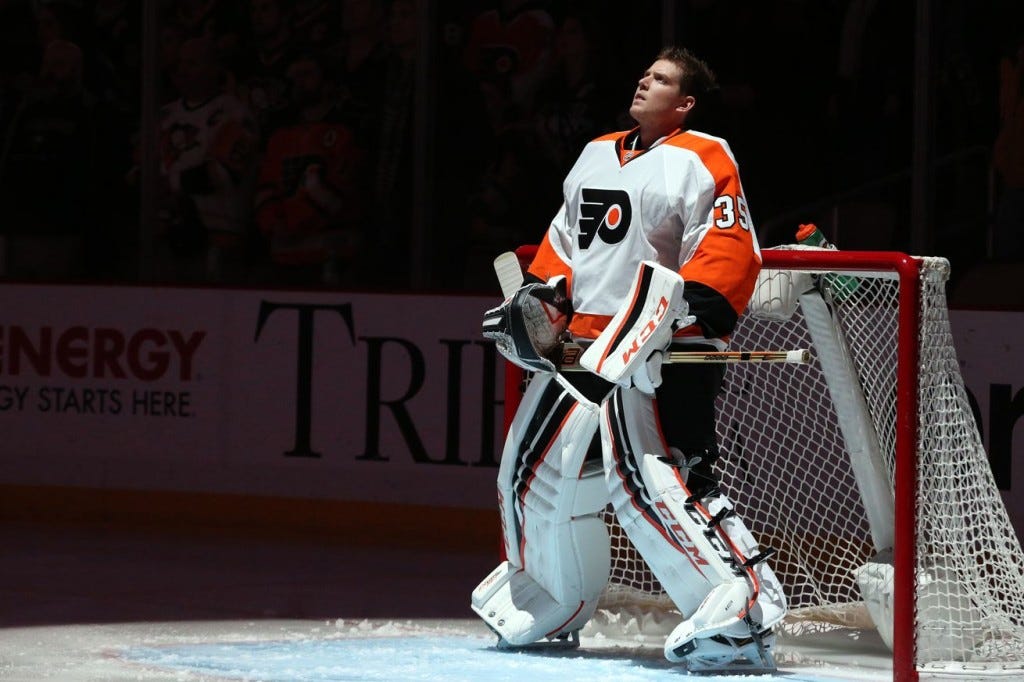 That’s 11 starts in 12 games for Steve Mason. 6 straight in which the Flyers have gone 3-2-1 but could have easily been 4-2 if they didn’t shit the bed so hard against Columbus. Steve Mason has been doing absolutely everything he can to will this team into the playoffs. Neuvirth is out for the rest of the regular season which leaves 7 more games left for Steve Mason to face. In those 7 games the Flyers face the Capitals tomorrow, the Red Wings once, the Penguins twice and the Islanders to close out the season. That right there is 5 games that he HAS to start. Maybe let Stolarz take either the Senators or the Maple Leafs but I think Steve Mason is trying to Iron Man this one and start the last 13 games of the season straight. If you’re somebody in Philadelphia who doesn’t think that Steve Mason is a #1 goaltender in the NHL after what he’s been doing over the past 2 weeks, well then I need you to hop the fuck off the wagon. Actually, this is a train. And I need you to get off of the train, step right in front of it and let the train run you over into a million pieces because you are a fucking idiot.

– Flyers didn’t take any penalties last night aside from Brandon Manning’s roughing call that also brought Ben Chiarot to the box. BREAKING NEWS: Not giving the opposition any power play time to work with is quite conducive to winning ice hockey games. Who woulda thought?