Kroq - It’s confirmed: Blink-182 will release new music soon. “We can expect to hear the first song in April,” reveals Lisa Worden, KROQ’s Music Director. Worden was treated to eight new songs when Mark Hoppus stopped by her office Tuesday. According to Hoppus, the band has recorded nearly 50 songs and is in the process of narrowing them down for the yet-to-be-named album.

Worden can speak with some authority. The band has played her every Blink-182 album before its release. “The music I heard rocks,” she says. “It sounds like Blink but it’s not anything that we’ve heard before. For fans of the band, they’re going to be super happy with it. It starts with Travis’ unmistakable drumming—it’s just that signature Blink sound—you immediately know who it is.”

Of the tracks that she previewed, Worden describes some as rock-leaning, reminiscent of Dude Ranch. There were a couple with really funny lyrics and I heard a ballad as well. “Mark singing the ballad was amazing. He sounded awesome.” Worden also noted producer John Feldmann’s influence, which she heard throughout the recordings. But the Blink project doesn’t sound like just another album for Feldmann. “I’d say it’s one of the best records I’ve ever made in my life.”

April, you say? Well let me pull out my trusted calendar real quick and take a look: 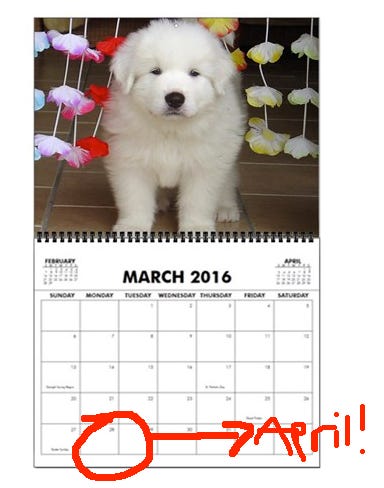 My heavens that’s only 4 days away! How lucky are we?? April is a mere 4 days away, which means new Blink-182 music is not far behind. And then a summer tour shortly thereafter. Tom can keep hunting for aliens, I have a strong feeling this Blink CD is going to blow Neighborhoods out of the water. And I like Neighborhoods. It’s decent. But I think it’s safe to say a happy band makes the best music, and even though I’m not sold on Skiba yet there’s no denying he is a fresh addition to the band and at least wants to be there.

PS: How lucky is Tom? He gets to be his weird ass self and make another Angels and Airwaves CD that sounds exactly like the last 4, and he still gets a piece of that Blink 182 money. I’m actually beginning to think he might never play with them again. At least for another 10 years or so. Mark can easily start a solo career, he does not need Tom at all. Tom needs Blink more than Blink needs Tom.