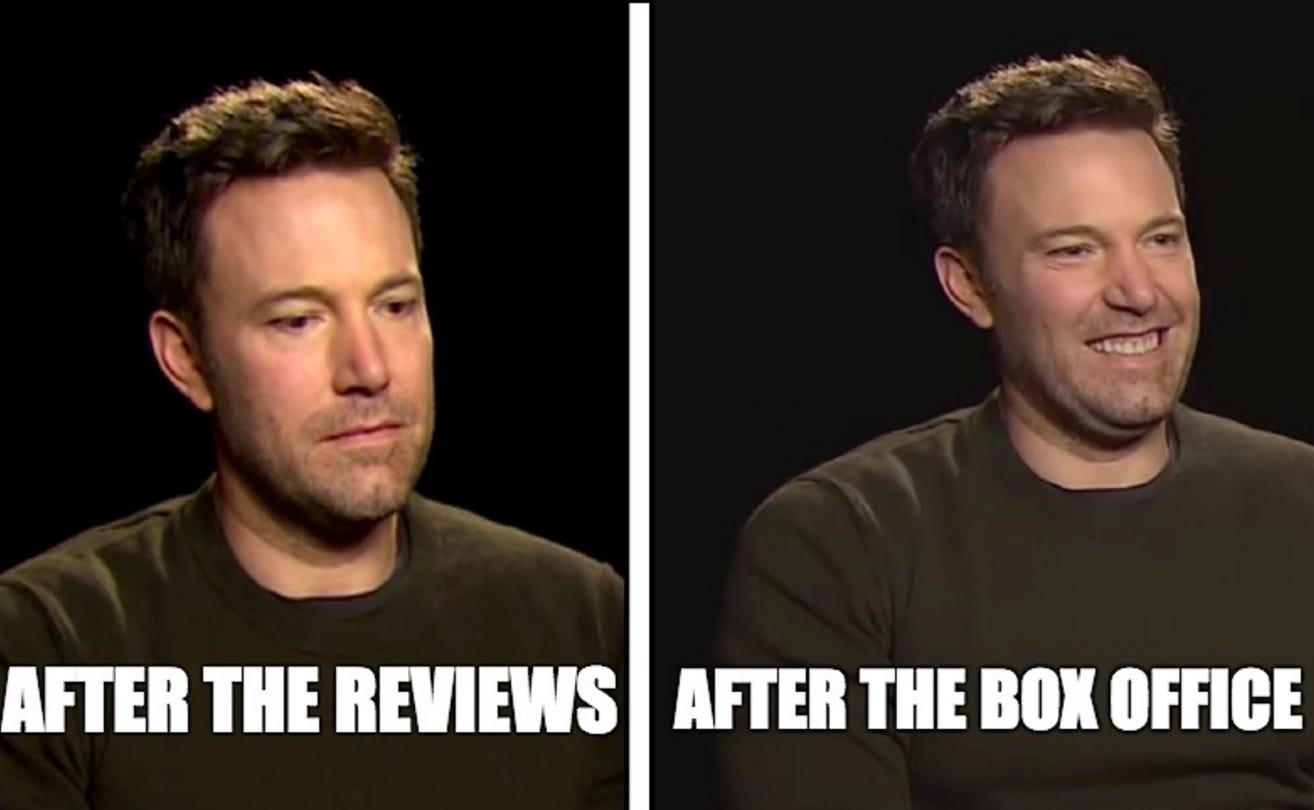 LOS ANGELES — As a box office megadraw, “Batman v Superman: Dawn of Justice” more than did its job, taking in an estimated $170.1 million in North America and an additional $254 million in simultaneous release overseas. But as a measure of the creative capabilities of a studio betting its future on a string of tonally similar superhero movies? Most critics evisceratedthe Warner Bros. film, which was directed by Zack Snyder, and audiences gave it a soft B grade in CinemaScore exit polls. Warner, which spent roughly $400 million to make and market “Dawn of Justice,” described the box office results as “phenomenal,” “sensational” and “fantastic.” Domestic ticket sales, fueled by higher-priced Imax, premium large-format theaters and RealD 3-D screenings, set a record for a March release, among others.  It was one of the largest rollouts in Hollywood history: Warner booked “Dawn of Justice” onto roughly 50,000 screens in 67 countries. “We’re absolutely jubilant about the way the fans embraced the film,” Jeff Goldstein, Warner’s executive vice president for domestic distribution, said by phone on Sunday. “To be this successful as we launch the DC Comics universe is really a triumph.” The real test for Warner and “Dawn of Justice” may lie ahead, however. Any movie with both Batman and Superman in its title had better turn out huge opening-weekend crowds. Financial success will depend on repeat visits by fans in the weeks ahead and attendance by older moviegoers, who tend to skip the initial hoopla. Analysts estimate that the movie will need to take in more than $800 million worldwide to break even, after accounting for revenue splits with theaters. (Boding well for Warner: “Dawn of Justice” faces light competition over the next two weekends.)  Questions also remain about Warner’s 10-movie “cinematic universe” of interconnected superhero movies. Mr. Snyder’s bleak “Dawn of Justice” was designed as the creative foundation for a multibillion-dollar string of films featuring the likes of Wonder Woman and Aquaman. Mr. Snyder is set to begin filming a two-part “Justice League” in the coming weeks. As Mike Sampson, editor of the fan site ScreenCrush.com, wrote last week before the numbers were in, “If the overwhelming sentiment is that the ‘Dawn of Justice’ doesn’t make you want to see Justice arrive, Warner Bros. has a supersized problem.” Is Warner concerned? “Not in the least,” Mr. Goldstein said. “While I respect the reviewers, the enormous turnout speaks for itself.”

I’ma tell you what Ben told me “Cuz, go head switch the style up, and if they hate then let em hate and watch the money pile up!”

Fuck you critics! Suck my dick, movie snobs! You think my 2 hour and fucking 40 minute super hero movie stinks? You think its sloppy and overly dramatic and dark and you think I suck as Batman and that other dude who sucked as Superman like 3 times in a row but keeps getting the job sucked as Superman again? Well I got 254 million reasons why you’re dumb. 254 million reasons why I’m right and you’re wrong.

Man thats gotta be the best feeling ever. Telling all the critics and haters to blow your dick as your movie is well on its way to grossing a billion. I’ll be perfectly honest – I thought this movie was gonna be a disaster. I still think the movie itself probably is a disaster. Not only critics but normal ass people are all saying how its long and shitty. But it doesnt matter when you’re gonna bank a billi. I think 2 hours and 40 mins it wayyyy to long for a superhero movie and these initial reviews of how bad it is took me from like a 10% chance of me seeing it in theaters down to a 0% chance, but theres a bazillion comic book maniacs out there who dont give a fuck what you, me, or the critics say. They’ll go see movies like this if they are 8 hours and 40 mins long. Good or bad. They’ll probably see it twice. It doesnt matter when you make a super hero movie. Those things are so goddam bulletproof its unbelievable. Best gig in the world is acting, directing, or producing those. You’re playing with house money from the minute its green lit. “Should we pay another 10 million for this explosion scene? Sure! We’ll make that back in an hour opening weekend!” “We could only edit it down to 3 hours. Is that ok? Yes! It doesnt matter what we put on this screen or for how long! We’re going to make 1 billion dollars regardless!” Its magnificent. Comic book movies are just in a league all its own.

And thats why movie critics just shouldnt review these things. You need someone like Barstool to review these super hero action blockbusters. Someone who the movie is actually geared towards. Nobody cares what the nerd movie journalist thinks about Batman fighting Superman. Of course the critics bashed it. They’re the type of people who say “film” or “cinema” instead of “movies.”