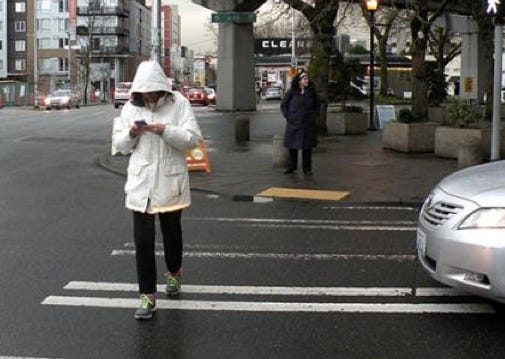 (Source) — Jared Schumacher is one of hundreds of thousands of New Jerseyans who routinely use electronic devices to text, listen to music or do other tasks as they walk outdoors. If a “distracted walking” measure recently proposed by a state assemblywoman becomes law, the Trenton man and others like him could face fines or even jail time. “I admit that I’m usually listening to music, talking on my phone or texting while I’m walking around,” Schumacher, 20, said while responding to a text as he walked along a street in the state capital last weekend. “I’ve never hurt myself, but I’ve seen people walk into poles or trip over a big crack in the sidewalk.” Experts say distracted walking is a growing problem, as people of all ages become more dependent on electronic devices for personal and professional matters. They also note pedestrian deaths have been rising in recent years. In 2005, 11% of all US fatalities involved pedestrians, but that number rose to 15% in 2014.  Violators would face fines of up to $50, 15 days imprisonment or both, which is the same penalty as jaywalking.

What the fuck? We’re trying to make it illegal to check Twitter and walk on a sidewalk in this great nation? That’s some of the dumbest shit I’ve ever heard in my entire life. I’ll admit that it’s probably not super safe to have people walking around cities with their heads buried in their phones while they try to cross the street, but that’s the 21st century trade-off: every thing takes longer and is more dangerous, but it’s more entertaining. Pooping used to take however long it takes to push poop out of your butt, now it takes three text convos, a Twitter check, and three Barstool posts (the danger here is pins and needles in your legs, probably the most dangerous one out of everything tbh). Walking has been taken down to half speed because it’s easier to watch sexy Instagram vids and doesn’t hurt when you crash into a telephone pole. Driving is done almost exclusively blind because highways are boring as shit and your snapchat feed isn’t (that’s a lie, Snapchat is also super boring, but it’s less boring than reality). These are the way the world works now. Walking and texting takes less brain function than walking and talking and I actually believe that. You have to think and listen in order to talk, our phone’s are just an extension of self at this point. It’s all second nature and white noise,just mindless thumbing to keep us busy until we get to our destination. If walking and talking is legal then walking and texting should be too.