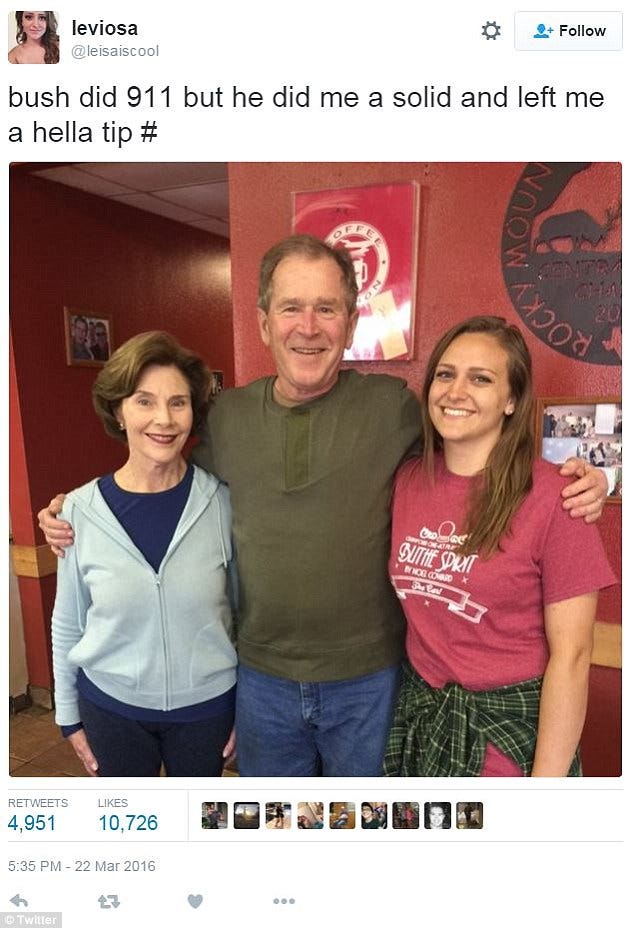 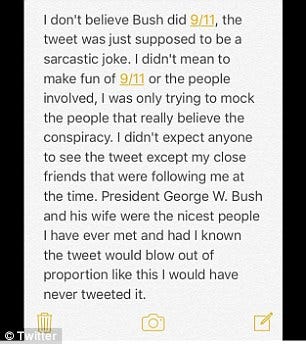 Daily Mail - A waitress who was given a $40 tip by George W Bush later trashed the former president on Twitter accusing him of ‘doing’ 9/11.  Smith tweeted a photo of herself with Bush and wife Laura and added: ‘Bush did 911 but he did me a solid and left me a hella tip #’. But Leisa Smith’s joke has backfired and many took to social media to call her out for her ‘insensitive’ and ‘stupid’ comments.  One tweeter commented: ‘Bush didn’t ‘do’ 9/11, terrorists did. Bush retaliated against them’. While another said: ‘I hope you work there till you 70 lol. You ain’t ready for the real world! haha #Stupid.’ And a user called Bob Koch wrote: ‘You gladly take his money and then dog him on social media? So disrespectful and uneducated. I hope you grow up and learn. Good luck.’  But Smith claims that she was ‘only joking’ when she sent the tweet and ‘doesn’t actually think that Bush ‘did’ 9/11. She told Mic: ‘I have a couple of friends that use the meme a lot and they were the only ones I was expecting to see the tweet.  Smith also tweeted a statement that re-iterated that it was only meant as a joke. She said: ‘I don’t believe Bush did 9/11 it was meant as a sarcastic joke. I didn’t mean to make fun of 9/11 or the people involved, I was only trying to mock the people that believe in the conspiracy.’ She also added: President George W. Bush (sic) and his wife were the nicest people I have ever met and had I known the tweet would blow out of proportion like this I would have never tweeted it.’  And while the $40 tip on the $21.47 bill was generous, the former president is currently valued at around $20 million, according to TIME.

Listen if you’re going to secretly sabotage your own country and secretly organize the worst terror attack on American soil, the least you can do is be a good tipper. I’m sure that’s George Bush’s whole M.O. Sort of like when you know that you and your table have been really drunk and rowdy and a real pain in the ass for the waitress. Or when you bring your kid to dinner and they scream and cry the whole time. You know when that bill comes you gotta hook that person up for all their troubles.

Well imagine how George Bush feels every time he gets a restaurant bill when he stops and thinks “Man, I ordered two planes to crash into the country’s largest buildings.” I bet GW is always like “I’m gonna leave 50%…hold on a second I killed thousands of Americans, better make it 100%.” I bet he runs around the country scribbling out 20% being like “Damn…I forgot…9/11. Gotta make up for it now.” Because I’ll be honest nothing makes you feel like a better person than leaving an enormous tip. That will clear a guilty conscience real quick. When you drop a baller tip you feel like you’re Zuckerberg leaving his billions to charity. You feel like you just made that waiter make rent this month. Leave a good tip and that’s your good deed for the week. Fuck, maybe even month. Now, GW Bush has gotta leave nice tips for basically the rest of his life in order to make up for doing 9/11 but at least he’s trying.