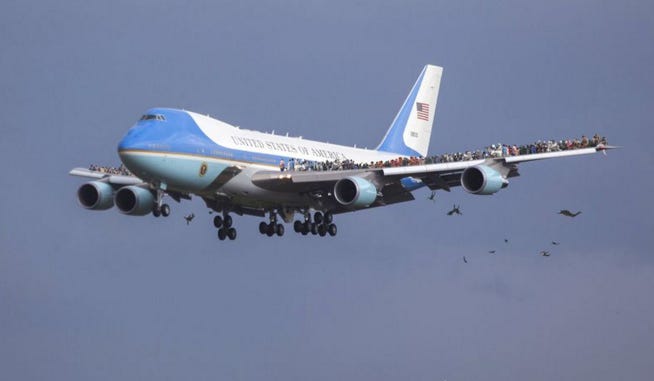 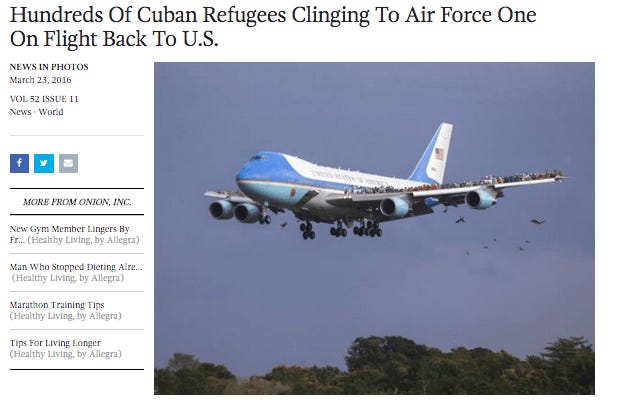 Dead State – Earlier this week, the beloved satire site The Onion posted a headline and photo that claimed hundreds of Cubans had clung to the wings of Air Force One, in an attempt to come back to the U.S. along with President Obama in the wake of his historical Cuba trip. You’d think most social media users know about The Onion, but in true Internet fashion, that apparently isn’t the case. According to the urban legend and hoax debunking website Snopes.com, not everyone got the joke. Thanks to an influx of emails from confused readers, the site was forced to run a post labeling the claim as “False.” From Snopes:Social media users have often unwittingly shared fake news articles published by web sites that exist solely to traffic in outlandish false stories, but The Onion began in the pre-Internet days as a printed humor publication and evolved to become the premier online satirical web site (i.e., a site that aims to make readers laugh, not to be fooled). The Onion‘s item about Cuban refugees clinging to Air Force One consisted of a photograph and headline with no content, as did a previous (and similarly confusing) share from the site holding that SeaWorld houses orcas in large plastic bags while cleaning their tanks. A previous Onion article about a SeaWorld show that was “Just Elephant Drowning in Large Tank of Water with No Explanation” prompted a number of social media users to object to the imaginary described practice, as did another item about a teen whose parents intended to euthanize her because she was only “capable of texting and rolling her eyes.”

And then I see a story like this. A story where the internet thought that hundreds of Cubans rode the wings of an airplane – the President’s airplane – from Cuba to America, and I realize I’m safe and sound. I realize I have absolutely nothing to worry about. The internet is so stupid and so special I will be able to do this until I die. Over the years we’ve seen a million fake stories, videos and pictures go viral but I think this one is way up at the top of the list. Cubans dangling from the President’s airplane like Indians on a locomotive, flying tens of thousands of feet in the air. With so many people believing it was true, Snopes had to write an article about it! Snopes! The same place that writes articles like “False: There was never a man with a hook for a hand murdering people that flashed him to alert him that his headlights were off.” I bet the people at Snopes – who have seen it all – were like “You gotta be fucking kidding me.”