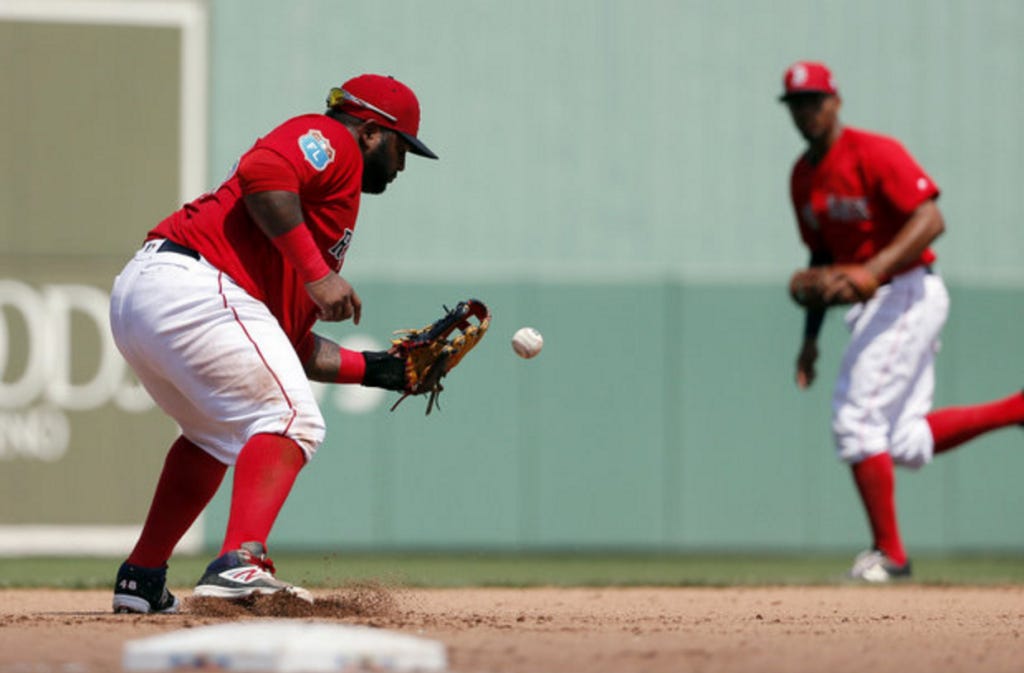 If you believe the words of Red Sox manager John Farrell, there’s a competition going on at third base between Travis Shaw and Pablo Sandoval.

Red Sox general manager Mike Hazen was on MLB Network yesterday, and he said that he’s staying out of it, and the decision of who will play at third base is ultimately up to Farrell. Now, there are a ton of factors in play here. First and foremost, Farrell is managing for his job right now. If the Red Sox struggle out of the gate, the good will that Farrell built up during the 2013 World Series is gone, and then he will be, too. So, if you’re managing for your job, and playing to win right now, isn’t the choice obvious? Well, yes and no.

Sandoval injured his back after diving for a ball the other day. Farrell said that Sandoval is day-to-day with the injury, but guess who else was day-to-day with their injury originally? Eduardo Rodriguez. And now we’re going to start the season with the lefty on the disabled list. Things change. Should the Red Sox take a similar approach with Sandoval? With this back injury, the Red Sox could attempt to avoid any controversy in “benching” Sandoval by simply saying that he’s hurt, so we’re going with Shaw for now. If they don’t want to just come out and say that Shaw won the spring training competition, which he did by a large margin, and that they’re embarrassed to admit their mistake in signing Sandoval in the first place, which I’m sure they have to be, then you now have an out. You have an injury. You can milk that injury.

Not so fast, though. If you bench Sandoval, he essentially becomes useless. You’re paying this guy $17 million in 2016, so wouldn’t you want to at least try to get something out of him? I suppose his value couldn’t get any lower than it is right now, but you’ve got to at least give him a shot to increase his value, and then hope that some sucker team in need of a third baseman wants to roll the dice on him if the Red Sox eat a sizable portion of his salary. Plus, if he’s sitting on the bench, I’m sure that’ll do wonders for his cardio.

But that’s Farrell’s dilemma. It’s almost like it’s a lose/lose situation for him. I’m sure the owners would love to see a return on their $95 million investment, but appeasing the owners by having Sandoval out there is essentially risking his job, because Shaw clearly is the better player at this point. If you start Shaw at third, then you’re making the decision that’s best for the team that day. If you start Sandoval at third, then you’re making the decision that’s probably going to make the owners happy. You know, the people who have the power to fire you.

So what’s the solution here? I think it’s pretty simple. We have no idea what Rusney Castillo is at this point in his career, and I don’t think anybody would even notice if he wasn’t out there in left field to start the year. You start Sandoval at third base, and you give him the chance to either prove that he belongs there, or prove that he belongs on the bench. Then you put Shaw in left field, because he already has proven himself. If Sandoval succeeds at third base, then the Red Sox are better off because of it. If he fails like he failed in 2015, then you can justify the decision to start Shaw over him to the owners, who have the unfortunate responsibility of paying him the remainder of his $95 million contract regardless.

As of right now, the Red Sox are a better team when Shaw’s bat is in the lineup, and his defense is at third base. But at the same time, the Red Sox would be even better if they were able to have Shaw somewhere in the lineup, AND if Sandoval were the player that the Red Sox thought that they were getting when they signed him. He can’t become that player again if he’s sitting on the bench.