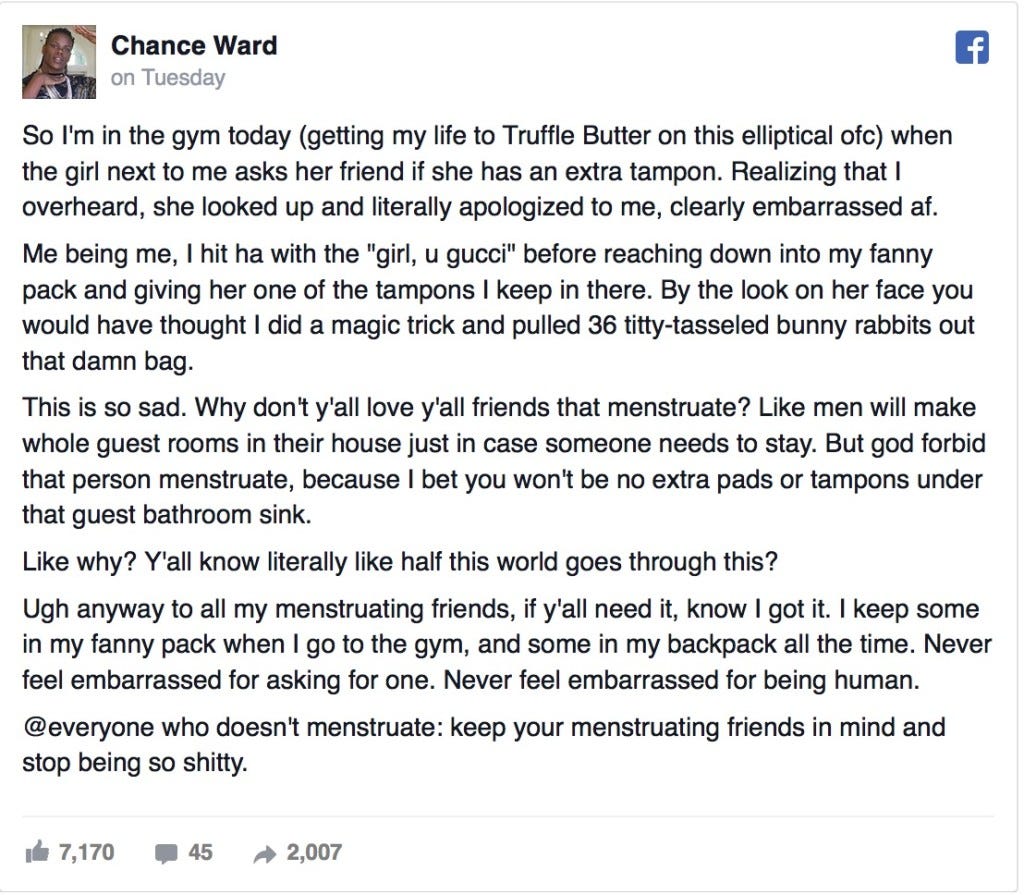 Mic – A fanny pack-wielding college student in California has a bold message for menstruating humans dealing with period shame: Not on my watch!

Chance Ward wrote a Facebook note this week detailing a recent gym experience in which a fellow elliptical rider seemed “embarrassed af” after he overheard her ask a friend for a tampon. Luckily, Ward was prepared.

The fact that “period shaming” is a thing that is a term doesn’t surprise me at all in 2016 but holy shit can I not stand that this is going viral on a lot of those super progressive “feel-good” sites. Don’t get me wrong, I’m not necessarily the type who’d kick a girl out because she’s on the rag (though the threat of bears is very real) but I can’t imagine what it takes to think like that. There’s this whole “woke man” movement that chicks are pushing lately, guys who either fully embrace or have been brow beaten by feminist types where they start parroting back the same ideals, either a beta guy or a Stockholm Syndrome thing basically. But like…when it’s raining out, do I expect someone else to have an umbrella for me? No. Because I am an adult and know that I should check the weather before going outside (Note: I never actually do this and do not own an umbrella currently). Same thing applies here. The only excuse to be this into people’s periods is if you’re a big Red Wings guy and who am I to judge if you’re going that extra mile to make fetishes that resemble a disgusting strawberry pie eating contest happen. Follow your dreams.

Also since I know the world has demanded it, my stance on period sex: If it’s one of the first times hooking up and it’s the only option to get that going, you suck it up. But otherwise, just wait until it passes and save your comforter some self-esteem issues. The analogy to me is if I haven’t been to Disney World before, maybe I wouldn’t mind that the seas of It’s A Small World run red with the blood of the infidels from Holland. But if I have been to Disney World before and had a good time, I’d much rather reschedule the trip until a day when the park is fully operational. In return, I don’t expect girls to want to fuck me when I have a hot and sweaty flu dick that resembles chewed up Laffy Taffy. See? Equality works in many ways.