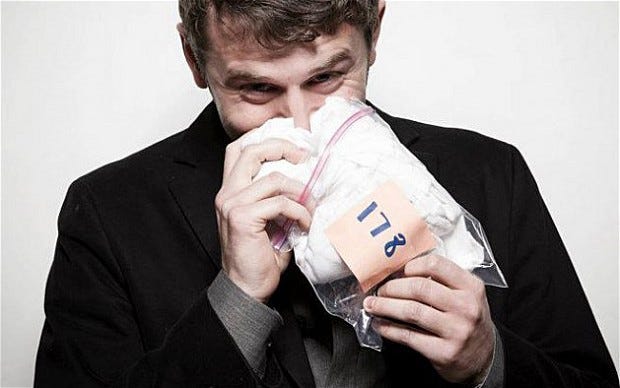 Reuters- Love at first whiff is the idea behind Smell Dating, a New York matchmaking service that promises to help single people sniff out their perfect match by breathing in the odors from dirty T-shirts. Artist Tega Brain, who teaches at New York’s School for Poetic Computation, and Sam Lavigne, an editor and researcher at New York University, created Smell Dating, which they describe as an art project.

Each of its first 100 clients received a T-shirt to wear for three days straight without bathing. The clients then mailed the T-shirts back to Brain and Lavigne’s “Sweat Shop” at NYU, where they were cut into swatches. Smell Dating then sent batches of 10 mixed swatches back to the clients to sniff this week. A match will be made if one client likes the scent of another and the olfactory attraction is mutual. In other words, if “Client 55″ likes “Client 69″ and vice versa, put a heart around it, Brain said.

The idea is based on the science of pheromones, the chemical signals that creatures from gerbils to giraffes send out to entice mates. Clients, who pay a one-time fee of $25, dive in nose-first, unaware of a potential smell-mate’s age, gender or sexual orientation. “Most normal dating services, you rely on profile pictures, assumptions that come from visual information,” Brain said. “You either really like the smell of someone or you don’t. It’s much more innate.”

Today has to be Great Monday for perverts, no? Because make no mistake about it, Smell Dating is Jesus being born, dying, and resurrecting all in one for all the sick sons of bitches that like smelling other peoples’ clothes, especially when they are ripe after three fucking days. Three days of no showering and not knowing the person’s a/s/l or sexual orientation basically just makes this a legal way to exchange your dirty clothes with other creeps, right? There is no matchmaking or love being found in that. It’s pretty much just getting a mystery pen pal that you send clothes to. And if you haven’t showered for three days, you have basically stopped trying to be a normal human. I can live with one day, mayyyybe two if you are a lazy blogger. But three days is when that homeless smell probably starts to grow on you.

The only thing I will say about this potentially being accurate is you can weed out any girl that doesn’t smell pretty. Because even if she is a straight up dime, if a girl doesn’t smell like a girl, I just don’t think you can bring her home to mom and dad. And while I know that girls load up on fragrances, soaps, and a bunch of other tricks, my dumb guy brain will forever think that they just naturally smell good and never poop.

By the way, I see you and your subliminal advertising Brian. #nice #staywoke