Ok first of all, in an unprecedented move, I’m going to reverse course on my Grayson Allen stance from last night. I know, if there’s one thing I’ve learned from the political world you’re never ever supposed to change your opinion. But after sleeping on it I no longer think Grayson Allen is a tough guy for avoiding the handshake with Dillon Brooks. As a fellow competitor who’s out here grinding every day in the blog world I can appreciate the emotions right there.

To be clear I still don’t have a problem with Brooks’ shot, just saying I can understand Grayson not wanting to hug the guy who just beat him down and rubbed his face in dog shit.

This move by Coach K? 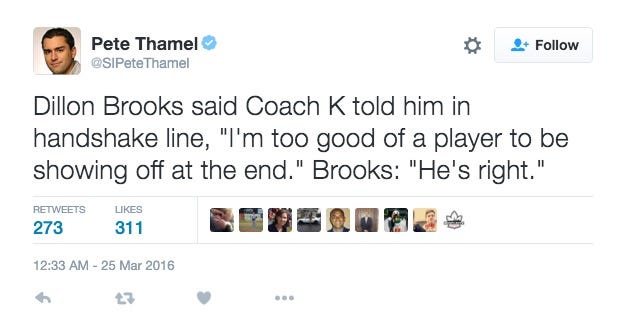 “He just told me that I’m too good of a player to be showing off at the end,” Brooks said. “And you know, he’s right. I gotta respect Duke. I’ve gotta respect them. And you’ve gotta learn from these things. He’s one of the greatest coaches.” [Fox]

Legitimately groaned reading that. 20 year old kid who just won the biggest game of his life and you pull him aside to lecture him about sportsmanship in the handshake line. So lame. Plus you know a little something about 20 year olds getting caught up in the heat of the moment right?

And I think I may be the only blogger/non Duke alum in the world who doesn’t hate Coach K, I mean when you have 1043 wins and 5 national titles you kind of know a little something about the game. Just pick a better place to be sanctimonious than the freaking handshake line after you just got slaughtered.

“I didn’t say that,” Krzyzewski said after the game. “You can say whatever you want. Dillon Brooks is a hell of a player. I said, ‘You’re a terrific player.’ And you can take whatever he said and then go with it, all right?” [ESPN]

You can do some lip reading and form your own opinion on this one. You can pretty clearly see him say “too good a player” and then see Brooks apologizing. Not sure why he’d be sorry about being a terrific player.