Welcome back to Rico Bosco’s “Bosco’s Bets”, presented by my friends at OddsShark.com . The best place for odds and trends on the internet.

Big weekend ahead … let’s dive right into it.

– I don’t vote but for those of you who do, here’s the current Presidential race odds

Call me crazy, but I’m holding out on wagering until my man Jed Bartlet runs.

– The NBA has it’s usual Friday night slate of games. Full list is here, but as always  the main game on the docket involves Golden State and their pursuit of the NBA’s best record. Tonight they lay 14 points to Dallas. For each NBA game, OddsShark.com lists trends like the one below, feel free to click into an match up to expand the trends for each team. 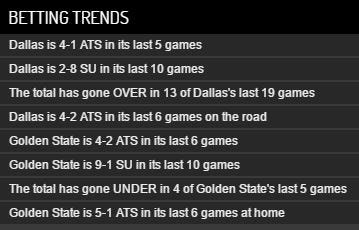 -For you future guys, Stephen Campbell listed out the current odds of NBA Finals matchups. Being that the Cavs are in such disarray, my value play here would be to toss the Cavs and take a stab with Raptors vs Warriors for + 1065, and Boston vs Golden State vs +4850. Again, those aren’t necessarily the match ups I would say will occur, but with the odds listed it’s worth a shot. Also you get to root against Lebron and who doesn’t love that ?

-The most enjoyable four days of golf are right around the corner, and below are the current odds via BetOnline.com , as provided by OddsShark.com. 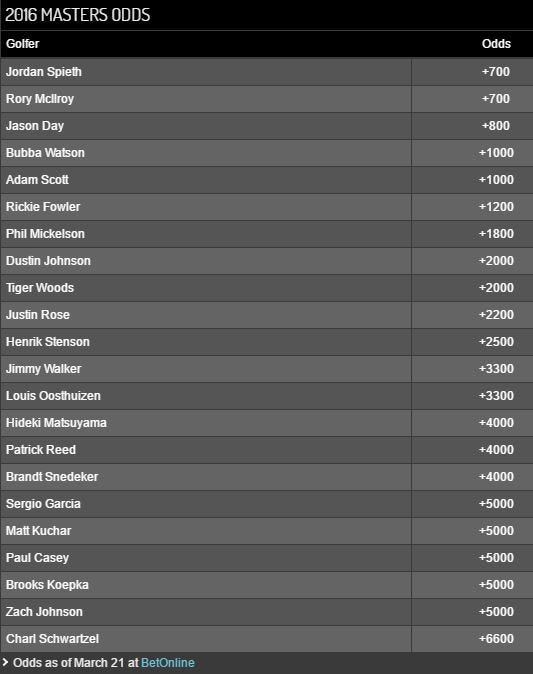 Pencil me in for Rickie Fowler +1200 on a knee jerk reaction here. He’s very long off the tee which should help him be able to attack the green on a good amount of his second shots, which should lead to him looking for birdies. If he putts the ball well, he should be in a great spot. I’ll take the odds here with a guy who seems to always be in the mix.

– “Chicks dig the longball” – Espn. (Hey Jamie O’Grady if you’re reading this they said it not us, so watch your mouth before you attack our company…again. You squid.)

OddsShark.com has you covered on future props for the season home run leader. Here they are.

-Quick Rico note…one of my favorite pools is the Under 120 Home Run Pool. Pick 10 players for the season, looking for the most home runs hit. The catch is all the player’s on your team’s total homers CANNOT exceed 120 total from the year before. (Ex – If Prince Fielder, Mike Trout and Todd Frazier all hit 41 home runs in 2015, you couldn’t pick all three in 2016)

– Just three games slated tonight. Listed here. Be aware of Vancouver as 70% of public money is on them.

– Here’s the current lines for tonight’s game. Below are the trends : 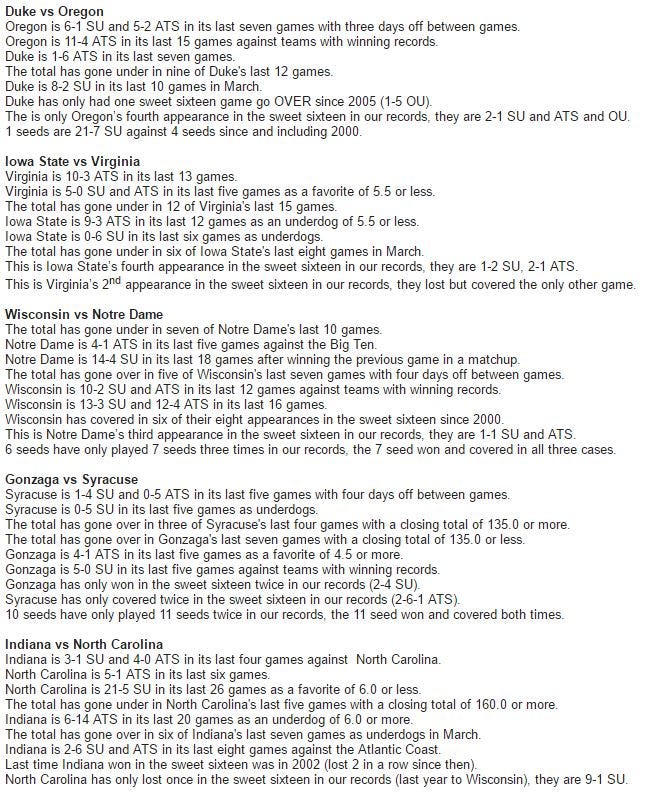 Not overly in love with the slate tonight, but this total jumped out. I don’t fully follow how a game of this magnitude involving two top tier defenses is this high. Looking at the numbers, Carolina wants to pus the pace as their tempo ranks 57th via Kenpom.com, but Indiana can counter that as they rank 152nd.  UNC has a very good offense (5th), and it never struggles to score; however against formidable defenses it hasn’t put up an sort of eye-popping 90 or 100 point games that would make be terrified of this over. For example, in recent games vs Virginia (5th D) they scored 61 points,  Pitt (60th D) 88 points, Syracuse (21st D) 75 points, and Virginia again 79 points. Now, let’s talk about UNC’s 12th rated defense. The Tar Heels haven’t given up 75 points since Saturday February 6th vs Notre Dame, and just 6 times all season (three of which were before Christmas). Berry and Paige will get in you, and Johnson and Jackson will contest shots. They cover a lot of ground ,and seem to be taking pride in locking guys up and throwing away the key.

It’s worth noting Indiana is no slouch defensively either. They just limited #1 offense Kentucky to 67 points, held 25th offense Maryland to 62 points, held Purdue to 73 and Michigan to 72. They have given up 80 points two times all season !

Are there a lot of scorers in this game ? Like Ferrell , Bryant and Johnson ? Yes…but there’s also a ton of defenders, and in a game this big. I like both coaches to stress valuing the basketball, and getting good shots, in addition to playing very hard defense to keep this game under.

– Saw my boy Hank is in NYC. Hope he hits up Corner Bistro for the best burger in NYC.

On a more serious note, I would ask that today at 4pm you root on The SUNY Geneseo Ice Knights in the Division 3 Frozen Four. If  you’ve read me cover them earlier this year, you know the story. The NY Times  just ran another piece talking about just how far this team has come this season. Regardless of the outcome today , these kids should be admired for how they’ve honored their teammate. It’s one of the best stories in sports, and speaks volumes about their character, their heart, and most importantly their friendship. Go Knights …

Have a great weekend and  Happy Easter !