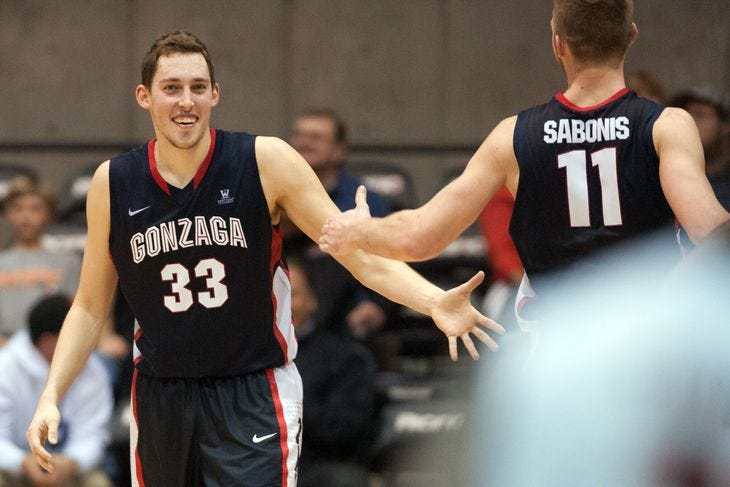 After last Sunday expectations were high last night for the games and frankly, they weren’t close. Maryland/Kansas was great for a half, Oregon/Duke was up and down for the most part, but Oregon was always in control. Villanova dominated Miami and Oklahoma blew out Texas A&M. So, it was all chalk.

Tonight, we have the four surprise teams playing in Gonzaga, Syracuse, Notre dame and Wisconsin and what should be the most entertaining game of the round in Indiana/UNC. With the South and West regions set for their finals we have the Midwest and East.

There’s no doubt this is the gam everyone is looking forward to this year. UNC is one of the top-2 teams in the country while Indiana won the Big 10 regular season and was underseeded as a No. 5 seed. The biggest thing to watch in this game is what team takes advantage of their mismatch – whether it’s Carolina’s frontcourt or Indiana’s backcourt.

North Carolina is starting to look the part that many people thought they were in the beginning of the season. The emergence of Brice Johnson as a top-10 player in the country has completely changed the way they play. No longer is Roy Williams relying on Marcus Paige to go win games, he can use balance, playing through Johnson. That will have to happen again tonight with Johnson having an advantage against an OG Anunoby/Colin Hartman/Thomas Bryant. While everyone is talking about how UNC needs Paige to play better, it’s more on Joel Berry, who is the better of the two players now. Whatever Paige and Justin Jackson gives them now is just an added bonus. However, Joel Berry is the second leading scorer on the team and will have to go up against Yogi Ferrell that needs to have the big game from Carolina’s backcourt.

I swear Indiana plays 15 guys a game. The improvement of Anunoby, Juwan Morgan, Robert Johnson and play of Nick Zeisloft and Colin Hartman gives Tom Crean a deep bench to play with and battle foul trouble. The key – much like the Kentucky game – is to keep Bryant out of foul trouble. Thomas Bryant is going to have to be a dominant big guy like he was last game, but on top of that guys like Troy Williams, Anunoby and Hartman have to keep Carolina off the glass. The question for Indiana is what Troy Williams shows up? He’s one of those guys that can drop 20 and 5 rebounds or go 2-for-14 and pick up 4 fouls.

Storyline You’ll Hear Too Much About: The 1981 National Title Game played between the two teams in Philly.

Matchup to Watch: Justin Jackson vs Troy Williams – Both of these guys look like stars one day and then look like complete bums the next. If one of these two have a big game, that’s going to be a win for their respective teams. One of them needs to do that so it’s not just a wash.

Neither of these teams are supposed to be here, which should make this game even more entertaining. We have two different styles of play, as Wisconsin is back to the extreme slow, swing offense while Notre Dame plays minimal defense and wants to run up and down the court.

Notre Dame has the ultimate inside-outside game in Demetrius Jackson and Zach Auguste. Jackson is a top-10 point guard while Auguste has turned into a constant double-double guy. Surrounding them are a bunch of guys that can shoot the hell out of the ball and Steve Vasturia, who is the one guy on the team who can defend.

Wisconsin has benefited from the development of Ethan Happ and Vitto Brown, which has made up for the struggles of Nigel Hayes. Hayes is supposed to be the best player on Wisconsin yet he’s 5-for-27 from the NCAA Tournament. Ethan Happ is a big guy that led the Big 10 in steals at 6’9” while averaging 12.4 PPG and 7.8 RPG. Vitto Brown has the ability to stretch the floor at 6’8” and is shooting over 40 percent from deep. Wisconsin will look to run their swing offense, back to the days pre-Dekker and Kaminsky, which will keep Notre Dame working defensively for a large majority of the clock.

Storyline You’ll Hear Too Much About: Did you know Bronson Koenig hit a game-winner?

Matchup to Watch: Zach Auguste vs Ethan Happ – We talked about it already, but Happ is one of the better defenders in the Big 10, while Auguste is averaging 14.3 PPG. Happ needs to keep Auguste off the boards – averaging 11 a game – while also trying to take advantage of him on the offensive side of the ball.

Bench Advantage: Both these benches suck, but Wisconsin I guess?

Much like Notre Dame/Wisconsin, this game features two drastic styles of play, but better teams. Virginia ranks as the No. 5 defensive team in the country while Iowa State is the third best offense. The difference though is the Cavaliers are efficient offensively, just at a very slow pace. The key as always for Virginia is keeping Malcolm Brogdon on the floor. He’s probably the best two-way player in the country and offensively he can beat you in a variety of ways. He’s strong enough to take people into the post and has a drop step and baby hook over his shoulder to score there. He’s a great shooter and has shown he can take people off the bounce. Look for him to have another big game tonight. The question on Virginia’s offensive side is who steps up to be the second player. Anthony Gil and London Perrantes should be those guys but Perrantes will defer too much sometimes while Gil can’t get his own bucket. Perrantes has to be that guy today going against Monte Morris.

Iowa State will play through Georges Niang, a 6’8” forward that plays like a point forward and can stretch the floor. He’s likely too big for Malcolm Brogdon to guard, so that means Anthony Gil will have to defend him with Iowa State trying to bring him away from the basket. The way we saw teams beat Virginia this year is two different ways. The first is good passing big guys, Virginia likes to double the post with both bigs and if you can stretch the floor with your four and have a strong passing big guy, that will cause troubles. The other way is having a dominant guard. Iowa State has that with Niang and Monte Morris, but I don’t know how much I trust Jameel McKay handling the trap and passing out of it.

Storyline You’ll Hear too Much About: Former Iowa State head coach Fred Hoiberg is the head coach of the Chicago Bulls, where the game is being played.

Matchup to Watch: Georges Niang vs Anthony Gil – Gil is a great defender, but I question how much of that is a product of the system vs being a 1v1 defender. Niang will try to attack that, getting the ball out on the wing and looking to beat Gil off the dribble. If Gil can stay out of foul trouble, Virginia will be sitting pretty.

And now we have the one game that gives us a double digit seed in the Elite Eight no matter what happens. Both were true bubble teams with Gonzaga winning the WCC while Syracuse surprisingly was given a No. 10 seed. For Syracuse it’s all about if Trevor Cooney is shooting the ball. Cooney needs to shoot the ball well, which takes some pressure off Mike Gbinije. The other player to watch is Tyler Lydon, a 6’8” guy that can stretch the floor and is a strong rebounder as well.

Gonzaga needs Kyle Wiltjer to have a big game. He’s unique in the sense that he obviously has size at 6’10” and can shoot anywhere in the gym. Against the 2-3 zone, it’s going to be up to Wiltjer to break it. Whether he’s on the wing or if Gonzaga puts him in the high post to try and shoot/pass over the zone it’s going to be on him to open up the floor. If he’s shooting well early, the zone will press up, leaving the post open for Domantas Sabonis – a lottery pick big guy that can finish from anywhere inside 15 feet.

Storyline You’ll Hear too Much About: Kyle Wiltjer knows what it takes to win because he won a title with Kentucky

Matchup to Watch: Kyle Wiltjer vs Syracuse’s zone: see above. His play will determine the outcome of the game no matter what.

Coaching Advantage: Does Boeheim have the legacy? Yes. But, he’s not the same coach he was as before. Give me Few here.