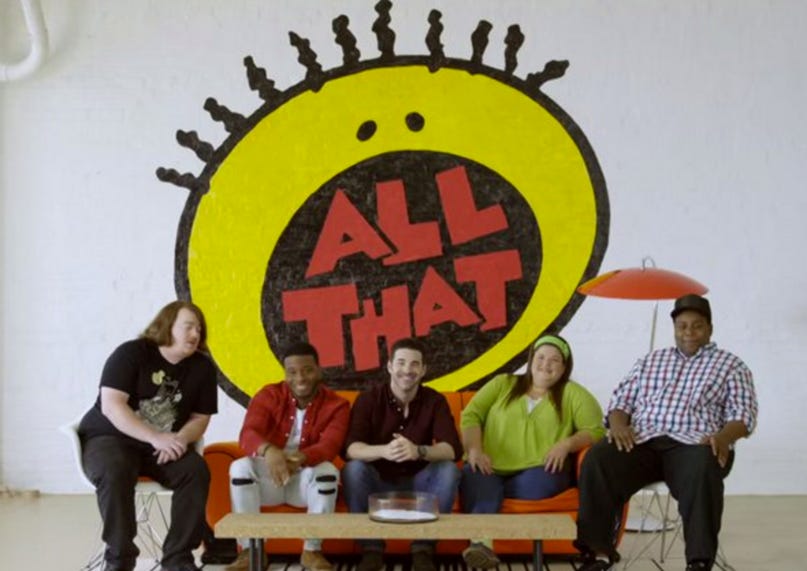 Source – Nickelodeon is waxing some serious nostalgia with some of its upcoming projects. In recent months, the children’s network has green-lit a Hey Arnold! movie, a Legends of the Hidden Temple movie, and a crossover film bringing together Doug, Rugrats, Ahh! Real Monsters, and Ren & Stimpy. Now, the nostalgia train chugs along with a reunion for which every ’90s Nick fan has been waiting: All That.

To celebrate the show’s 22nd anniversary, All That cast members Danny Tamberelli, Kel Mitchell, Josh Server, Lori Beth Denberg, and Kenan Thompson have reunited to film new, original segments together. The one-to-three minute sketches will air during an All That marathon this April. The group will also share backstage secrets and stories.

In case you forgot, Nickelodeon launched a new channel called “The Splat” does nothing but air your favorite shows from your childhood.  We’re talking some of the all time greats here like Rugrats, Hey Arnold, Doug, Ahh! Real Monsters and Rocket Power. Now I still haven’t quite figured out which channel number to put in to watch The Splat, but it looks like I only have about a month left to figure out. Because the All That marathon they’re airing on April 16th and 17th is going to be a must-watch for anybody like myself  who would like a chance to formally say a final goodbye to their childhood.

Sidenote: kinda crazy that Kenan is the only All That member who still has a career going right now. Amanda Bynes has officially turned into a crazy person. We saw Kel Mitchell a few weeks ago at the Charlotte Hornets Nickelodeon Night but other than that, he’s more known for just having fake death rumors started about him every year. I couldn’t tell you what Danny Tamberelli and Lori Beth Denberg have been up to over the past 14 years but from the photo above I just have to assume it’s been a lot of bad life decisions. And I feel like “All That” was all Josh Server had. As soon as that was over, so was he. So good for Kenan. He’s been with SNL for 13 years which is crazy. Graduated from the Kid’s Bop version, had Kenan & Kel going for a little, made one of the best movies of all time in Good Burger, dabbled around with the Mighty Ducks for a while, moved on up to the big leagues and hasn’t looked back yet.