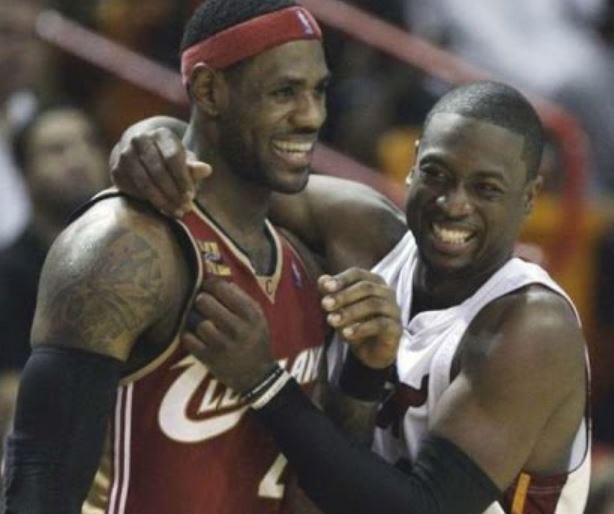 CLEVELAND, Ohio – The Cavaliers have noticed LeBron James’ occasionally peculiar behavior of late and have addressed it with their star. Two members of the team’s top brass – coach Tyronn Lue and general manager David Griffin – have had conversations with James over the past few days regarding separate items. Lue spoke with James after Saturday’s 122-101 loss in Miami, during which at halftime James was noticeably chatting it up with his friend, Heat star Dwyane Wade, instead of warming up with the Cavs trailing by 21. “I just told him we can’t have that, being down like we were and him being the leader,” Lue told cleveland.com. “Just me being a competitor, I didn’t like it. We had a long talk about it. It was good. He understood, he apologized, and he’s been great.”

Griffin’s talk with James on Wednesday afternoon was a little more general, but was sparked by James’ comments to The Bleacher Report that he wanted to play with Carmelo Anthony, Dwyane Wade, and Chris Paul on the same team for a “year or two.”

This has really been a couple great weeks for Lebron haters like myself. It’s literally one vintage Lebron story after another. First he unfollowed the Cavs on twitter. Then he said he is going dark on social media.  Then he promptly said he is going to join Snapchat.  Next it was him saying he’d take a paycut and dump the Cavs to play with his friends.  Today we get the vine of him eating a banana and pretending like the media attacks him unfairly. It’s one great Bron Bron moment after another. Now this story. We hear that the Cavs brass have to keep telling him to screw his head on straight. That it’s not okay to giggle and do the lambada with Dwayne Wade at half court when you’re getting your teeth kicked in. You think Jordan or Bird ever had to be told that? Think anybody with any competitive spirit has ever had to be told that?  This guy is the worst human and worst leader in the history of sports. And he’s also apparently the worst joke maker of all time too. Although to his credit this joke was so bad it was good.