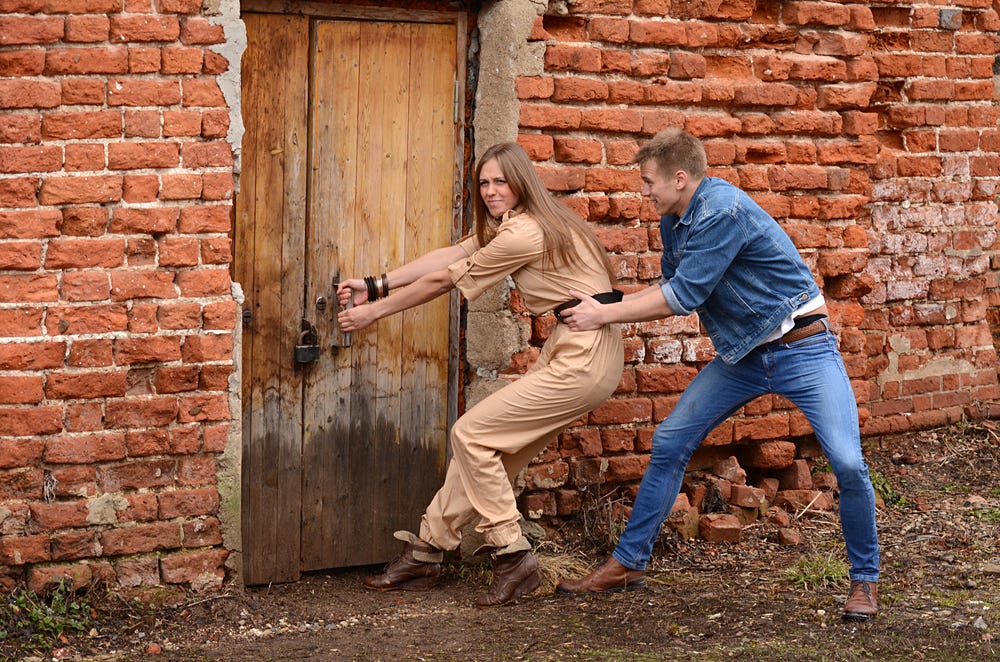 I capitulated, averted my path over to his doors, smiled and said thank you. Then, as we approached the second set of doors into the lobby, he yelled out, “I’ll get those, too.” He wanted to do it. So I waited for him to catch up. And then out of obligation I thanked him again, but I was annoyed.

I thought of the men on Reddit who call women cunts because some ladies don’t want the door opened for them. Every time I read the men’s wounded lash-outs, I sadly laugh at how they think the thing is the thing. The door isn’t the thing. For me, the incident this morning was a bang-on metaphor for my experiences as a woman. The millions of small ways that I’ve been forced to surrender to men, who made me move or change or come to them because they felt like it. The ways that I’ve had to change my path in magnitudes great and small.

I cannot tell a man about the endless parade of minor indecencies, artful put-downs, implicit shushes, subtle dismissals, or friendly coercions under the cover of niceness. Without the experiences to go with it, he simply cannot understand what it’s like to be a woman.

They think I’m trying to tell them that I don’t like doors opened for me. I won’t ever be able to explain it.

I remember when I was in a high school English class and we were talking about symbolism in poetry and our teacher who had a PhD in poetry and literature told a story she’d heard about (I believe) Robert Frost. Basically, Frost one day went into a college unbeknownst to the teacher or the students and sat in the back of a lecture hall and listened to them break down one of his works. They talked about every minute detail but the class really focused in on a tree he referenced in the poem and started harping on it incessantly. To them, the tree was his youth withering away, his relationship with his father, change, all these things where they inferred meaning in the same way English classes do, breaking it down and putting all this extra meaning where there really wasn’t any. After however many minutes of this going on, Frost had heard enough. He collected his things, got up, and shouted to the classroom “IT’S JUST A FUCKING TREE” and stormed out.

And that’s what this girl’s complaint about a man opening a door is. Are there a lot of things guys do that are kinda sexist? Sure. But sometimes you’re just holding a fucking door. It’s not an oppressive symptom of a male-dominated society. It’s being decent. My mom taught me to always hold doors and say please and thank you and, since I’m not a piece of shit, I’ll usually hold a door open for a woman or a man behind me because I think it’s generally poor form to let an object potentially smash in someone’s face. That’s just me. Is a perfect world for this woman having everyone treat each other like shit or like other people don’t even exist? Where everyone keeps their heads down and worries only about themselves out of fear of offending someone over something this completely banal? It’s such a joke at this point and things like this are actively going to make the future worse for all of us.

Anyway here’s a solution for this chick so she doesn’t have to get this door anxiety any more. Hopefully me trying to help won’t be taken as a sign of some more oppressive patriarchy:

(Man who really doesn’t want that woman to open a door for herself photo by Shutterstock, h/t @mentalitymag)