Wow, what a remarkable turn of events for Ben Simmons. I mean name another way to more perfectly solidify your heel turn? Announce you’re signing with Lebron’s agency on Bleacher Report’s video platform. That’s like straight out of the dictionary. Also make sure to do it a couple weeks after you A) didn’t qualify for the Wooden Award because of your 1.9ish GPA that you got from not going to any classes and B) lost an SEC playoff game in one of the most embarrassing displays of basketball ever put on the hardwood while having more than double the amount of turnovers to made shots at halftime and C) declining an invitation to the NIT because it would be harmful to your brand.

In fact I think I kind of like it? Or at least respect it? I mean I don’t give a fuck if he went to class. Blame the NCAA and the NBA for this sham one year of college rule. And I love the way he responded to the media about it too. Basically – who cares? Then that A&M game where they lost by 40 and ESPN was still slobbering all over his pointless double-double was the last straw for everyone. So if you’re going to be hated by the majority of the people why not fully embrace it?

Good for Simmons. Learn how to come even remotely close to shooting a jump shot and he’ll be a beast in the NBA. 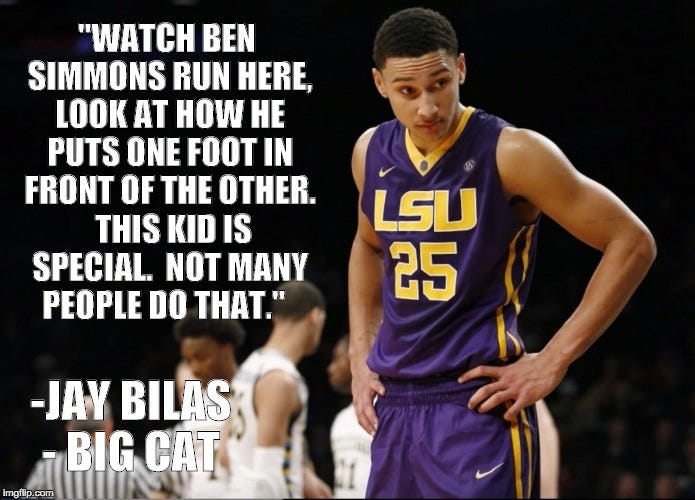