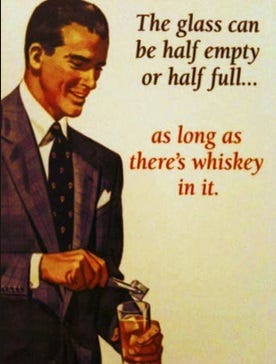 NBC – When it comes to adding a shot of alcohol to your cold or flu remedy, it’s hard not to wish those boozy concoctions are doing some good for your health. As it turns out, they are. Well, kinda. Drinks like hot toddies, which traditionally contain whiskey, lemon and honey, can actually give cold and flu patients relief from their symptoms, said Dr. William Schaffner, chair of preventive medicine at Vanderbilt University Medical Center in Nashville, Tenn. It just can’t prevent or cure a cold or flu virus. “It would not have an effect on the virus itself, but its effect on the body can possibly give you some modest symptom relief,” Schaffner said. “The alcohol dilates blood vessels a little bit, and that makes it easier for your mucus membranes to deal with the infection.”

I hope Dr. William Schaffner takes no health insurance cause he’s about to get a new patient, even though we’ve known this for eons. Whiskey makes any man feel like a champ on cloud 9 until around 2am when that cloud evaporates and you crash into the 7th level of drunken hell. I’m not too sure about this poof drink they call Hot Toddie. That name is perfect for a gay bar where ex-moguls can compare their pics of howitzers on the beach. But straight whiskey will kill anything in its path. You think the common cold is any match for my good friend Jack Daniels? Dave Attel said it best, when you drink Jack you don’t know where you’re going but you know when you get there you won’t be wearing any pants. AND you won’t need any tissues…until someone starts bleeding. Which tends to happen more often than not.

The next time you get the sniffles, be a man and pull a Tommy Gavin. 8 fingers of whiskey will cure anyone of what ales them. Except for Whiskey Dick, of course. The only remedy for that is time and maybe a sandwich.