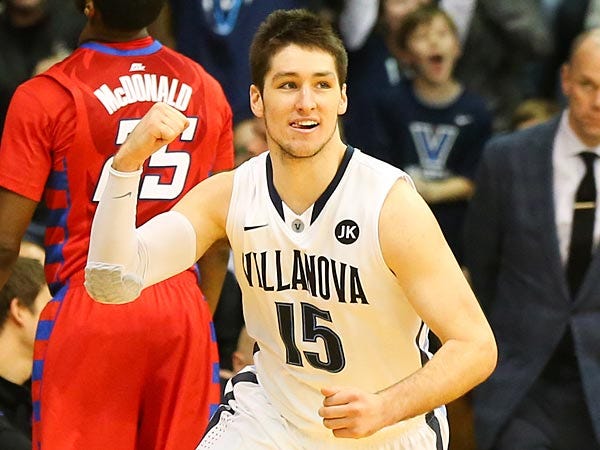 After the worst three days of the year in college basketball, we can finally get back to talking about games. The West and South regions are on tonight, giving us a lot of anticipated matchups. We’ll take a look at each game, breaking down the individual matchups and what to watch for from each team.

Five of the eight coaches in action tonight have made a Final Four, including a matchup of ones in the Miami/Villanova game. On top of that we get star action tonight in Buddy Hield, Brandon Ingram, Dillon Brooks and Grayson Allen, leading to must watch TV.

Before the season started you’d say both these teams deserved to be here. However, Maryland absolutely struggled this season, never really gelling together while also refusing to rebound and running a dreadful offense. However, the Terps are still extremely talented with NBA guys and a point guard that can give Kansas trouble. The Jayhawks do everything pretty good, except they do struggle in pick-and-roll situations. When Texas ran the high ball screen Isaiah Taylor was able to get to the rim until Kansas went under the screen, forcing him to shoot – which isn’t pretty. Well, you can’t do that against Melo Trimble. Expect to see a lot of high ball screens by Diamond Stone trying to force Kansas to decide whether they want to fight over the top, leaving the chance Trimble can drive or hit Stone on the roll or fight under, giving Trimble the opportunity to pull up off one dribble, something we’ve seen him do.

Kansas on the other hand should murder Maryland on the glass. The Terps give up offensive rebounds on 30 percent of possessions, while Kansas is the 84th best offensive rebounding team in the country. Yes, there will be a height disadvantage at the wing spots for Kansas, but I can’t see Robert Carter Jr, Diamond Stone and Damonte Dodd keeping Kansas off the boards all night. Look for Landen Lucas to use his size at 6’10”, 240 lbs to create space and keep possessions alive. Defensively, don’t be surprised to see Graham switch on Trimble if he gets off to a hot start. We saw Self put Graham on Hield during the Oklahoma games this year and defended him better than anyone we’ve seen all year. There will be another height advantage for Maryland if that’s the case, but you might want to keep the ball out of his hands if you’re Kansas.

Storyline You’ll Hear Too Much About: Mark Turgeon playing at Kansas and being on staff there.

Matchup to Watch: Wayne Selden vs Jake Layman – both these guys are expected to be in the NBA at some point and the way Kansas plays three guards means Layman will be on the Selden to start the game. Can Selden use his driving ability and quickness to get past Layman, causing Maryland to scramble defensively? On the opposite side of the ball, will Turgeon clear out Stone and Carter, letting Layman post up?

Villanova is here. Jay Wright finally feels like he can breathe after getting back to the second weekend for the first time since 2009 and to somewhat of a surprise Nova is favored in Vegas. They are extremely balanced, led by Josh Hart, but can beat you with Ryan Arcidiacono’s shooting or on defense. The play of Kris Jenkins has completely changed the narrative for Villanova as he stretches the floor. Over the last 10 games he’s hit 2 shots from deep in each one and had 15 points in nine of them. If Miami wants to go with a big lineup, it’s almost impossible to guard him and Josh Hart who play their three and four spots while being undersized.

On the other side, Miami is set up the same way from a balanced standpoint. They have four guys scoring over 10 a game, led by Sheldon McClellan and Angel Rodriguez. In fact Rodriguez has scored at least 24 in both of the NCAA Tournament games and is in a rhythm shooting the ball. Miami wants to outscore its opponents in a high scoring game, but has no problem getting down and defending like we saw against Wichita State. The biggest question for Miami is what Angel Rodriguez shows up? As good as he can be, he can shoot and play Miami right out of a game.

Storyline You’ll Hear Too Much About: Villanova making the Sweet 16

Matchup to Watch: Angel Rodriguez vs Ryan Arcidiacono – both guys make their teams go on the offensive side of the ball. If Rodriguez is scoring, can Arch slow him down or hit his own threes to keep Nova in the game?

Oregon is the team no one seems to know about and that’s probably because they play out west. However, they have a three-headed monster in Eligin Cook, Dillon Brooks and Tyler Dorsey that’s as good as anyone. As much as Brandon Ingram is a matchup nightmare for teams, Oregon’s Chris Boucher is 6’10” and can stretch the floor, meaning Duke can lose even more defense if Plumlee isn’t at the rim. With Plumlee away from the rim, look for Brooks, Cook and Dorsey to try to drive, especially Dorsey. Brooks can be bothered by Ingram’s length, but Dorsey is a 6’4” guard that can finish at the rim and shoots 41 percent from deep. I expect him and Boucher’s ability to stretch the floor to be key for Oregon here.

Same thing with Boucher is the question of how Oregon can defend Brandon Ingram. The likely candidate is Dillon Brooks, who is 6’7” and nowhere near as long as Ingram to try and bother his shot. Duke will look to run this game, trying to take advantage of their offense, especially if the defense continues to struggle. This game should be in the 80s and one of the more enjoyable ones to watch.

Storyline You’ll Hear Too Much About: Duke never winning a game in the Pacific timezone

Matchup to Watch: Luke Kennard vs Tyler Dorsey – both freshmen are electric scorers and can do it both inside and outside the arc. Can Dorsey can Kennard in foul trouble, making Duke to the short bench? On the flip side can Kennard get his 15-20 making him the third guy for Duke?

It’s simple really for Oklahoma. Can Buddy Hield carry this team to a Final Four? If he’s off can the backcourt of Isaiah Cousins and Jordan Woodward pick up the slack and get their own buckets? To me the answer is yes. Oklahoma can do it all, as they are one of the best defensive teams in the country as well and if Khadeem Latin stays out of foul trouble, there’s a rim protector to go along with Kruger’s switching defense from the 1-4 spots. Offensively, obviously they live by shooting the three, which usually spells disaster. However, this is one of the best shooting teams in the country, thanks to Ryan Spangler’s ability to step out and shoot.

Texas A&M has two guys in Jalen Jones and Danuel House that can take over a game. Hell, we saw what House did in the SEC title game and the last 2 minutes and overtime against UNI. The Aggies should use their size advantage here against Oklahoma, especially trying to get the ball to Tyler Davis in the post early. If not there look for Danuel House to use his size against Hield, trying to get him in foul trouble. Also, with the switching defense, don’t be surprised to see a lot of big on big screens, trying to free up Jones and House.

Storyline You’ll Hear Too Much About: Texas A&M’s comeback against UNI

Matchup to Watch: Isaiah Cousins vs Alex Caruso – Cousins is the second guy for Oklahoma. He’s averaging 13 a game and shooting over 43 percent from three. Caruso is a former SEC Defensive Player of the Year and will need to slow Cousins down to take away Oklahoma’s offense.

ICYMI: Former NBC Sports and Fox Sports writer Terrence Payne sat down with me to take a look at the Sweet 16 games and discuss Jamie Dixon leaving Pitt. We also talked about how the Big East is now looked at because of Villanova.