REAL weird video all around here and I watched every second of it to try to parse it all out. I started watching this expecting that Office Bologna Tits was going to be the thing that stuck out the most to me. When he started waving that Code of Conduct card around and pulled his cross out from under his shirt I was so locked in on the hate. But then the SEAL dude got pretty over dramatic with his whole “You can’t even preach THE GOSPEL” schtick and I wasn’t sure that I could feasibly defend him either. But then this chick sauntered in at 6:55 and destroyed all the hateability charts: 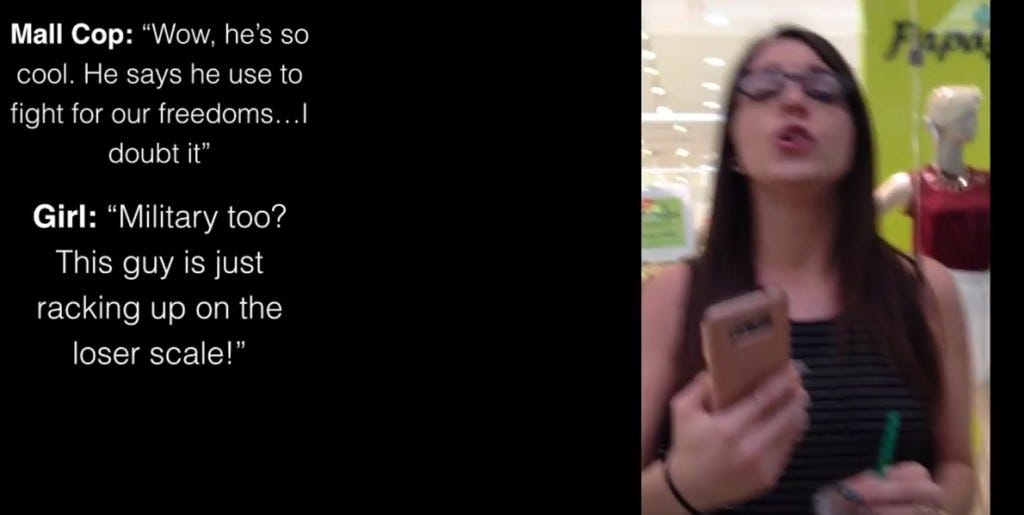 And then she launches into her super sheltered liberal “I just don’t believe in signing up to be a body bag or a robot” shit and UGH she was the fucking worst of it all. I don’t want to get into some religious debate and whether it’s right or wrong for this guy to try to talk to people about Jesus in a mall but this girl and Pudgy the Whale are just such fucking wieners. You work in a mall and you’re going to bash some dude who served our country because this is the one area in life you have any power and can take someone like him down a peg? So fucking loathsome.

Judge Spags’ ruling: Keep the SEAL dude out of the mall and let him spit hot gospel to people sitting outside and drop fatty and this bitch in the Middle East so they learn to appreciate the sacrifices people make so they can make their cunty remarks while doing their worthless minimum wage jobs. Also I rule Gawker has to pay $25 million in punitive damages. Case dismissed.