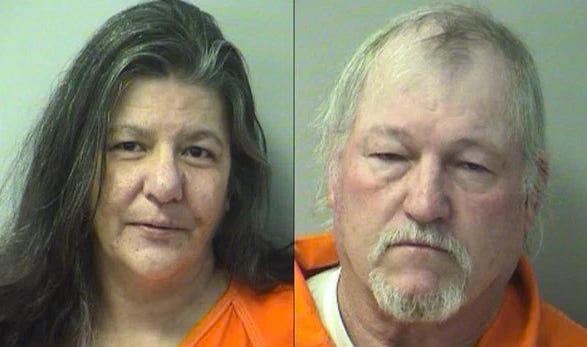 KXAN - A Florida couple was arrested Wednesday morning after police say the wife hit her husband with a burrito and the husband responded by stabbing his wife with a fork. It happened Tuesday morning in Crestview, Florida, according to the Okaloosa County Sheriff’s Office. Deputies say the 51-year-old Suzanne Hurlvert hit 66-year-old Carl Owen Smith in the back of the head with a half-eaten Burrito Supreme during an argument over his alcohol consumption. Smith then responded by stabbing Hurlvert in the hand with a fork he was using to eat a Taco Bell pizza and left the home. The fork was so deeply embedded, they had to be removed by doctors at a nearby hospital. When deputies arrived, Hurlvert was still there, relatively calm, but with a fork sticking out of her hand. Deputies noted portions of the burrito were found scattered around the room. Deputies later found Smith at an area bar. When deputies showed him a picture of his wife’s hand, he reportedly started laughing and said they have a lengthy history of domestic violence.

This is just the most perfect Florida couple story of all time. Alcoholic husband, his wife who is fed up with his shit, Taco Bell forks being stabbed into hands, and a history of domestic violence. The fact there was no mention of meth or bath salts in the story is the truly shocking part in all of this. Sure we shouldn’t laugh about domestic violence, but he did it first, and I’m sure she has a chuckle about it here and there. Because I truly believe these two, at the end of the day, are madly in love with each other. Can’t you picture them cuddled up on the couch together, laughing about that time she hit him upside the head with a burrito and he stabbed her with a fork? Little pieces of Mexican Pizza penetrating her skin, hilarious. There’s not two people who deserve each other more than these two fine folks. In a story which includes alcoholism, domestic violence, and wasted Taco Bell, somehow it’s not even that sad of a story. It’s more of a scene out of a Will Ferrell road trip movie than anything. Just the two wacky old people that Will and his crazy friends encounter along their journey.