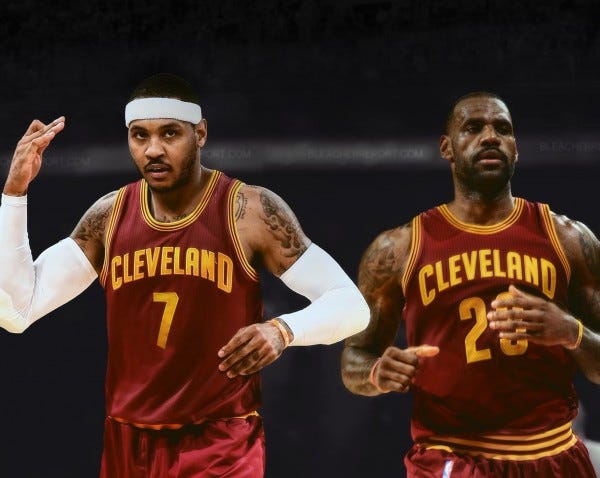 So Bleacher Report just did a piece on the friendship between LeBron and #Me7o, with the big quote from the story being:

“I really hope that, before our career is over, we can all play together,” James said. “At least one, maybe one or two seasons—me, Melo, D-Wade, CP—we can get a year in. I would actually take a pay cut to do that.” Maybe at the end of their careers, James said. Maybe sooner. One more ring chase, this time with everyone on board. “It would be pretty cool,” James said. “I’ve definitely had thoughts about it.” Before bounding away, he smiles and closes with a coy chirp: “We’ll see.””

Can someone please wake up The Zen Master from whatever bowl of soup he is napping in right now and tell him to spend the next three months putting together trade proposals that include both the Cavs and the Knicks? I don’t give a shit if you want the trades to involve the Clippers (Blake), the Celtics (picks), or any of the other NBA teams. It’s time to hit the reset button on the franchise and if GM LeBron would trade Andrew Wiggins for a decoy in Kevin Love, what would he give the Knicks for #Me7o? I mean I will happily funnel three iced coffees and just sit on the Trade Machine for hours to find something that works. The Cavs probably have the East locked up for at least the next season or so simply because LeBron is still a freak of nature. And there is no way LeBron enjoys watching Steph sit on his throne. So the Cavs have to go for it now, right? Let LeBron have his superteam, which will probably fall short of a championship like the 2004 Lakers and become Exhibit A of proof that God absolutely despises Cleveland.

And can you imagine LeBron and #StayMe7o going emo at the same time as teammates during losing streaks? Trying to one-up each other for who can tweet more like RG3 while the world looks to see which guy unfollows the other first? Knicks fans deserve this. Fans of unintentional comedy deserve this. People from Cleveland deserve this. Okay, that’s probably wrong. Nobody deserves the inevitable sadness this would create in Cleveland, but you know what I mean. If you live in Cleveland and/or root for a Cleveland team, you know what you are signing up for. Your misery entertains the rest of the world. Now will someone seriously go wake up Phil Jackson.

*And in the event that the 1/1000000000000 chance that LeBron signs with New York happens, I have set every negative tweet and blog I have ever written about him to self destruct the minute he announces that he is taking his talents to Gotham.