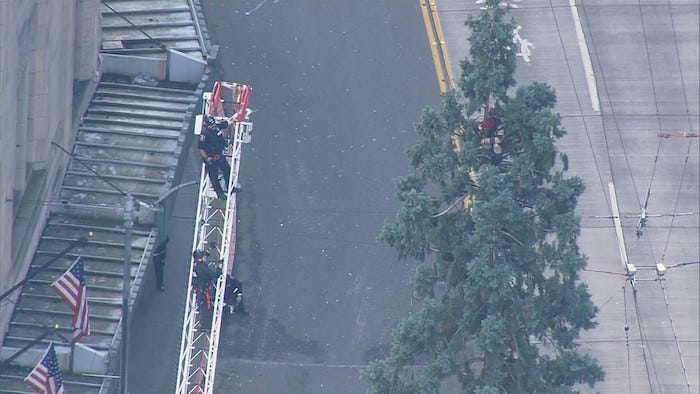 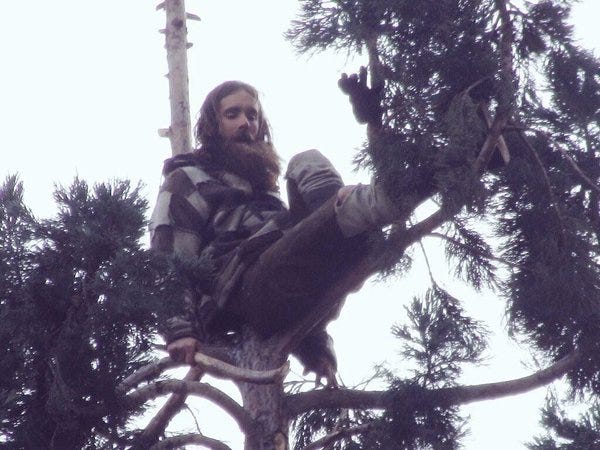 KOMO- Police and firefighters spent much of Tuesday trying to coax down a man who climbed to the top of Downtown Seattle’s iconic 80-foot-tall Sequoia tree and refused to come down. Crews brought a ladder truck to the scene, at the corner of Fourth Avenue and Stewart Street, after receiving reports of a man stuck in the upper branches of the tall tree, just after 11:30 a.m. The fire truck’s ladder was extended to within a few feet of the man, then negotiators climbed up and are trying to speak with him.

So far he has refused to come down and has thrown an apple at medics. The man, with a long beard and wool cap, was also seen tossing small branches, orange peels, pine cones and other materials at rescuers and claimed to be armed with a knife, Seattle Police said. He later requested a pack of Camel Crush cigarettes.

This guy is lucky he is in a crunchy place like Seattle. Because any normal state would have bulldozed that tree to the ground by now. Can you imagine if some hippie climbed to the top of the tree at Rockefeller Center? The NYPD would be shooting to kill before he even made it to the top. And the thing is this dude doesn’t even have a motive. Maybe he’s pissed off at the camel jockeys, maybe it’s the Hebes, Northern Ireland, it’s none of my business. Just another hippie doing hippie things in Seattle. But the craziest thing is that they are LIVE STREAMING this shit right now. Here are the highlights of it, which also doubles as basically the entire live stream. Some dirty son of a bitch just sleeping in a tree. You may not agree with Donald Trump on 99% of the stuff he says. But this is proof that America has slipped a little bit.

But if you are climbing trees after the age of 10, there are some serious red flags going off. Girls aren’t into dudes that climb like spider monkeys. Throwing fruit and pine cones at people is another strike. If you get hit by a pine cone, you can get sap all over you. And there is nothing worse than being covered in sap. That’s worth at least five years in the clink in my eyes. But having this guy’s only demand being Camel cigarettes is know he is complete loony toons. That’s crazier than when they asked for naked pictures of Bea Arthur in Airheads (criminally underrated movie, btw). The ultimate “look at me move” mixed in with being a Camel cigarettes guy makes this guy a complete menace to society.

Update:  He climbed down the tree unscathed and is being talked to by police.  A truly sad day for people that wanted to watch a man fall to his death on TV.