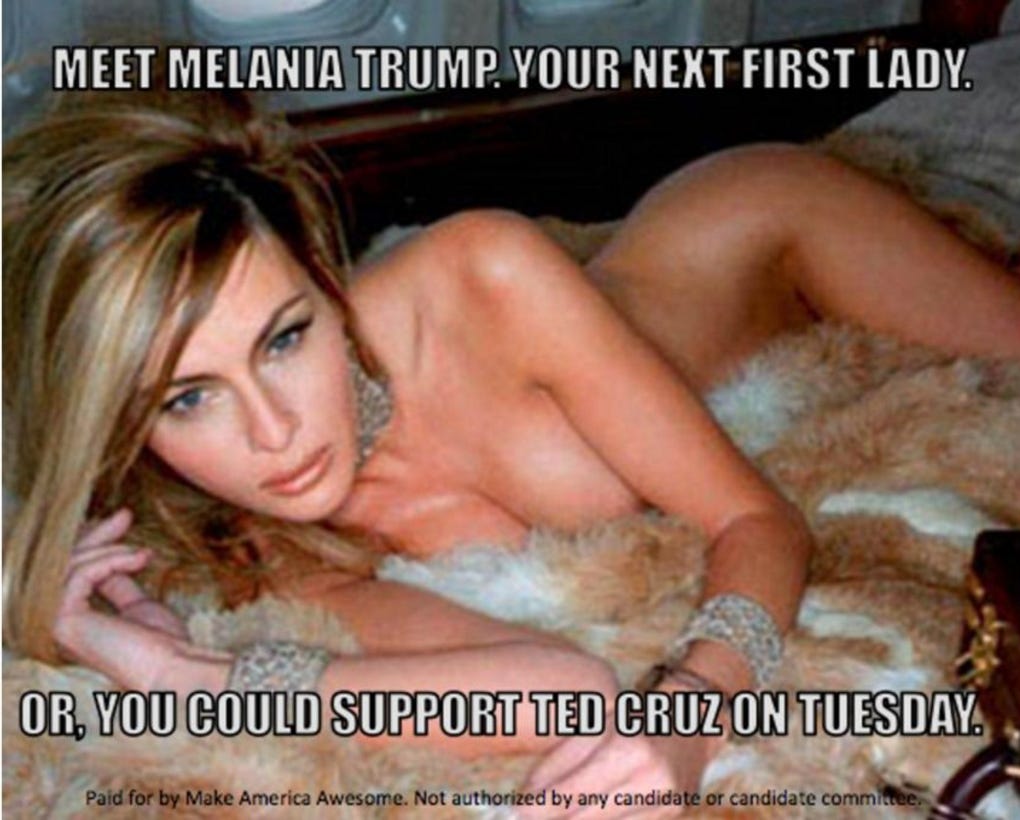 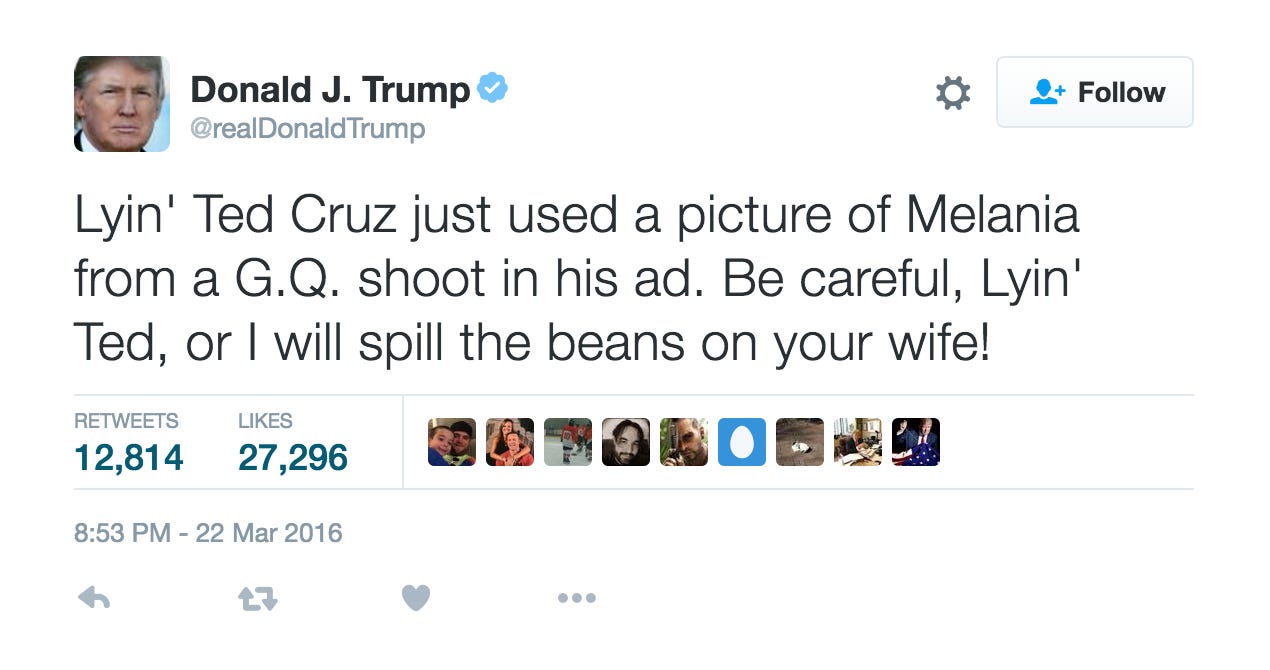 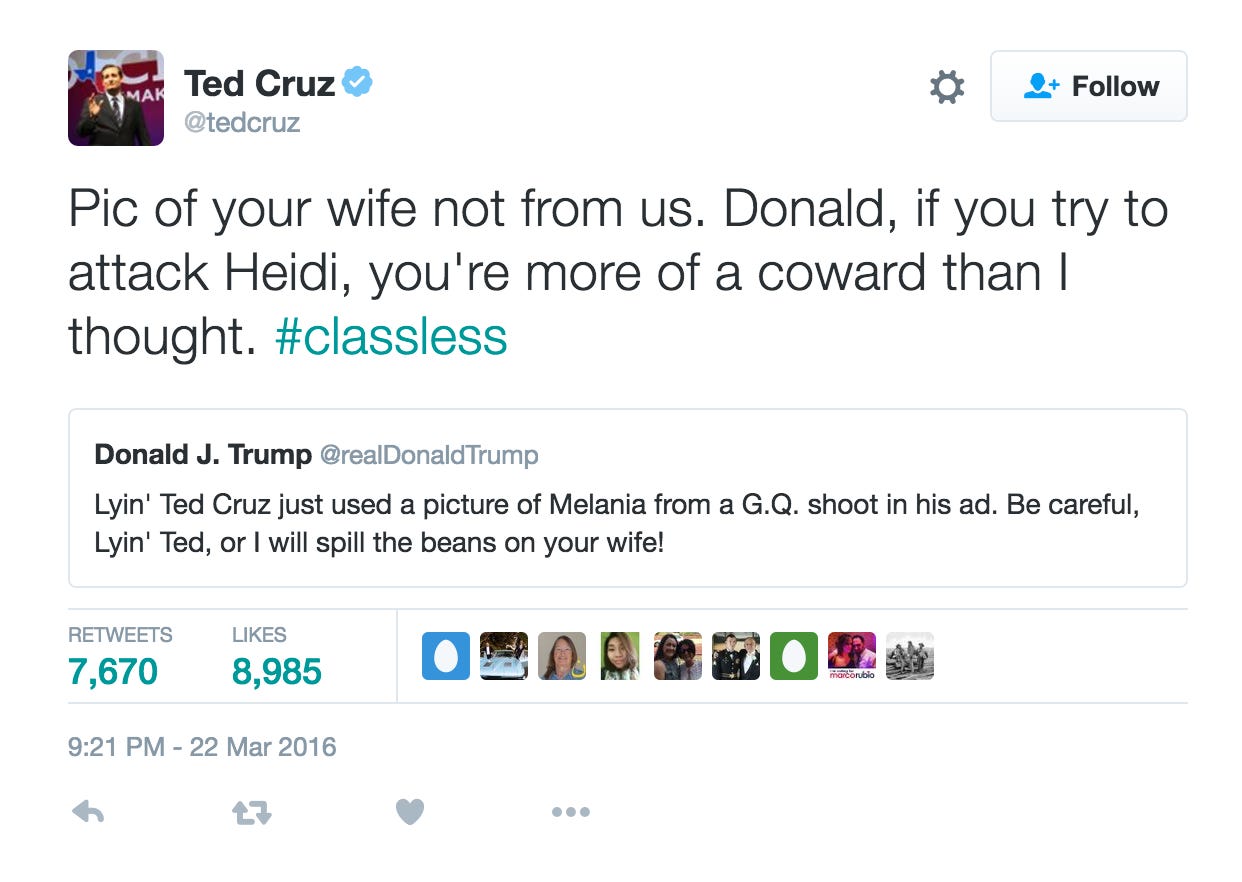 CNN – Donald Trump escalated his feud with Ted Cruz on Twitter Tuesday — but this time he also involved the Texas senator’s wife. The real estate mogul tweeted that the Texas senator should “be careful” or he would “spill the beans on your wife” Heidi Cruz. “Lyin’ Ted Cruz just used a picture of Melania from a G.Q. shoot in his ad. Be careful, Lyin’ Ted, or I will spill the beans on your wife!,” he tweeted Tuesday evening, just minutes before polls closed in Arizona. Trump tweeted and deleted a similar version of the Tweet about 10 minutes earlier. Trump appears to be referring to a Facebook advertisement targeted to Mormons that shows Trump’s wife, Melania, posing nude. That ad was produced by an anti-Trump super PAC, Make America Awesome, which has no known connection to the Cruz campaign. Cruz responded on Twitter by saying that the ad was not from him and if he went after his wife, then Trump is a “coward.” “Pic of your wife not from us. Donald, if you try to attack Heidi, you’re more of a coward than I thought. #classless,” Cruz tweeted. Heidi Cruz is a senior executive for Goldman Sachs, and took a leave from in order to help her husband’s campaign. She has become one of the campaign’s most accomplished fundraisers.

Alright first thing’s first – I thought that picture of Melenia naked saying “This could be your first lady” was a pro Trump ad. Thats how fucked up in the head I am, and how fucking JACKED UP this whole election is. I took one look at that and just automatically assumed they meant that it would be awesome if Melenia Trump was First Lady. Like “We could have this smoke…or you could elect lame ass Ted Cruz and his ugly wife President.” Thats where we’re at. Or at least thats where I’m at.

Secondly, we absolutely NEED to know what the fucking beans are! Spill that shit, Donald! Spill them! You cant tweet something like that and then not explain yourself. Thats like when you say “I got a story to tell…ah nevermind I shouldnt say anything.” Too late, bro. You already committed to the public. You already got our dicks a little bit hard. Now you gotta follow through. What did Ted Cruz’s wife do?

100/1 – Heidi Cruz has ties to terrorism – Probably pretty unlikely. You never know though. Politics is a dirty game.

6/1 – Heidi Cruz once supported Hillary Clinton – Something where Goldman Sachs backed Hillary and Heidi was involved.