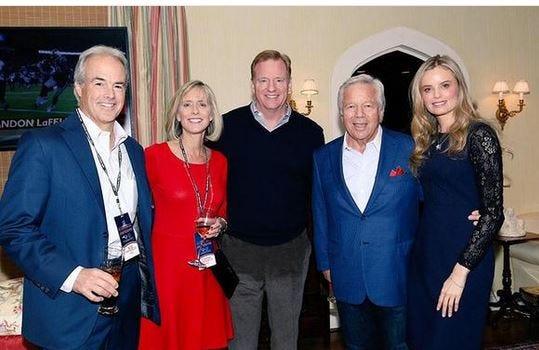 BOCA RATON, Fla. – New England Patriots president Jonathan Kraft is a guest on “Quick Slants” on Tuesday night (CSNNE, 7:30 p.m. ET), and he went 1-on-1 from the NFL’s annual meeting with Tom E. Curran in an interview that will air on the show. Kraft shared his thoughts on how things have unfolded with the league’s Deflategate punishment and ensuing appeals process, essentially speaking to the team’s fans. “We empathize greatly with their feelings and I can tell you that we are extremely angry, disappointed, frustrated, confused. We feel the exact same way,” Kraft tells Curran. “I think a lot has gone on behind the scenes over the last couple of months where we feel like we presented a lot of evidence and a lot of information which would hopefully lead the league to conclude that maybe the judgment that was initially made was not appropriate. The league has essentially decided otherwise. It’s very frustrating. It’s very disappointing. “I think, for us, the frustration level along with the anger, because when you’re inside what’s going on, and the frustration of knowing what the facts are and how the science works; which was something that under oath was acknowledged by the league that they knew nothing about at the time. It’s very disappointing and frustrating. “For us, you can go to court, but when you sign up to be a part of this league, you agree essentially not to sue the league. But even if you did go to court, you go to court and win money damages. It will take longer than the time before the draft happens. Money isn’t the issue here. The issue is getting a draft pick back. At some point, you just have to realize it’s not going to happen and the best revenge will be putting the best team on the field next year and hopefully having a very successful season.”

I’ve seen this subject bandied about the internet. Some Pats fans sort of getting annoyed by the Krafts talking about how upset they are about Deflategate and the draft picks. Mad that they are just posturing now to make it seem like they didn’t cozy up to Goodell after this fiasco was over. I’m firmly on the side of those who think they should just keep their mouths shut.

Listen there is no doubt the Krafts could have made this situation a lot more uncomfortable for the league if they wanted. Instead they were partying with him the night before the AFC title game.  That’s not to say they didn’t do anything because they did. They had the entire Wellsincontext.com website. Kraft publicity blasted the league on multiple occasions. He apologized to Pats fans for abandoning the cause. So it’s not like the just let Goodell ram his fist up their ass and said thank you sir may I have another.

But at the same time Jonathan Kraft sums it up perfectly.

“For us, you can go to court, but when you sign up to be a part of this league, you agree essentially not to sue the league”

Boom there it is. That’s it. That’s the nuts and bolts of it. The owners are in this to make money. The Krafts hate what Goodell did, but did they hate it enough to risk screwing up something that is virtually impossible to derail? A never ending money train? Nope.

And it’s sort of tough to blame them. As Mr. Kraft clearly pointed out the Patriots are the most wining franchise in sports history. All they’ve done since he saved the franchise is basically get to the Superbowl every single year. They have nothing to apologize for.  It’s almost like he was saying to the fans “shut up and be happy for all the success.” They weren’t going to flush that down the toilet over deflategate. This was just one fight they weren’t willing to go to the mattresses for. Truly for them the best revenge is winning. My issue is that they should just leave it alone. Don’t pretend to be so disgusted and irritated by it and pretend you couldn’t have done more when to a degree you rolled over.