FTW – Ellen Degeneres, the fairy godmother of good news, did something decidedly Ellen on Monday for comedian Quincy Jones. Jones, whowas diagnosed with Stage 4 mesothelioma cancer last summer and given one year to live, has wanted to produce his own comedy special for some time. To help him cover the costs, Jones’ friend Nicole Blaine, also a comedian, launched a Kickstarter campaign. Degeneres heard about it and invited Jones on The Ellen Show to tell him that his dreams were about to come true. “You mentioned last time that you want to do a comedy special,” Degeneres says to Jones. “That it’s really important for you to do a comedy special.” “Yes, I really want to do it,” Jones says. “So what you don’t know is I– we called the head of HBO, and your people didn’t even tell you this, but HBO is going to air your special.”

On a day full of bad news comes some good news, considering the situation at hand. Props to Ellen for being the most powerful person in show business and getting this done. There are no losers in this- HBO gets awesome publicity, Quincy Jones gets to live his dream, Ellen gets to make dreams come true, and Shutterfly gets people to know that they still exist. Great work all around by Ellen and HBO.

PS: I’m not sure I’ve ever seen a black person with gauges. That’s a bigger longshot than him getting a comedy special on HBO. 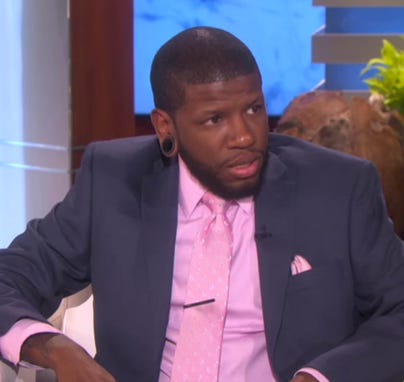