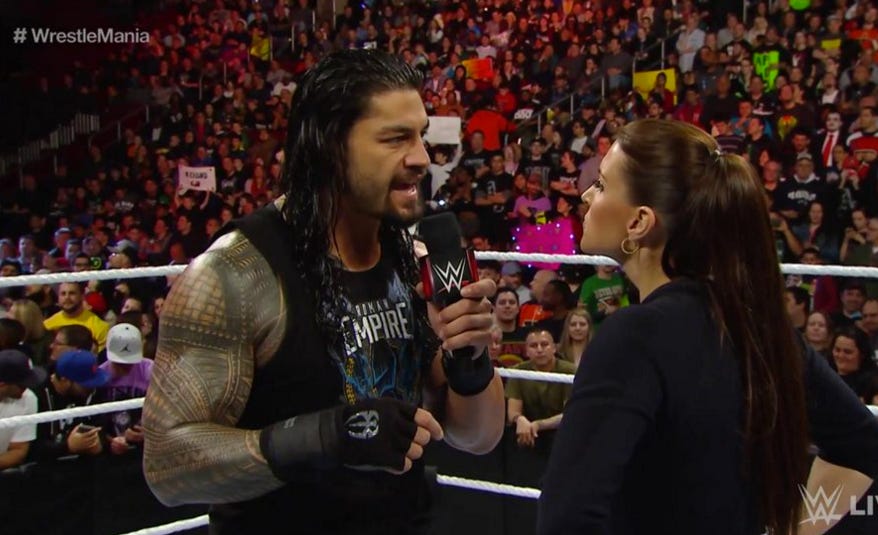 Two weeks until Wrestlemania. Storylines should be ramping up, the build to the biggest PPV of the year should be electric, and the crowd should be intense. Take the opposite of all of that, and that was your 3 hours of Raw last night. Given the circumstances, it very well might be one of the worst 5 Raws of the last 5 years. Mania is right around the corner. They were in Philly. Everything should have been building, maybe with a few shocking twists to get more eyeballs on the product before Wrestlemania….anddddd nothing. Nothing happened. It was 3 hours of awkwardness, bad matches, terrible story telling, and all around boring mediocrity. When wrestling is good, it can be really good. Last night was so far from good that the WWE would have been better off running a Chris Benoit memorial show. That’s how bad the episode was, less the AJ Styles vs Kevin Owens match, because they actually give a fuck.

Let’s quickly go through some of the shit that happened last night:

– I swear to god they better not ruin The New Day. Why don’t they just let cool things be cool? You can tell they are watering down the New Day now that they are faces, and Michael Cole is shouting “booty!” every 4 seconds. Give it a fucking rest, mate. Luckily New Day are smart enough to know this themselves and still appear to have a large amount of creative control over their promos and characters, but when WWE (Vince) sees someone is popular, his move is to swoop in and ruin them. Pray for the New Day.

– Kane choke slamming Big Show. Did he choke slam him or did Big Show just tumble off the top rope? Hard to say. Sure got me hyped for the Andre The Giant Memorial Rumble match though, for sure not. They don’t even have enough people healthy on the active roster to fill a 30 person rumble. Maybe Scotty 2 Hotty should expect a phone call soon?

– Fandango is still employed by WWE and had a Wrestlemania rematch vs Y2J. AJ Styles distracted Y2J, who still won anyway. Now we get to see them fight at Mania, completely disregarding we’ve already seen them square off 4 times.

– The women, sorry…DIVAS, were white hot for a bit. Charlotte was being written like a strong heel, Becky was playing her role perfectly, and Sasha came along and everyone knows Sasha has GOAT heel potential. And they, of course, have basically been pushed aside. Why isn’t Sasha being the boss? Her potential is sky high, but as long as Vince is around, they aren’t going to treat the women, sorry…Divas, equally.

– A lot of people are upset the IC Title match isn’t a 1 on 1 match between Sami and Kevin Owens. I’m ok with the 7 person ladder match. Good for Zack Ryder for getting a match at Mania, man has he been treated like garbage by this company, good to see him get in a high profile match even if it doesn’t really make sense. A 7 person ladder match with Sami, Owens, Ryder, Ziggler, Sin Cara, The Miz, and Stardust has no choice but to steal the show. You can’t throw them all in a ring together with some ladders and Mania and not expect ridiculous spots to happen. This is why I’m so pissed Neville is hurt, this would have been his time to shine. Regardless, I expect good things to come of this match.

– Ok, let’s talk about how delusional Vince is. His music hits, decent pop. He gets into the ring and rambles about god knows what, with his “HUGE ANNOUNCEMENT” being if Taker loses, it will be his last Wrestlemania. That was seriously the HUGE announcement they teased all show. When Vince stood in the ring while the crowd exploded in cricket sounds because it was the dumbest announcement ever, he looked dumbfounded. He really, honestly thought the place would go bananas for him and that announcement. It’s just so funny listening to Vince talk. He still is saying things like “my former son Shane” as if people are so stupid to believe Shane is literally not his son anymore. Vince is stuck 30 years in the past, and it’s getting sad. You can just tell when a story line has Vince’s stench all over it, as it usually is stupid, has wacky lines and promos, is perverted, or straight up just doesn’t make sense.

Even though there are a ton of injuries on the roster, there is still quite a bit of depth. Rather than develop that depth, Vince shoved Reigns down everyone’s throat for 2 years, and it is a disaster. An absolute disaster. Last night when Reigns came out at the beginning, it was a downpour of boos. Then when he did that weird “slow motion garage door opening spot” when he attacked HHH, it was just so awkward. It didn’t get cheers, or boos, it just…was. It was indifference. And that is their main event at Wrestlemania. Pure indifference, weighted heavily towards people hating it.

And then our main event. Dean Ambrose vs…Braun Strowman? What? Why? There’s no favorable outcome for this match. If Dean wins to look strong heading into Mania to face Lesnar, it makes Strowman look weak. If Strowman wins, it makes Dean look incredibly weak. So what we got was Ambrose vs a guy who can’t even wrestle singles matches yet in an absolute bore-fest. It was just so, so bad. We are 2 weeks from Mania and the writing team couldn’t write up a single story last night for the main even that made a lick of sense.

So here we are, one more Raw until I fly to Dallas for Mania (oh sick brag bro!). I cannot imagine HHH is one bit happy with last night. I don’t know how he could be. They need to lock Vince in a room with a few yes-men, close the door, and throw away the key. Slide gruel sandwiches under the door every 12 hours, and don’t let them out until after the Raw after Mania.

Man, Mania ending with Reigns with the belt is just going to be the most awkward ending ever. Last year was the Rollins cash-in, which was one of the most exciting endings. Do they have something, anything at all, up their sleeves this year to salvage it? I just don’t think they do. Vince wants Reigns to be the guy, the face of the company, and it doesn’t look like he plans on budging this time.