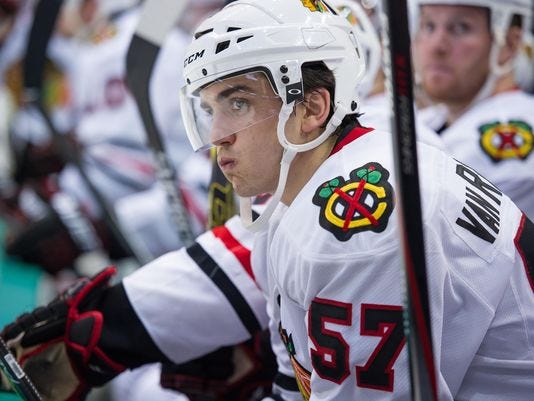 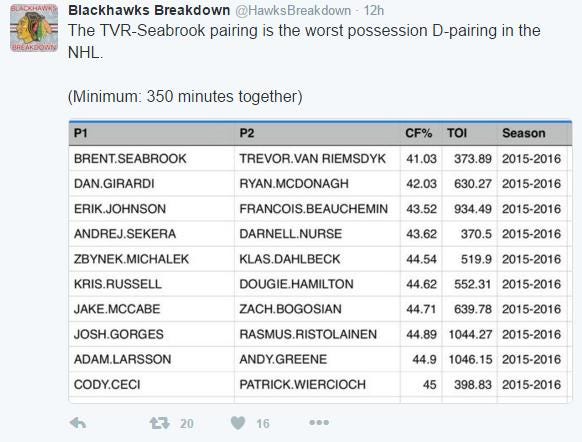 Guys, we JUST talked about this.

“The problem with corsi people and hockey twitter isn’t that they don’t know anything. It’s that they know so much that just isn’t so.”–Barstool Chief

I explained all my issues with Corsi/Fenwick in a blog about Kris Russell three weeks ago. You can pretty much substitute “TVR” for “Kris Russell in that blog and it would pretty much hold true. TVR is a steady player. He’s not physically imposing, he doesn’t skate like Erik Karlsson, he doesn’t intimidate people like Shea Weber. He’s just a guy that you can trust out there. He makes the simple play. The safe play. He lives to fight another day. That style of play won’t jump off the screen. And because it also doesn’t translate into shots necessarily, it won’t lead to a great CF% as you can see in the chart I embedded above. However, if you really think that Seabrook and TVR are the worst pair of defensemen in the NHL then I can’t help you. TVR is a good player, still learning and growing. He’s basically still a rookie with only 91 NHL games under his belt. He is being thrown into the fire recently. Logging major minutes. Last night, again, he led the team in even-strength ice time with 26:02. Now, I’m not saying I want TVR leading the team in ice-time once the playoffs start, but you can certainly trust him for 20 minutes per night. The real story is just that the internet picks a guy every year to hate. It’s been Brandon Bollig, last year it was Johnny Oduya for bit, now it’s Trevor vanRiemsdyk. The same crowd that points their pitchforks at a particular player also claim that Joel Quenneville is a meatball who basically wins 800 games and three Cups through sheer dumb luck. So TVR is in decent company.

As I’ve written before, I really like data and statistics, but anyone with a brain can tell you that using shot attempts as a proxy for possession is flawed logic. Not all shots are created equal, and sometimes taking a shot isn’t the right play. I don’t have access to tracking data from Sportlogiq, but I’d guess that TVR has much better looking data than what shows up in Corsi/Fenwick numbers. It’s important to remember that, despite what hockey twitter people tell you, shot attempts don’t = possession. It doesn’t correlate enough to be a sufficient proxy.

There are crowds that want to see more of Erik Gustafsson. I like Gustafsson a lot as well. It’s hard not like him. His talent is obvious. Really good skater, nice offensive instincts, and he can make stuff happen. There is, however, more of a “boom or bust” factor with Gustafsson. His gap control can get a little hairy, stick positioning isn’t always perfect, and he takes more risks. He might ultimately become a better defenseman than TVR, but right now he isn’t. There tends to be this narrative that Coach Q hates young players. That’s not true. He has a long track record of putting young guys in the lineup and giving them major minutes. Coach Q doesn’t like young players that make a lot of mistakes. Gustafsson is still in that category. Again, I really like Gustafsson, but at this point I don’t trust him as much as I trust TVR.

This whole situation reminds me of a few years ago when the people were saying Duncan Keith was no longer an elite defensemen and Coach Q wasn’t even using him against the opponents’ top line. In reality, Coach Q was indeed putting Keith against the “2nd line” often times, but that was because he was putting his Selke winning center against the opponents 1st line. Balanced defense. Selke guy against one line with your 2nd pair, and Norris trophy guy against their other top unit. What a concept.

This is the time of year for tweaking and experimenting. The playoffs are locked up. The Hawks have proven that where they get seeded doesn’t matter so much. Just because TVR is getting a ton of minutes now, or Mashinter is in the lineup, or player x is on the 3rd line when he might be better suited on the 4th…It. Does. Not. Matter. When the games count, and the lights are bright, the Hawks will show up like they always do and Coach Q will put the team in the best position to win. Dynasty Reign.