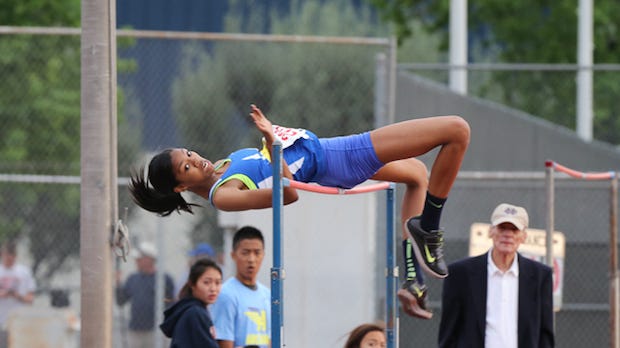 PFT – Vashti Cunningham, the 18-year-old daughter of former NFL quarterback Randall Cunningham, has won the world indoor high jump championship. With her dad in the stands, Cunningham jumped 6 feet, 5 inches, to take the title. She is the youngest woman this century to win a world indoor track and field championship in any event. A high school senior, Cunningham announced afterward that she has decided to turn professional and will not compete in NCAA track and field. Her summer goals are graduating from high school and then winning an Olympic gold medal in Rio. Once among the biggest stars in the NFL, Randall Cunningham has urged his daughter to take her time and enjoy herself before becoming a pro athlete. “I don’t believe you should peak in high school,” Randall told the Las Vegas Sun, before adding, “She’s the one that has to make that decision.”

Props to little Cunningham for plowing the field of woman high jumpers. The road to get to the top must have been paved with iconic feats of athleticism.

But for real, those long strides are reminiscent of #12. She’s 6’1, jumps 6’5, and probably runs a good 4’4 with a cannon attached to her shoulders. Plus those mitts gotta be bigger than most QB’s in the league. If Vashti is 1/10000th of what her father was in Techmo Bowl then she would be better option at QB than what most teams are rolling out there. Wouldn’t be shocked if Chip put in a call already. Gotta be better than Blaine Gabbert.

Man do I wish I was older to appreciate Scramblin’ Randall in his prime. Sure, Cunningham had his best year with Randy Moss and Cris Carter in ’98 with the Vikings (after freaking Ray Rhodes dumped him in favor of Rodney Peete). But he’ll always be an Eagle at heart. Even though I can’t imagine how that death turf at the Vet is haunting Randall as he gets up in years. Constantly soaring 10 ft into the air and falling on that concrete should’ve shattered every bone in his body and then some.