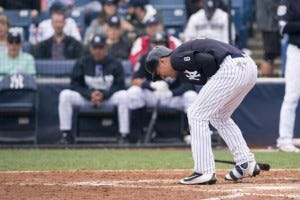 TAMPA, Fla. — The Yankees were able to exhale Saturday as X-rays and a CT scan on Jacoby Ellsbury’s right wrist came back negative, showing no fracture and giving the outfielder two weeks to be ready for Opening Day.

Ellsbury was hit on the right wrist by a 90-mph fastball from Julio Teheran during the club’s 3-2 victory against the Braves. Ellsbury immediately left the game for a pinch-runner and left George M. Steinbrenner Field for tests at a local hospital.

“He was in pain. He had seam marks on his wrist,” Yankees manager Joe Girardi said.

This could be great news because if you saw this live, you know it didn’t look good. The biggest concern is that this is the 3rd year in a row that Ellsbury is missing time in the spring with an injury and with Gardner nursing a bad wrist and Beltran having banged up knees, you don’t want question marks all over the outfield.

The other worry here is that last year we saw Tex get misdiagnosed and miss the rest of the season then Bird wait until right before Spring Training to get a shoulder injury fixed. In the best case, this is just a few days off and Jacoby is back in the lineup come Thursday. He may need to miss an extra day here and there, over the next 2 weeks so he’s ready to go for the start of the season. But if he can play and set the table for the rest of the lineup like he did early last year, we will be a better team than last year.