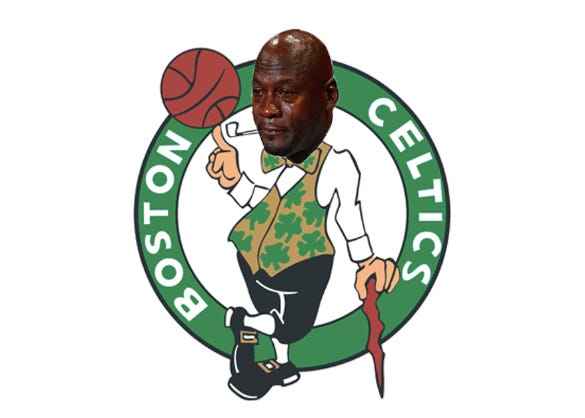 We’ll get to the game in a second, but I want to start today by simply saying thank you. 1 year ago this morning I hit publish on my first Barstool Celts blog and I didn’t know what to expect. I knew that I was a Stoolie who felt the site needed a true consistent Celtics voice since they were making moves towards returning to the playoffs, and I also knew that there were many fellow stoolies that felt the same way. While it was weird to sort of steal Hank’s thunder, he was living the dream fucking college girls all over the country so I didn’t feel that bad. I thank you all for adjusting to some long ass blogs about a random game in January. I thank you all for riding this wave back to relevancy with me, and it’s you guys that I do this for. It certainly isn’t for the fame and fortune. I have no ida what the google analytics are on this blog, but for those who read it, I’m sincere when I say thank you. There are a lot of talented and funny people on this site and the fight for #pageviews is fierce.

Ok, that’s enough, let’s all relive last night because we hate ourselves.

- In a night where they couldn’t seem to do much right, there were some bright spots. For example, we started to see Olynyk be a little more comfortable in his second game back. He played nearly 30 min, and while his conditioning is still a ways away, we saw last night the ways in which he can truly help this team. His line was elementary, but these two plays basically sum up how he can help.

As one of the better three point shooting big men in the NBA (not hyperbole, look it up) having the ability to pt the ball in Smarts hands where he can create, as opposed to being the guy who receives the pass, is a major upgrade

Marcus Smart just sliced up the Toronto defense to get Kelly Olynyk an open 3: pic.twitter.com/BbHS7IkdgV

Because once teams realize they have to respect his jumper, he has the ability to put the ball on the floor, get into the paint, keep his head up, and make the right play. Even though it happens in super slow motion, this came at a time where the Celtics desperately needed to take it to the basket, and surprise surprise, it worked

– For missing their best wing defender, I was pretty pleased with how the Celtics were able to contain DeRozen. It was by far their best effort compared to the other star level SFs they’ve just faced over the past week. Harden had 32, George 25, KD 32. So DeRozen going 6-14 for just 15 points was a welcomed sight. Crazy part is he only took 2 FTs so the Celtics did a good job of defending him without fouling.

– The highs and lows of being a rookie. Brutal. But, for those counting at home, we’re now just 2,957 behind Ray!

That three to end the third is what gave me a little taste of hope. Battling all the way back to be down just 5, and with RJ making shots, it was a glimpse into the future.

– There’s a reason the Celtics were bale to claw their way back into this game, and it’s not rocket science. Here is how they fared in the opening quarter, where they found themselves getting blown out 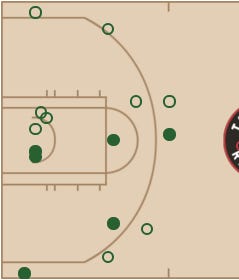 And here is how they fared in that third quarter when they got back into the game. Notice the difference?? 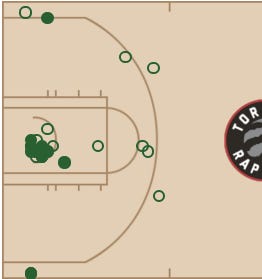 When the Celtics are aggressive and take it to the basket, two things happen. One, they score, which is sort of the goal. The second, by not taking a quick contested shot, they prevent Toronto from getting out and running all over them. It should come as no surprise who led this change in offensive strategy…hey Lowry, ADIOS!

Isaiah Thomas with the up and under bucket! C’s looking to make a run in the third, tune in now on @CSNNE pic.twitter.com/oPrGnYYfeL

Amir Johnson throws one down in his old stomping grounds! Boston is gaining ground deep in the third quarter: pic.twitter.com/E4bhyu0PFX

- Another hat tip to the young pup Terry Rozier. All you can ask is that a guy gives you everything he can when he gets an opportunity, and that’s just what Rozier has been doing. Terry was a team high +8, going 3-4 (1-1 from deep) 7 points 3 rebounds 5 assists in just 10 minutes is pretty impressive, even if it was during garbage time.

– A common theme during this four game slide has been that each game comes with a certain frustration. Letting Luis Scola score 17 points to start this game is a feeling I don’t know how to put into words. Since when did Scola become the Celtics killer? It was basically a flashback to the Jan 20th loss when he went 8-12 for 18/5 in just 25 minutes. Well, in 21 minutes last night he went 7-12 (3-5 from deep!!!) for 17 points. He scored every single one of his points in that first quarter. Didn’t record another point the rest of the game. That is BRUTAL. You know how in golf you can’t win the Masters on Thursday, but you can lose it? Well, the Celtics couldn’t win the game in the first quarter last night, but they fucking lost it then.

– For a team that played the night before, I certainly did not expect this start. The Celtics refused to guard the three point line early as the Raptors started 6-10 from deep and when you add in the 6 turnovers and 40% shooting, the outcome should not be a surprise. That was maybe the worst quarter I’ve seen the Celtics play since their 3rd quarter against OKC.

– When you struggle to hit shots, you can’t play this porous on defense. Toronto’s splits 48%/47%/72% is just not going to get it done if you want to steal a win on the road. Raptors starters shot  11-18 from three, thats inexcusable. Sure we were missing Crowder, but Smart/Avery/Turner just did nothing to contest on the perimeter. The defense from the Celtics has been abysmal over the last two MONTHS, so it’s no surprise they aren’t beating good teams.

What’s misleading is they were able to go on that great streak at home, so people sort of ignored the defensive struggles. They are giving up way way way way too many points each and every night. Especially if they are going to continue to struggle shooting like this 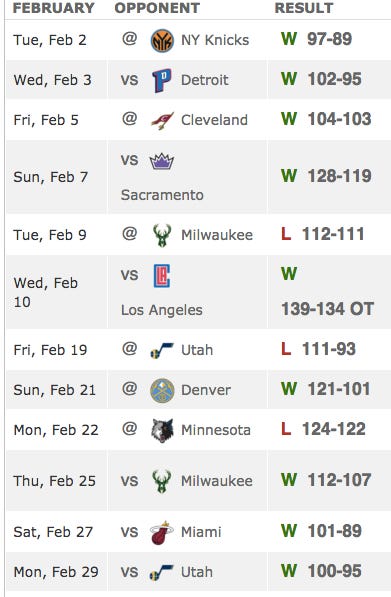 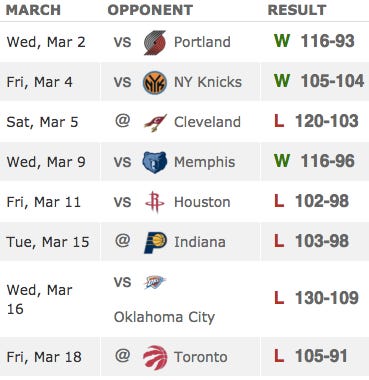 Isaiah Thomas was not particularly thrilled with the referees: pic.twitter.com/AFWady7VpP

Allow me to show you some visuals to back up his claim. Here is blatant contact on a Isaiah drive, I mean clear as day. Well, as you might have guessed, no foul was called.

Now, when the Raptors announcers even admit it, that’s not me just being a homer. So here’s why Isaiah is frustrated, because this happened literally the possession before

And what I think Isaiah was expressing wasn’t just about last night, but more about the last few weeks. Sure TOR had a 25-12 FT advantage, but in each one of these losses, and even the MEM game which they won, they’ve been getting boned. Now please don’t confuse this with why they lost those games. It’s not. But what Isaiah is saying has some truth to it whether you want to accept it or not. The problem is that the Celtics let this impact their play. Mentally they let these non calls and tacky fouls get into their brains and they lose composure. That’s what I really don’t like about this whole thing.

– Sullinger was the main culprit, but last night we were long 2’d to death. It just didn’t make sense to me that in a game in which you need to chip away at a lead, you are not moving the ball, only getting one shot, and that shot is a lower percentage long distance jumper. So fucking annoying when you then saw how they were able to change the game by taking it to the basket.

– RJ Hunter’s two early 4th quarter turnovers. One hits him in the fucking face, the other just a bad pass. This is sort of what happens when you don’t give your young guys a chance to make mistakes, then throw them into high pressure situations on the road against good teams. Don’t blame RJ to some degree, but you just can’t make those plays.

– In my mind, where the game turned. The Celtics down 5 (74-69) with about 1:16  left in the third quarter, for some reason Evan Turner takes a three. He of course misses it, the Celtics don’t get back, and Terrance Ross makes his corner three to push it to 77-69. Could have been two, instead it became eight.

– If this wasn’t an omen, I don’t know what omens are

– Let’s take a minute to talk about Avery. The guy has been in a terrible terrible slum It’s not a coincidence that since he started struggling to make a basket, the Celtics have struggled. His ability to knock down mid range jumpers is too important to this offense. It’s not pretty

Avery is shooting just 40% during the month of March (23% from deep) averaging a measly 12/2/2. Unfortunate turn of events since he entered the month shooting 48% and 44% from deep averaging 16/3/2 in February.

– Everything about Tyler Zeller’s performance makes me angry. Everything.

– There’s no way to avoid it, that 4th quarter was absolutely pathetic. All that work to cut what was once a 20 point deficit down to 5, you have all the momentum, and you give up a 14-2 run to start the final quarter. Celts couldn’t hit a shot, and their 6 turnovers in the frame didn’t help. Missed long two’s and turnovers, it was as if the first quarter came back to life. Really disappointing since the same thing happened in the OKC game, just in the third quarter. When they Celts have needed a hot start to pull a game out, they haven’t been able to do it. Their sceond FG came with 4:55 left in the fourth. Sigh.

So what we are looking at with this team at the moment is what I like to call, worst case scenario. Heading into this stretch I don’t think any of us saw them losing this many games, because they’ve been playing so well. Yes, the Crowder injury hurts them on a few fronts. They lose a guy who can defend and make shots, but it’s also caused Brad to mess with his rotations in a weird way, and the team looks disjointed. When you look at the team’s they’ve lost to, who cares about TOR/OKC/CLE because no one has ever thought of the Celts on their level. It’s the HOU/IND ones that stick for me, and basically their overall effort. Celts have lost something like 50 in a row when they get down by 19, and for something that almost never happens, its seemed to become the norm as of late. That has to change.

Fortunately, the Celts get PHI on Sunday which should hopefully get them off win number 39. Been stuck on that shit forever. 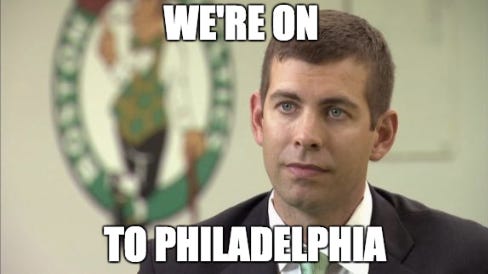