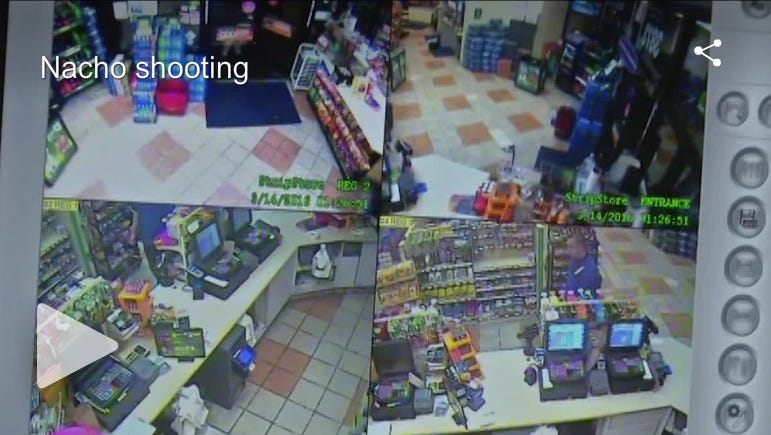 Fox 5 – Police said a shooting at a Las Vegas convenience store started over nachos. Surveillance video of the incident shows two men in the store making the nachos Monday night. They then try to leave the store. That is when the clerk told them they needed pay.  According to the police report, the men told the clerk “we’re gangsters who don’t pay.” The clerk followed them out and confronted them. One of the men followed him back into the store and shot at him.

Is it fucked up to shoot a 7-11 clerk over some nachos? Sure. Absolutely. But you have to…absolutely have to respect this guy for talking the talk and walking the walk. I’m so sick of these fake gangsters who talk a big talk and then have nothing to show for it. So many guys who think they go hard then are softer than baby shit. So as ridiculous as it is that these guys walked into the convenience store and shot at a clerk over a $2.99 plate of nachos, at least they gave him fair warning. Gangsters don’t pay for gas station nachos. And gangsters shoot motherfuckers who disagree.

The main point here, of course, is pretty much the Barstool motto: don’t try to be a hero. When you’re making 8 bucks an hour at the register of a 7-11 or CVS or what have you, don’t be a hero. Sure you are going to try to make people pay and not steal, but running out the door to confront someone? Swallow your pride, dude. You’re poor. You’re working the overnight shift. The company you work for makes billions of dollars and doesn’t give a shit about you. It’s cashiers and Walmart employees who need to remember this the most. Every 6 months we hear about a Walmart employee who runs into the parking lot to tackle a guy stealing a pack of underwear and ends up getting shot. The Walmart family has something like 5 of the 10 richest people in the world. Maybe let that pack of undies go. Bottom line: if your job still pays you per hour, act like it. Because best case scenario you get the person to pay $2.99 for nachos or underwear, most likely case scenario, you’re dead. And ain’t nobody wants to die over a pair of boxer briefs.