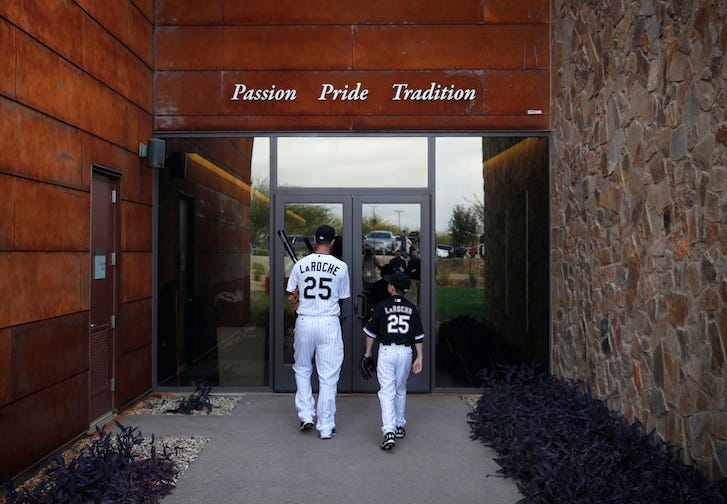 I honestly don’t even know how to approach this. It’s a complete and total joke.  After thinking it over a bit, this is what it boils down to for me:

– Kenny Williams is the boss.  You do as your boss tell you.  No one agrees with their boss 100% of the time, but in the end what he says, goes. If you don’t like it, quit.  That’s exactly what happened with Laroche here.  For this part of the situation, no one was in the wrong and no one was in the right, even though Kenny’s request was completely reasonable by all accounts.

– This entire thing could and should have been kept in house.  There is no reason for it to be an issue being picked apart by all forms of media. This part is COMPLETELY Laroche’s fault.  He’s hashtagging #familyfirst and shit and getting his media cronies to try and team up with him.  Way to make your 14 year old son the center of a complete and total joke of a controversy, bro.  That’s exactly what the daddy of the year would do

– If the team honestly considered boycotting the game, it wasn’t because a 14 year old created a divided clubhouse.  I don’t believe that for one second.  That’s why I think there has to be a deeper, darker issue with the team.  25+ grown men aren’t going to boycott a game to show support for a dude who just stepped away from $13MM because their boss wanted to limit his son’s access to the team a bit.  It’s not that big of a deal.  Something worse than #DrakeGate has been festering and this might have just been the boiling point

– Chris Sale motherfucked Kenny Williams AGAIN recently.  There have been whispers of an ongoing rift between KW and Sale for a long time now.  He’s told KW to fuck off multiple times at this point.  Look, Chris Sale is the face of the franchise.  A team leader doesn’t motherfuck his boss, period.  That is in no way, shape, or form the kind of behavior the face of a franchise, bona fide superstar, and most importantly the team leader should be exhibiting. Attitude reflects leadership.  If the best player and the player who’s supposed to lead this team to the Promise Land is motherfucking his bosses it sets a negative tone for the rest of the club.  The Sox have had glaring attitude problems for years now, and the best English speaking player on the team hasn’t helped, in my opinion.

– More on Sale vs. KW: it seems that Kenny Williams has a massive ego, is power hungry, wants complete control, and the players are sick of it.  If that’s the case and Drake fucking Laroche was the boiling point, KW really does need to step the fuck off.  Sale saying “get the fuck out of the clubhouse and stay out,” isn’t wrong in premise.  His approach to telling KW to step off is. Step into his office like an adult, present your argument and find a common ground.  Bam, problem solved.  Players should play and team vice presidents should team vice president.

Now, in the end, I do NOT think this will carry over into the teams’ performance this season. If the Sox do end up sucking, it will be because they suck; not because the man who is second in command of the entire organization has limited a 14 year olds access to the clubhouse.   Shit, this could even be a good thing. If the players rally around this whole shitty situation as use it as a big ass “FUCK YOU” to Kenny Williams then I am alllll for it.  It doesn’t matter what their rallying point is. But if my hunch is correct, and the team has a problem with the executive VP, there’s only one thing left to do:  win the whole goddamn thing.  Win in spite of him.  Win in spite of anything you want.  Just fucking win goddamnit!!!