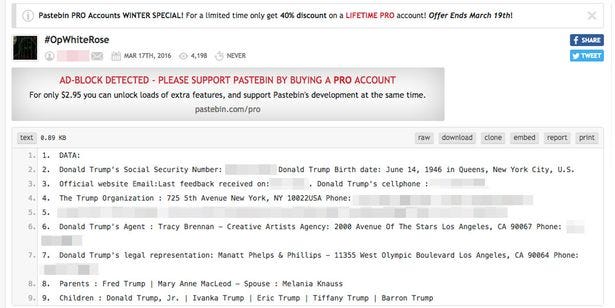 AOL- Hacker group Anonymous released phone numbers and a Social Security number allegedly belonging to Republican presidential candidate Donald Trump on Thursday.  The alleged cyber attack comes just less than two weeks after the mysterious group declared “total war” on the GOP front-runner in an ominous video posted to YouTube.  News of the hack set the social media world on fire as many rushed to dial The Donald’s digits in hopes of getting a word, or possible insult, from the billionaire business man — including AOL News.

I told you guys yesterday that Anonymous declaring was on Trump was going to be interesting.  24 hours later we already have Trump’s social security number and his phone number in the streets.  Sure those computer voices are still really scary, but getting all this personal info is pretty interesting and already more than they got during their entire war on Barstool.  Granted there was only target in the whole company worth hacking that actually had real money or anything to lose.  I actually think some of the Barstool bloggers would get a better credit score if their social security number was leaked to the world. And Trump has been an A+++ counterpuncher this entire campaign. Can’t wait to see what he fires back at Anonymous.

But the next steps the hackers take will be interesting.  Because once you have a guy’s phone number and social security number, the real juicy stuff can’t be far behind, right?  Because a political version of The Fappening is all this Presidential race will need for complete pandemonium.