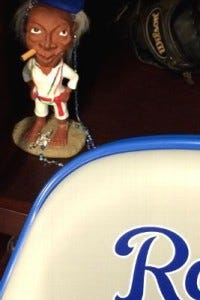 SURPRISE, Ariz. — The last hit infielder Christian Colon recorded for theKansas City Royals gave them a winning lead in Game 5 of the World Series. But that was more than four months ago, and coming into Wednesday’s spring-training game against the Chicago Cubs, he was staring at an 0-for-22 start to his 2016 and in desperate need of a knock.

Colon finally broke his bad Cactus League run after a second-inning out by belting a ground-rule double in the bottom of the fifth inning off Cubs starter John Lackey.

But the utility man could also admit that he submitted to a little bit of old-fashioned baseball superstition and sought extra help to bust out of his slump: A Jobu statuette, modeled after the voodoo doll in “Major League” that inspired slugger Pedro Cerrano.

“I ordered it last year, and I didn’t get to use it last year,” Colon shared. So naturally, in this deep a slump, he turned to Jobu three days ago. “I don’t know, man, I had it at home and I looked at him and I thought, ‘I’m going to bring it, just to get the guys going.’ [Drew] Butera gave me this rosary right here for today, but I may have to keep it. Moose has been giving him some shots and stuff.”

One of the best parts about baseball is how superstitious the players can be. They train their asses off all offseason to hone skills they have been developing their entire lives, but if things aren’t going right, their is a jinx or curse that’s to blame. It makes no logical sense at all but it makes the game fun as a fan an probably breaks up the monotony of playing 162 games in 180 days.

Colon bringing in a Jobu doll to channel his inner Pedro Cerrano is on the lighter side of superstitions but there are some that take things a bit too far.

I’m sure they’re more out there. Tweet me the best ones I missed and I’ll try to retweet them.
Follow @BarstoolJJ