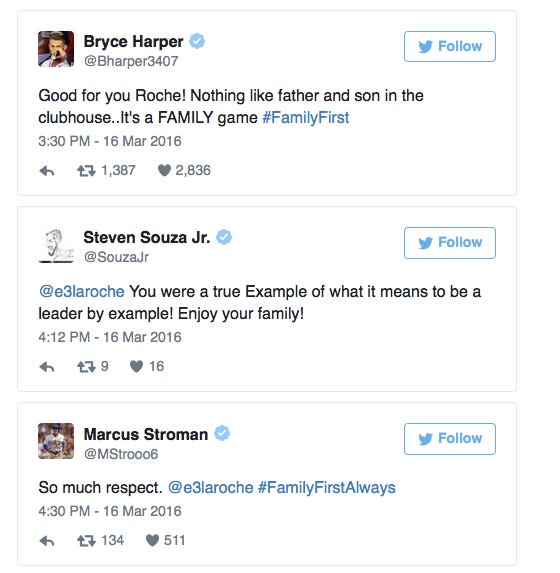 So adam LaRoche retired yesterday because the White Sox asked him to stop having his son around the team 24/7/365, WSD already wrote on it if you’re looking for a good take from a White Sox fan.

But this shit has been pouring in since the announcement. Players acting like he’s some heroic father who left the game to care for his toddler with cancer when in reality he’s on the run with his truant fourteen year old because the LaRoche’s “aren’t big on school” and “he can learn more in a clubhouse,” which I find a little hard to believe.

Look, I’m not gonna tell the guy how to parent, as I have no idea, and if you want to spend more time/every waking second with your kid, then all the power to you. But LaRoche isn’t a fucking deity because he quit baseball after it was decided that his fourteen year old can’t sneakily finish clubhouse beers at Spring Training all March. Not everyone is as in love with your kid as you are (that’s a message to LaRoche and every Facebook user), some people go to work to escape having to deal with little brats. Yet for some reason the guy’s got a hashtag? #FamilyFirst? There’s one man and one man only who puts family first, that’s Dominic Toretto. Adam LaRoche is just a weird dad who wants to hang out with his kid all day with a weird teenager who wants to hang out with his dad all day and probably doesn’t know how to write in cursive or do long division. You want to walk away? Fine. But acting like he’s the most dedicated and loving father ever is just weird. Get the kid off the tit, Adam.