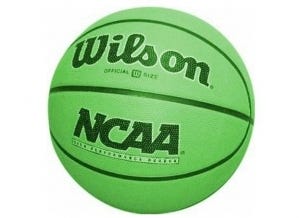 The best time of year is officially upon us. The NCAA Tournament is finally here, and while diehards like myself have been dissecting the likes of Canisius and Mercer for the last 4 months, the rest of the world finally catches up and the whole world will be tuning in to CBS,TruTv, TBS and TNT for their bracket.

While the other sports may have a few nice highlights this weekend, The Tournament is the main course. It’s got the spotlight for the next month , and rightfully so.

So without further ago let’s dive right into the odds, as always via “my guys” at OddsShark.com …..but not without a quick intro … CUE THE MUSIC !

Point Spreads and Totals have been released , the full list is here. Some lines of note that jumped out to me at first glance :

– The highest total of the day is Iona/Iowa State at 166. The casual bettor may think it’s high, but if you’ve watched these two teams who have a Bill Murray in Space Jam mentality of “I don’t do defense” you know that number is attainable. The x factor here is the game is being played in Denver. A lot of people say altitude affects players severely.

– Bob Scucci  of the Boyd Gaming Corp said on Chad Millman’s podcast he expects the average bettor to lay on Baylor -5 , as most  people who haven’t seen Yale think a Big 12 team should pound an Ivy team

– America’s darlings, Florida Gulf Coast has 73% of the public money on them at +22 vs a far more talented UNC team.

-If you haven’t yet filled out a bracket Justin Hartling of OddsShark.com has three last minute ideas for filling one out.

– Our boy Jon Campbell has got you covered with a Cinderellas if you need them, and we know you do. His article says historically the four big criteria for a Cinderella team is they had elite offenses, they needed at least a so-so defense, they shot a lot of 3-pointers and they rebounded well. The full list of teams is in his column, again found here.

Jon Campbell again with a slam dunk of an article diving into a variety of different numbers and stat nuggets for the tournament.

His full list is here. You need to read them all, but here’s my three favorite.

– $9.2 Billion – The estimated amount to be bet this year on the NCAA tournament according to the American Gaming Association.

If you read my column about conference tournament odds, I did pretty well. Had an opportunity for you to hedge Virginia in the ACC title game, as well as giving out both finalists in Oregon and Utah out west, and even a +900 flyer on Seton Hall to win the Big East.

We’ll attack that “value” aspect again here as we look for a sleeper in each region .

It’s clear to me here the value is Xavier or West Virginia. The reasoning in my mind is they don’t have to play Kentucky or UNC until the Elite 8, yet Kentucky is the same odds as WVU despite a much tougher road. I am not fully sold on Wisconsin, so I don’t see Xavier sweating too much in the second round, and 8-1 as a 2 seed is pretty good value. If you want to take a flyer, those two teams are where to go. 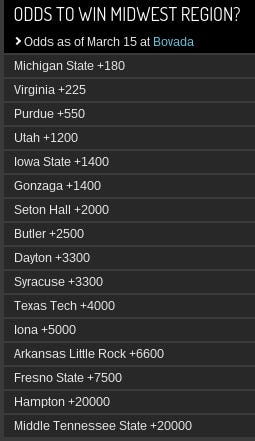 The smart play here is Purdue. I was amazed to see Virginia have a region with teams like Iowa State, Purdue and Michigan State all closer to the Sweet 16 site (Chicago). Virginia is 5-6 in true road games, and has four losses to teams ranked 51-100. Purdue is ranked 19th in Offense and Defensive efficiency, and Matt Painter has more tournament experience as a coach. I personally have Purdue +600 to win the region as I grabbed it right when it came out.

Kansas being plus money here is actually baffling as Cal has now lost leading scorer, and I thought they were going to take this anyway, but that’s boring. For value, Miami and Arizona seem like the play. Big payouts, and a weak Nova in there side of the bracket.

Really good odds here on all four top seeds as this region is the crapshoot region. I toss Oklahoma because they shoot too many threes, I toss Duke because they stink on D, I like A&M but they scare me. Deep flyer here is Baylor +1000 and surprisingly St.Joe’s at +2500.

Oddsshark.com has some great info graphics like this one : 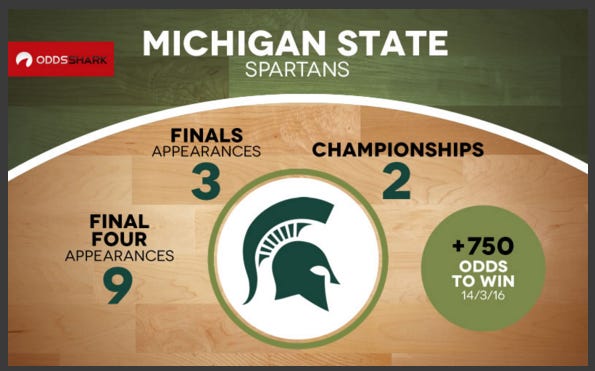 as well as all sorts of props etc here

The Bulls leading scorer  Lamont Beardon has NCAA experience as he was on the team last year that nearly knocked off West Virginia. Granted, Bobby Hurley is gone, but the balanced scoring attack (4 players averaging 10+), plus the fact that Buffalo has played Duke , St. Bonnie’s , and St.Joe’s out of conference thus far tells me they are ready to step up. Like getting a ton of points here.

LOVE the size of Wiltjer, Sabonis. Yes Seton Hall has guards, but again they were never ranked this year, the game is in Denver which does them no favors, and I think they used a lot of energy getting through the Big East tourney, meanwhile Gonzaga is well rested and ready to prove their people wrong about their mediocre season.

Quick reminder… Austin Peay was a .500 team. With the 272nd best offense in the country.

Play of the day

I was on this at 148 and tweeted it out. UNC plays at a very high tempo, but after watching Florida Gulf Coast for the second time the other night, it’s clear they have no concept of holding the ball and may actually be delusional enough to try and run with the way more athletic team. I expect Carolina to score 90 here easily, if not 100. I’ll take my chances with FGCU getting enough garbage to cover.

I was on a few podcasts this week :

This one with Reags , on Storm The Court :

And a special Pick Em with Big Cat and Prez

I wish all the luck to all the Rico Riders, especially Hank.

Ps- If you go the The Barclays this weekend, go get the wings at O’Keefe’s -best in the city.

CFB YTD: +31.15 units College Football 2015-2016 Season, 183-152-7 (+15.8 units) Regular season College Basketball via Twitter, 1-2 in the postseason . For all stats and trends check out OddsShark.com & follow @Rico_Bosco on twitter for all my other picks, NCAA Tournament analysis , Bachelor breakdowns , calls to Mike Francesa, questions, and overall entertainment. 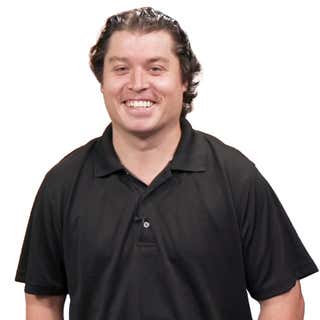