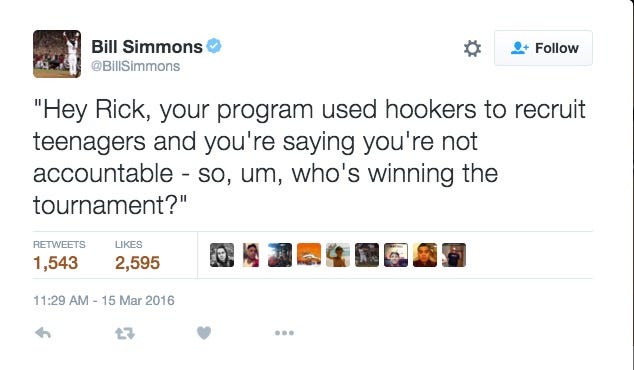 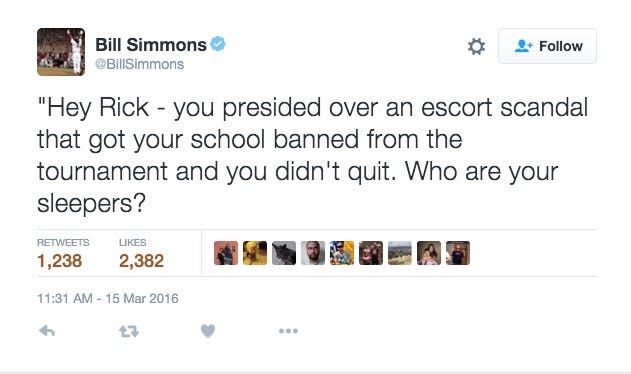 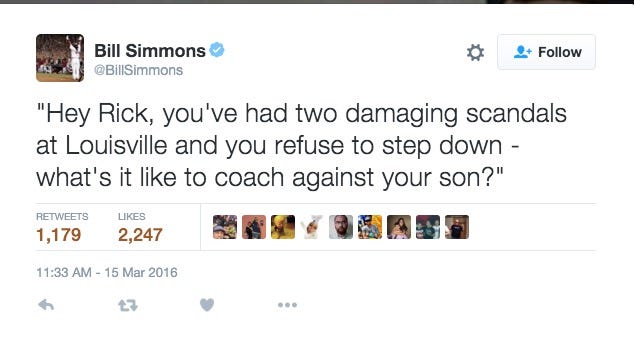 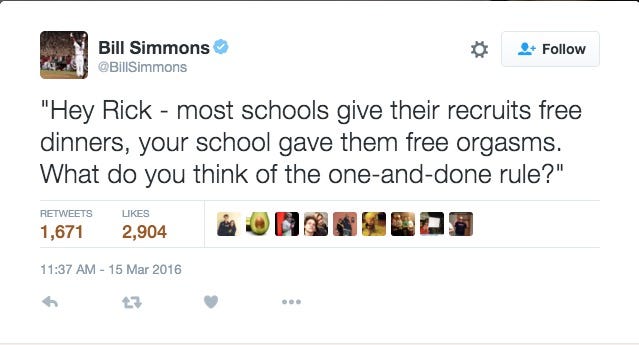 Oooooo kill em Bill. Kept playing that Fall Out Boy song “Light Em Up” in my head as I read these tweets. Nothing better than a nice long rock solid Twitter rant. I mean he’s right. Seriously what is going on with this Pitino thing? Is he really getting such a free pass for this? Does a single person actually believe a single word that comes out of his mouth? That he didn’t know what was going on in his program when he’s Rick fucking Pitino?

Now don’t get me wrong, I OBVIOUSLY don’t care about the allegations here. Throwing parties with strippers and getting recruits laid – I not only think it’s no big deal, I actively support it happening at all programs. But, if the NCAA insists on making rules about this stuff and enforcing them on all the other coaches in college, there’s just no way you can take Pitino seriously when he says it’s basically all a shock to him.

“Well I’m going to tell them that — and it will sound a little bizarre to them — I’ve been a believer in these rules for over 30 years. As a matter of fact, people call me a little bit of a micromanager. We’ve had the highest GPA now in three different conferences every year … we run an extremely disciplined program so there’s a tremendous contradiction of this going on. And to say it breaks my heart would be putting it mildly … if I could just get Andre McGee in a room for 10 minutes I’d say ‘why? why would you do this? What purpose did it serve? We didn’t need this to get recruits. You know we’re not Kentucky where we’re recruiting the one-and-dones. We’re recruiting the Russ Smiths of the world. He’s a two-star athlete who becomes a first team college All-American. Gorgui Dieng, starting for the Minnesota Timberwolves wasn’t ranked in the top 75 … so we have a different way we recruit and it didn’t make any sense what was going on. How these women infiltrated our program was very disturbing to me.”

Haha get the fuck out of here Rick. So full of shit, all the time. 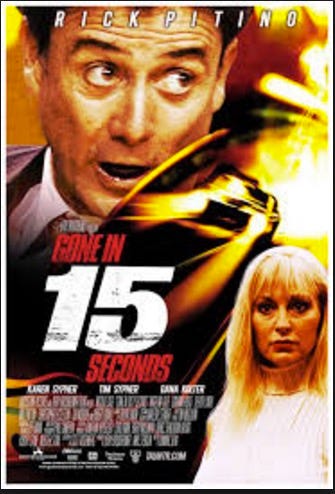 Oh and I don’t blame Mike and Mike by the way, I know Simmons is deadset on going after ESPN but come on, it’s not like they’re Woodward and Bernstein here. They’re Mike and Mike. They put on an entertaining morning show. I don’t turn to them for my investigative reporting.