I have no idea what actually goes in to making a good Supreme Court justice but this guy right here, this guy has the best Judge look of all time. The name*, the old white dude hair that makes him look like he should in a Fidelity commercial sitting at a kitchen table talking about his retirement plan with his wife, the glasses, all of it. Merrick Garland was made to be a Judge. Guy screams Judge from every pore in his body. Just look at this shit. 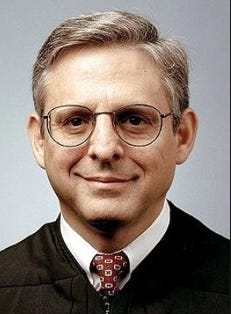 That’s a guy who has read 10,000 books in his life. You can smell the old library smell from here. Probably drinks 2 glasses of wine a week, for the antioxidants, and goes to bed at 7:30 pm every single night. And I know people say you shouldn’t judge a book by it’s cover but that is quite literally how I judge every single book and person. Knee jerk reactions, only way to live. And this guy is a Judge. LOVES to read, loves to talk about judicial process and listen to the symphony. Nerd City, population Merrick. Congrats.

*You name your kid Merrick and he comes out of the womb 50 years old. Merrick’s parents knew what they were doing. Probably threw some glasses on him and put him in a full suit before the first day of Kindergarten. Merrick has been a responsible adult since he was 4 years old.