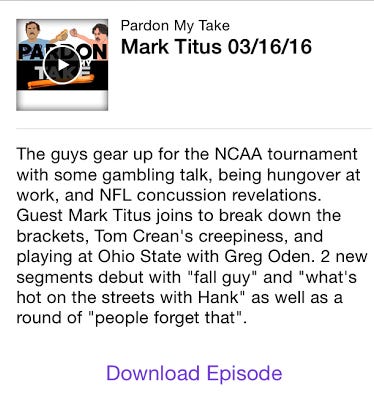 We had Mark Titus on today’s show to breakdown the Tournament and talk about playing with Greg Oden as well as Tom Crean’s utter creepiness. If you aren’t familiar with Mark we got into his backstory at the start of his interview, he’s a really funny guy who has insider knowledge of big time College Basketball and the Tournament.

Also a programming note. We’re going to start releasing these late at night/early early in the morning so that people have them for their morning commute or first few hours at the office when they want to kill themselves. So be on the look out for that and make sure you subscribe on iTunes to get all the new episodes right away. Also can follow Pardon My Take at @PardonMyTake on twitter.