Anyone with a soul’s immediate gut reaction here has to be that they hope Laroche and his family are both okay. This retirement came out of nowhere. It absolutely SHOCKED me when I got the MLB Trade Rumors update just now. Apparently he’s stepping away for “personal reasons,” but hopefully this is only because he’s tired of the game and decided now was the time retire, and not anything more than that. 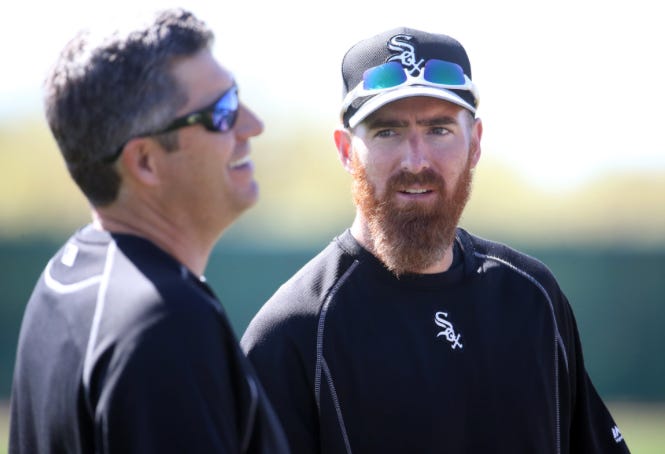 Now, if you’re a Sox fan, you’re second reaction 1 billion percent is this:

There’s already been a lot of talk amongst Sox fans about how they wish Laroche would have made this decision at the beginning of the offseason so Hahn could have made more lucrative offers to blue chip free agents. Look, Yo didn’t wanna leave NY (rightfully so), Gordon didn’t wanna leave KC (rightfully so) and Upton didn’t wanna play for the Sox for whatever reason. Laroche could have retired last September and the Sox were never, ever landing those guys. Would have been nice, but it was never gonna happen. That doesn’t even go into how he might be have legit personal/ real life problems and that he might not have even considered this route before this morning. So that’s all moot.

But what about Fowler or Desmond? It can be argued that Jackson and Rollins fill those voids every bit as good as Fowler and Desmond do, and the Sox still have 3 top 40 picks in June’s draft. Smart, smart organizational management by Hahn. I was the first one to motherfuck the whole organization after passing those guys, but in hindsight, every move they made was most likely the best one they could have.

Make no mistake about it; this COMPLETELY changes how Rick Hahn can attack this season. Considering the budget and constraints he’s had to work around in the 2015-16 offseason, Rick Hahn has done a great job piecing together what could very well be a club that could very well be a contender in the AL Central. Still, and I’ve said it a million times – they’re close, but not totally there. They are one piece away. A LOT has to go right for them to win the division. But guess what? Now Hahn has $13MM in fun money to play around with. So who wants to make a fucking deal??? Here’s a few players off the top of my head that Hahn might be targeting via trade.

– Contract pays him ~$17.5MM this year and in ~$20.5MM in 2017. The Rockies stink, they don’t need to pay him this money, and though they’d be adding about 4ish million to this year’s payroll, that’s PEANUTS compared to Cargo can produce offensively. He’d play right, Jackson in CF, and Avi/Melky in LF/DH, wherever the fuck they wanna stick them. Apparently the Rockies asking price is extremely high for Cargo (top two prospects from inquiring teams, hard pass), which still might not make this trade viable, but I’ll throw it in here as a possibility just because at this point, it is one, however small it might be.

– I’ve touched on both Bruce and Cargo before the Sox signed Jackson, and I think we can all agree that Cargo would provide more boom potential than Bruce, but Bruce is expected to have a nice rebound (apparently he’s fully healthy) and couldn’t possibly be worse than Laroche was in 2015. He can play an adequate OF and his contract is just about a complete wash with Laroche’s. He does have a team option for $13,000,000 in 2017. He also wouldn’t cost the Sox near what Cargo would as far as a prospect package is concerned. I wouldn’t doubt this is who the Sox ultimately land as Laroche’s replacement.

– The Sox back of the rotation (Latos, Johnson, Turner and Danks) have all reportedly been pretty bad to start this spring. Johnson topped out at 89MPH his last start and was consistently 86-87. I can throw that hard, pretty gross. Danks is Danks, he stinks. Turner is constantly hurt and has never had success in The Show, and Latos is a HUGE wild card. A few starting pitchers that are free agents (or have opt out clauses) after next year that the Sox may ask about, should they decide to go that route include Clay Buchholz, Andrew Cashner, Jeremy Hellickson, James Shields. DISCLAIMER: not even sure all of these players current teams are looking to deal them in the least, they just have contracts that are near their completion, so each of these players may be worth inquiring about.

Again, organizationally (I want to stress that part), this is a VERY good thing for the White Sox. Hahn and Co. have to be chomping at the bit to use this money to add to an already pretty solid roster. At least we hope/expect that’s the case. 2016 just got a shit ton more exciting.