Let’s talk about Raw from last night. Actually let’s stop for a second and note all those cheers in the above video were actually boos. Great post-production editing by WWE to make it seem like Reigns got a pop when really it was a showering of boos. It was pretty awkward.

But now let’s talk about it. Reigns came back after a couple weeks off TV to what was supposed to be a big face pop. Instead, boos rained down on him as he beat the shit out of HHH. What a novel idea! Have your huge, big baby face beat up the top heel! Amazing concept! Remember when Reigns snapped after the PPV in Boston and in Philly and finally got over? Same thing. The crowd likes when Reigns is vicious. He’s a monster, let him eat. But instead they have held him back, trying to mold him into Cena pt. 2, which clearly hasn’t worked for 2 years. So now with just 2 weeks until Mania, they seem to be redoing Reigns’ entire character in a last-ditch effort to get him over. And it’s about fucking time. He’s not a Cena. He’s not going to get on the mic and play with the crowd and cut a good promo. For whatever reason (Vince), they have been pushing that agenda with him for 2 years. If last night was any indication, they might finally be letting that go. I’ve been saying for months and months how Reigns is the perfect Lesnar-esque character who is silent but deadly. Takes care of business without cutting cookie-cutter promos. And yes, I do believe he can get over as a face that way, but it’s ridiculous it’s taken this long for them to realize it. I take that back- of course 95% of people realized it, but we are still in the “what Vince wants, Vince gets” era. If there was ever something you needed to point at to make you realize Vince is holding this company back, it’s the way Reigns has been booked, written, and pushed for 2 years until Vince dug himself so deep into a hole he has been forced to scurry and change everything. It was the same with how he gave the “fuck you” to the audience with the Daniel Bryan situation. Vince has got to go.

The other big takeaway from last night’s Raw was the Undertaker vs Shane match is losing it’s luster. Seriously. Last night’s promo which closed out Raw could not have been more awkward. Shane’s mic skills have gone the way of Undertaker’s hair. The entire allure of Undertaker wrestling at Mania is he’s the deadman- he’s the hired gun, he’s the assassin. But standing in the ring last night, he just looked old. And Shane did the match no favors by stumbling over every word on the mic. All the hype and the excitement for Shane vs Undertaker got watered down a bit last night when it became abundantly clear these definitelyyyyy are not the same Shane and Taker we are used to. I still fully believe they are going to put on a great match, don’t get me wrong, but last night was just so awkward between them. Sometimes less is more.

What else? Ziggler cut a pretty good promo about how he’s always being threatened with being fired, but he still shows up, still wants to be the best, etc. It was refreshing to see Ziggler get a semi-push like that, as he’s been booked terribly, horribly, horrifically for the last year to the point where he’s so completely stale. But last night he confronted Steph and HHH in a pipebomb-esque way, and it worked. He then got a match with HHH that if he won, he would be granted a match at Wrestlemania. So the obvious result was going to be him winning via Reigns interference, right? Wrong. HHH pinned Ziggler clean in the middle of the ring and we never heard from Ziggler the rest of the night. Oh. Cool. So basically they had Ziggler cut that whole promo about how he can be the best and how much he wants it only to make him lose clean, just to prove a point. Hopefully this story builds, because I like Ziggler in the CM Punk role, but it wouldn’t shock me if Ziggler is fighting Adam Rose at house shows in Biloxi for the next 6 months either.

We can talk about Ambrose vs Lesnar. Remember when Lesnar attacked Ambrose in the parking lot and then the entire focus of the company switched to Ambrose vs HHH for a few weeks? And now we are back to Ambrose vs Lesnar again. Just bad writing. I’m sure they are going to put on a great match. I’m sure Ambrose is going to suffer multiple concussions during it. And I’m sure this match will push Ambrose into locking up, far and away, the top face spot on the roster. Which is why Reigns needs to be heel so, so badly. Heel Reigns vs babyface Ambrose has Rock vs Austin rivalry potential. Mix in Rollins when he gets back and the future of the company is in great hands. They just won’t do it.

However, these two together was awesome to see. 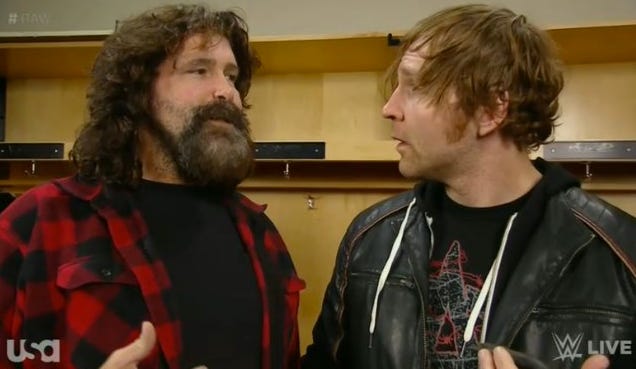 As was Foley passing the hardcore torch to Ambrose. 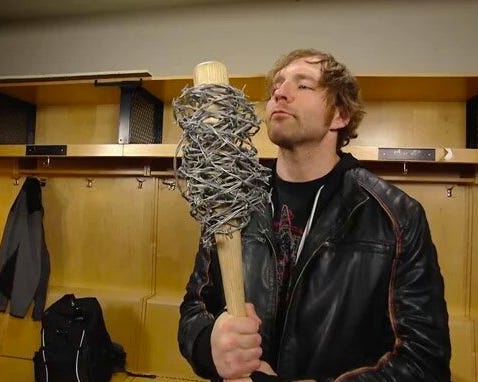 Gotta give a shout out to my guy Neville. I’m such a Neville guy, absolutely sucks that he broke his shin and his ankle last night. I love him and wanted him to go bananas in a Wrestlemania match, and now that won’t happen. Sucks.

Where the fuck was Sasha Banks last night? She should be on every Raw, every Smackdown, every everything. Figure it out, WWE. Sidenote: I watched Bayley vs Sasha from NXT Brooklyn the other night. Still the match of the year even though it happened in 2015. The video package before it was perfect as well. 2 years of perfect booking and writing leading to that match. We might never seen something done that well for a long, long time.

No Bray Wyatt either. Oh how the mighty have fallen. Well, never really that mighty considering he is the weakest booked monster heel in professional wrestling history. I wish they could have a do-over with him. So much potential. So poorly executed. Will he even be at Mania? Why can’t WWE book heels correctly? So frustrating.

The Usos still stink. The fact they have a match with the Dudleys at Mania stinks. Everything about the tag team division (besides the New Day) stinks.

Heel Y2J is the best Y2J. He’s not in the best shape, isn’t doing the best matches, but he’s doing great heel work and did a great job ending the match last night when he realized Neville was hurt. Y2J should be holding backstage seminars on how to get heel heat on the mic.