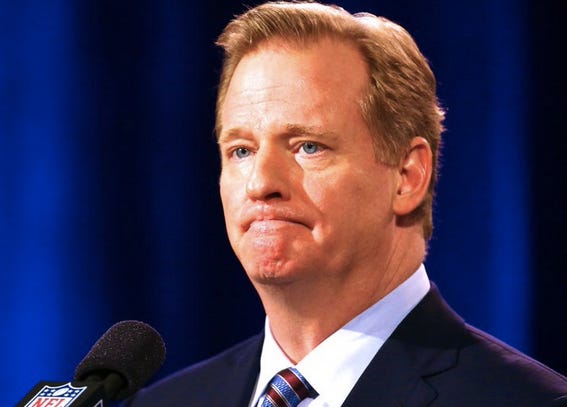 (Source) — A discussion about concussion research on Capitol Hill brought a startling moment Monday, as an NFL executive acknowledged for the first time that football has been linked to a degenerative brain disease. Jeff Miller, the NFL’s executive vice president for health and safety, admitted the connection when he was asked about research by Boston University neuropathologist Dr. Ann McKee, who has reported finding signs of chronic traumatic encephalopathy in the brains of 90 out of 94 former pro football players – and 45 out of 55 former college players. Both Miller and McKee were testifying at the hearing by the House Committee on Energy & Commerce. After McKee urged taking steps “immediately” to limit the risk to young athletes, Rep. Jan Schakowsky (D-Ill.), asked Miller if he thinks football and CTE are linked.

Everyone’s being snarky about this today but I’ll tell you what, I’m impressed with the NFL here. It takes a big man to stand-up and say, “All of that incontrovertible science is probably correct,” and that’s exactly what the NFL did here. They could have gone on for centuries longer using the time-honored rebuttal of, “Not uh,” and gotten away with it but, instead, they elected to remove their fingers from their ears, stop screaming “LALLALALALALA,” and accept some blame on this one.

I mean, let’s look at the organization that most closely resembles the NFL, the Catholic church. Both have an all-powerful and just leader, both dominate Sundays, both are regularly rife with scandal, and both have their detractors that just open a science book and say, “See? You are incorrect.” The NFL could have handled this like the Church handles “evolution,” whatever that word means, and claimed that, while all the existing evidence is cute and all, their story is better. But they didn’t. The NFL finally admitted that slamming your head into other heads probably isn’t good for heads. Gotta give them a golf clap on that one. Next thing you know soccer moms are going to come down off their 15 year white wine buzz and concede that vaccinations can’t make their kid autistic.

Update: The NFL is calling take backsies. Only the experts are at liberty to speak of connections. Sure, it’s pretty simple to read that 90 of 94 football brains have CTE so there’s probably a connection, but you’re not an expert and neither are they. None of us really know.

The NFL’s apparent reversal of its stance between there being a link between football and the degenerative brain disease chronic traumatic encephalopathy (CTE) didn’t last long. The league issued a statement hours after Jeff Miller, the NFL’s senior vice president of health and safety, told a congressional committee on Monday that “certainly” research by Boston University neuropathologist Ann McKee, one of the nation’s top concussion researchers, had established a link. “He was discussing Dr. Mckee’s findings and made the additional point that a lot more questions need to be answered,” NFL spokesman Brian McCarthy said in a statement.  “He said that the experts should speak to the state of the science.”