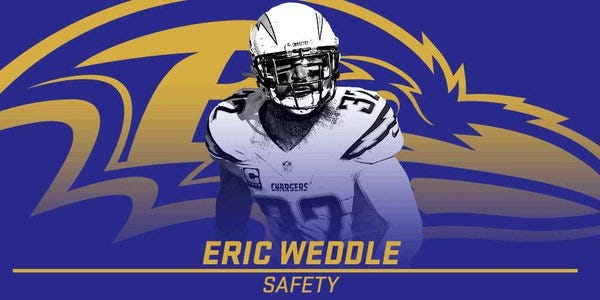 PFT — New Ravens safety Eric Weddle told Kevin Acee of the San Diego Union-Tribune Monday that the Ravens were the first team to make him a contract offer and that Weddle ultimately chose to sign with the Ravens because he felt wanted and valued. “There is a reason why they’re the Ravens – the culture, the winning – and it just showed throughout the whole process,” Weddle said. “They were adamant about what they thought about me, what I bring, how I could help on and off the field. “At the end of the day, it was just their continued effort. And it wasn’t just the contract stuff. It was what they said, what they thought, how we talked. They just showed me they want me.” Per Acee, Weddle chose the Ravens over the Raiders, Cowboys and Steelers. He will sign a four-year deal worth as much as $29 million with $13 million guaranteed and be formally introduced in Baltimore Wednesday. “You think of Baltimore, you think of winning, you think defense, you think blue collar, grinding, guys working together,” Weddle said. “When I went to bed (Sunday) night and I was trying to decide which team, Baltimore just kept popping in my head. When it comes down to it, my heart was there.” Weddle, 31, had played with the Chargers since they selected him in the second round in 2007. He went to three Pro Bowls and was twice named All-Pro. Before being placed on injured reserve against his wishes last December, he hadn’t missed a game since 2009.

Yesterday the Ravens went out on a limb and addressed a problem that’s haunted the team since they last hoisted the Lombardi Trophy. The secondary has been a sieve across the board. Whether it was at corner or at safety, the Ravens have struggled with players who have fallen far short of expectations. Throw in a crippling case of the injury bug, and you’ve got the disaster we’ve watched in Baltimore the last 3 years. I mean shit, the secondary probably cost the 2014 Ravens a trip to the Super Bowl after blowing multiple 14 point leads in New England. So Ozzie Newsome decided enough was enough and went out and signed the best safety money could buy in free agency.

To be honest, I was a bit uneasy about the idea of Weddle early in the offseason. I wanted an ace in the secondary, and I was pretty narrow-minded on achieving that through the draft. As it became clear that Jalen Ramsey, who I already thought was a longshot, was surely not going to fall all the way to #6, it became time to shift gears. Little did I know that Ozzie was miles ahead of my brain, which is why he makes the big bucks and I make peanuts staring at UltraTax from 9-5. Eric Weddle was the apple in Ozzie’s eye from the start, which is why we saw Jimmy Smith and Marshal Yanda convert some of their base salary into a signing bonus in order to free the cap space to sign Weddle.

That’s what I love most about this signing. It’s not necessarily the fact that Weddle’s a 2-time All-Pro. Accolades are nice, but they’re exactly that. Accolades. They’re no promise of future success. What I love is that Ozzie went in with a plan and was determined to get his man. When he zones in on specific guys like this, he doesn’t miss. Let me tell you all a little story. 2 years ago, Baltimore was Steve Smith’s first visit on a tour of free agent meetings. Before embarking on his tour, he voiced his excitement to shop around and be schmoozed by NFL front offices. When Steve came to Baltimore, Ozzie and Bisciotti literally would not let Steve get on a flight to New England for his next meeting without getting his signature on the dotted line. They made him feel wanted, they showed him it was the place he needed to be, and so it was. Steve Smith has been a pretty damn good signing, wouldn’t ya say? Weddle got the same treatment and now he’s a Raven. If Ozzie’s all in, then so am I. And we’ll see how Ozzie feels about Mike Wallace as he visits Baltimore today.

There will be ramifications for some of the guys in the secondary. Earlier in the offseason, it was declared that Lardarius Webb will be moving to safety, which gave us a foursome of Webb, Will Hill, Kendrick Lewis, and Matt Elam at safety. The way I see it, Will Hill is the guy to start alongside Weddle. Both are experienced safeties who complement each other well, with Weddle playing a more physical game and Hill playing more of the proverbial centerfield. Unfortunately, it’s looking a lot like somebody’s gonna have to go, and it just might be Webb. Webb and Weddle basically bring the same skillset to the table. Both have good ball skills and will lay a guy out. Weddle has just, ya know, actually played safety for close to a decade. Cutting Webb after June 1 would save $3.5M. It’ll be interesting to see whether Ozzie can find a use for him at that price, or if that potential cap space is too much to pass up. Lewis or Elam, by the way, could get cut just because they stink.

Either way, Weddle is a Raven. 4 years is a lot to commit to a 31 year old safety, but the contract is front-loaded so he won’t be a cap burden as he declines with age. And he very well could retire before he gets to that 4th year anyway. This secondary needed a leader back there who knows how to direct traffic in a league that sees teams go to the air more and more every year. 2016 is looking up!